Virtual Reality Is Growing: But For UC and Call Centers, Not Video Games 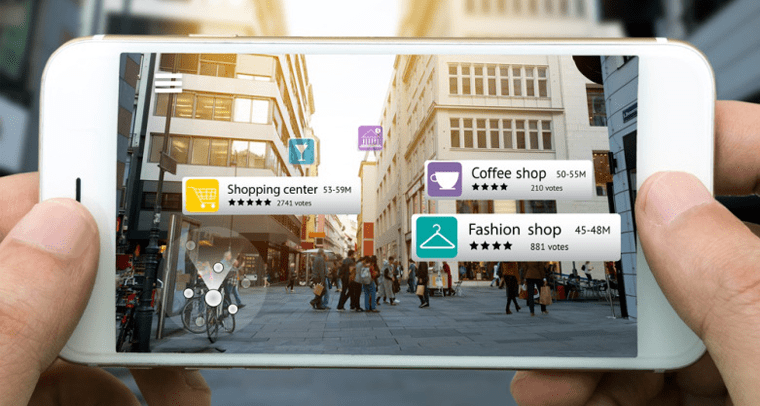 Between all the advancements in Artificial Intelligence, Machine Learning and now even Virtual Reality, its almost as if we are living in a period when science fiction is no longer just fiction. While our reality is still a bit distant from the developed technologies dreamed up by authors and directors for decades, we really are getting close.

Virtual reality was once a cheap gimmick reserved for arcades and amusement parks; now, it’s poised to be one of the largest tech industries if the expected growth continues. In fact, back in 2016, the virtual reality market was estimated to reach $162 billion by 2020. With big names like Facebook jumping on the consumer end of VR, the projection was made with confidence — at least for the consumer sector. Despite the projections, though, VR hasn’t quite made its way into the living room of every house hold.

But, entertainment isn’t the only use case for VR. Businesses are recognizing that VR and its sister tech, augmented reality, are going to revolutionize the way we work. Consumer applications may not have taken off, but it certainly looks like business applications will. Just look at AI in the Contact Center already.

What are VR and AR?

Both virtual and augmented reality are no longer science fiction — the technology is here, at least to a certain degree. At this point, most of us are at least aware of what virtual reality is.

Virtual Reality: For games and movies, users wear a headset hooked up to a computer, or sometimes game console, and users are immersed in that world.  If the mover moves his head to the right, his vision inside the VR helmet scans to the right. Motion controls and spatial tracking up the ante even further for true immersion.

On the other hand, augmented reality can be seen as a mix of VR and, well, reality.

Augmented reality: Users generally wear glasses or goggles, instead of a bulky headset, in order to impose digital graphics and information over the real world. Of course, the largest known instance of augmented reality would be the Pokémon Go phone game — users walk around looking through their phone’s camera, and game elements are overlaid on the display. 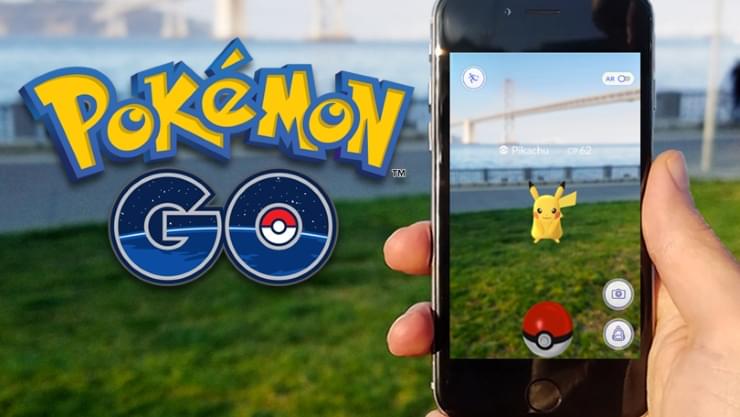 So with VR acting as a total transplant into another reality, and AR acting as the combination of digital and the real world, these technologies can be leveraged in unique ways.

A Big Boom for The New Tech

The issue many are noticing is that VR and AR are not currently on the path to meet the original 2016 projections, especially when it comes to the consumer market. Because of points we will get into later, VR content for consumer entertainment is still in its infancy.

In the same report, Tractica also forecasts that the push for this new technology will be lead by training, simulation, and education applications. Beyond that, however, Enterprise VR content categories will also include virtual prototyping and 3D modeling, public entertainment attractions, and medical therapy. 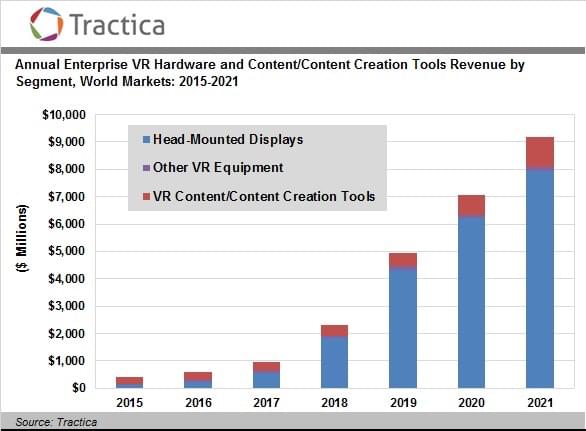 But if you want more numbers, the report also estimates that “the addressable market for the five largest areas where enterprise VR will grow will be worth over $1 trillion in 2017.” The report also highlighted the expected revenues by segment in world markets up to 2021. At this point, its almost safe to say that Business VR is already on its way up.

Why Business, But Not Consumer Growth?

Despite the massive growth projection, consumer and entertainment-based VR hasn’t caught on as it was expected to. This isn’t necessarily indicative of the technology’s potential. Rather, the true potential is currently held back by a few factors. But, despite the lack of consumer adoption, enterprise VR and AR adoption will continue to increase.

Unified Communications alone can see a massive boost from AR and VR, offering entirely new ways to communicate with even more context and depth. Just like we see in our current collaboration tools, context is absolutely key. Video is already considered a leader for this reason. Add in the ability to see exactly what the other end of the conversation is seeing, and UC has a whole new use case thanks to VR technology.

First, we should take a look at just why consumer VR hasn’t caught on as expected. Again, according to Tractica’s report:

Simply put, the cost of current consumer grade VR headsets and devices is too expensive. For example, the most popular gaming headsets are produced by Oculus and VIVE. These headsets range anywhere from $700 to $900, which alone is a massive cost for what can be otherwise seen as a computer peripheral. We can purchase 4k TVs for less than that already. As if the headset’s price isn’t enough, the computing power required of both the CPU and GPU to even run VR content at an acceptable frame rate and resolution is above the mainstream.

In fact, Tractica estimates that within “the global installed base of more than 2 billion PCs, only about 10 million machines meet the requirements to run” VR headsets and content. The PS4 VR headset costs less, but the quality and experience doesn’t hold a candle to its PC equivalents. A PS4 simply does not have the necessary computing power.

A second nail in the coffin that goes hand-in-hand with the intense hardware requirements is the degradation of quality in VR content. If the framerate of VR content dips below a required limit, users can experience frozen video, jitters, skipping frames, or streaking effects that simply ruin the immersion.

But “even worse, a VR user can become nauseous and experience motion sickness” due to these stutters. Beyond just the video, VR relies on tracking equipment for users to interact with the virtual world, and associated issues can lead to frustrating and unpleasant experiences. Simply put, the hardware is limiting the potential of the VR content currently.

As technology is further developed, we will see a reduction in cost of headsets and potentially “all-in-one” systems that will remove the expensive hardware requirements. Advanced tracking sensors built into the units and built in spatial awareness will also help reduce the cost and burden of the technology on consumers. So, while VR and AR aren’t the best of the best for the consumer yet, there are still many driving factors behind enterprise adoption:

The Benefits of both VR and AR

So, we know that it would be a good idea to bring VR and AR into the business world. We know it already exists in things like call and contact center software, and we know it will be a huge source of revenue and investment for the next few years.

But, you may be wondering why VR is so important, and what benefits can this technology bring to your business. Quite frankly, the list could be  endless, but we’ll just touch on a few major points:

Overall, VR and AR in the enterprise can actually offer an entirely new use case for the interactive digital whiteboards that seem to be growing in popularity, just like Google’s Jamboard.

We don’t actually have to wait very long to see some real world uses for VR and AR. Education, healthcare, and even retail businesses are leading the way for adoption. For example, back when Apple announced the new iOS 11 Business features at WWDC, they also introduced their new ARKit technology. ARKit is about inviting third-party developers to build entirely new apps with augmented reality experiences for iPhone and iPad devices. 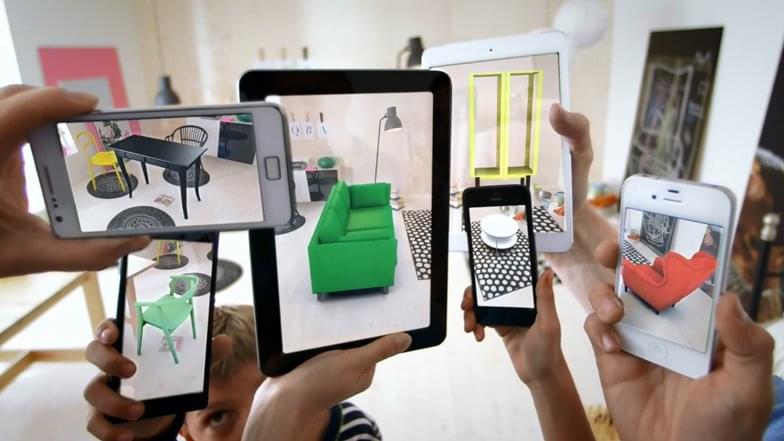 Ikea also recently made news after they announced they are building an entirely new AR app leveraging the ARKit technology from Apple. Essentially, Ikea is building an app that will present users with “realistic 3D renders of 500-600 pieces of furniture upon its launch.”  So, building off our use cases before, Ikea is establishing a new method of product presentation by allowing viewers to get a virtual glimpse into what that piece of furniture might look like in their home. As time goes on, Ikea is hoping to build in buying functions to the app as well.

We really are living in the future, and we should absolutely expect to see more and more of VR and AR as time goes on. I’ll leave you with the words of Apple’s Tim Cook during an interview he had with The Independent:

“I regard it as a big idea, like the smartphone,” Cook said. “The smartphone is for everyone, we don’t have to think the iPhone is about a certain demographic, or country or vertical market: it’s for everyone. I think AR is that big, it’s huge. I get excited because of the things that could be done that could improve a lot of lives.”