What is HD Voice and How Does it Work? 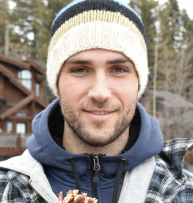 But how does HD Voice work, and what should users consider before implementing it?

This article will outline HD Voice, including how it works, network requirements, key benefits, and factors to consider before implementing HD Voice.

What is HD Voice?

Most VoIP and mobile phone providers support HD Voice, as it can transmit over the internet, 5G, 4G LTE, and even Bluetooth–this means you can access it on your mobile device, business VoIP system, and home VoIP system.

How Does HD Voice Work?

HD voice calling works by compressing and transmitting a high frequency-range analog signal with a high sample rate and bitrate.

This increased call clarity is thanks to codecs, the computer code technology that determines the quality of sound transmission. A combination of the words compress and decompress, codecs take an analog sound and convert it into a digital data format so that it can be decompressed by the receiving codec in another device.

Codec software exists in desktop and mobile devices and can transmit wideband audio frequencies via the internet, Bluetooth, traditional PSTN landline, as well as 4G LTE networks using voice over LTE (voLTE). This is why Apple iPhones, Android phones, Samsung, AT&T, Verizon, and many other smartphone and mobile providers–in addition to VoIP providers–support HD voice.

While codecs compress all sorts of media–like videos into .mov files and images into .jpeg files–audio codecs determine the sound transmission’s signal frequency, sample rate, and bitrate, which are all critical components of the high-definition sound quality.

While the human voice frequency ranges from 50 to 7,000 Hz, a traditional PSTN phone connection with narrowband audio transmits voice frequencies between 300 and 3,400 Hz–cutting out the speaker’s lowest and highest pitches, leading to fuzzier, duller sound quality.

In contrast, codecs in HD Voice-capable devices – with wideband audio – transmit audio frequencies between 50 and 20,000 Hz, covering many of the human voice’s natural higher and lower sounds, leading to clearer, more realistic-sounding audio over mobile and VoIP headphones, hardphones, and softphones.

Sample rate is the number of audio samples the codec takes per second in order to compress and transmit the most accurate frequency possible. The higher the sample rate, the better the audio quality.

Bitrate is measured in kilobits per second (Kbps). While a high bitrate generally means better quality, larger amounts of data demand more network bandwidth. Some network connections with lots of simultaneous calls prefer to use codecs with lower bitrates to conserve bandwidth.

Both traditional PSTN and modern HD Voice codecs have bitrates around 64 Kbps, while many carriers today support the G.729 codec with an 8 Kbps bitrate. Opus, a state-of-the-art codec, has a flexible bitrate that can range from 6-510 Kbps, depending on user demands and network crowdedness.

Here are today’s most popular codecs and their key features: 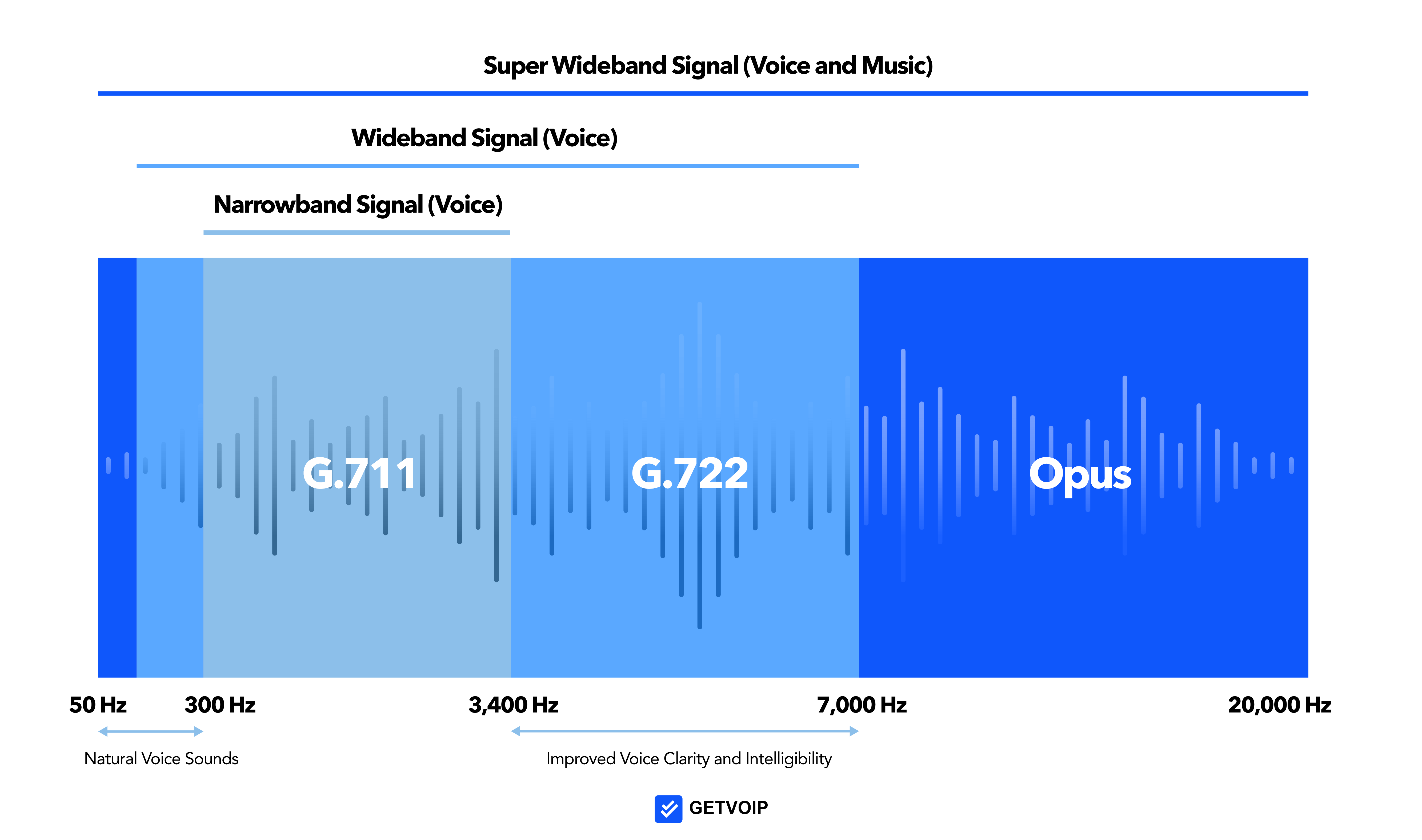 Before integrating HD Voice, consider if your setup meets the following bandwidth and hardware requirements.

Regardless of which codec your VoIP devices use, you should reserve at least 100 Kbps of data per VoIP call.

Most internet connections today support a bandwidth between 20,000 and 1,200,000 Kbps (200-1200 Mbps), and most high-quality routers support anywhere between 40,000 and 80,000 Kbps–so a good router and internet provider will support dozens of HD Voice calls within a network.

In order to make an HD call on a 4G, 5G, or VoIP network, your provider must support one of the following codecs: G.722, AMR-WB (G.722.2), Enhanced Voice Service (EVS), or Opus. Luckily, most providers support several of these codecs.

Noise cancellation is supported by nearly all of today’s VoIP hardware providers, including Ooma, Avaya, Yealink, Cisco, Polycom, and more.

Here are some of our favorite HD Voice benefits:

During HD Voice conference calls, when multiple users speak at once, it’s easier to distinguish each individual’s voice and what each participant says, reducing the need for repetition – and lowering frustration levels.

A popular feature among VoIP users, voicemail transcriptions can sometimes frustrate users with inaccurate transcription, which occurs more often when the incoming speech is fuzzy or unclear.

Customers expect fast service. When poor call quality forces agents and customers to repeat themselves, both parties become frustrated, harming relationships and the customer’s perception of your company.

All phone numbers and devices in a VoIP call must use the same codec, and most network providers support multiple codecs. When a call connects, the mobile or VoIP phone system automatically utilizes the most optimal codec shared by both parties and supported by bandwidth.

Multiple team members sharing an internet connection and VoIP provider can use different codecs for simultaneous calls, taking advantage of as much network bandwidth as possible.

Since mobile devices and VoIP PBX systems already contain the codecs and noise-cancellation materials for HD Voice, your phone system automatically provides the highest audio quality possible during every call–no need to install or enable anything.

If you want to disable HD Voice, you can switch to your phone carrier network on your VoIP or mobile provider’s Settings page.

What to Consider Before Switching to HD Voice Calling

Before selecting an HD Voice service provider, consider the following:

While nearly all phone service providers offer HD Voice and a G.711 narrowband codec, many offer even stronger options, like G.722 and Opus codecs.

Select a company with codecs that fit your network’s bandwidth demands while providing the highest frequency and sample rate possible.

Use your network’s call and data volume to calculate how much bandwidth you will need to support all callers simultaneously using HD Voice, Also consider other bandwidth-heavy applications like video conferencing, streaming, gaming, and cloud-based apps.

In your router’s Settings menu, view the following information for individual devices or the entire network:

If your network already uses most of your bandwidth before adding HD Voice, you may need to remove devices, applications, or strengthen your network via an added router.

Nearly all VoIP and mobile providers offer HD Voice technology as part of their standard voice plans. However, each pricing plan has unique features and tiers.

When selecting a VoIP provider, in addition to the provider’s codec and HD Voice offerings, consider the features they offer alongside HD Voice–video conferencing, texting, auto attendants, and other features.

The table below lists some of our favorite HD-Voice VoIP providers.

Is HD Voice Right for Your Company?

VoIP with HD Voice not only provides clearer audio quality on mobile, desktop softphone, or desk phone–it’s also more affordable than most traditional phone systems, easy to set up, and will help your company take advantage of all available network bandwidth.

To learn more, check out our list of today’s top business VoIP providers.

Most VoIP providers include HD Voice in their business phone plans, so HD Voice costs the plan’s monthly subscription.

Get HD Voice by signing up with a VoIP provider today, then using the desktop softphone, mobile app, or HD-voice-compatible desk phone.

Tyler Webb
Tyler Webb is a California-based writer and business technology researcher who presents communication tools and trends in clear, concise language. Before beginning his technology-writing career this year with GetVoIP, Tyler taught high school...
More posts from this author