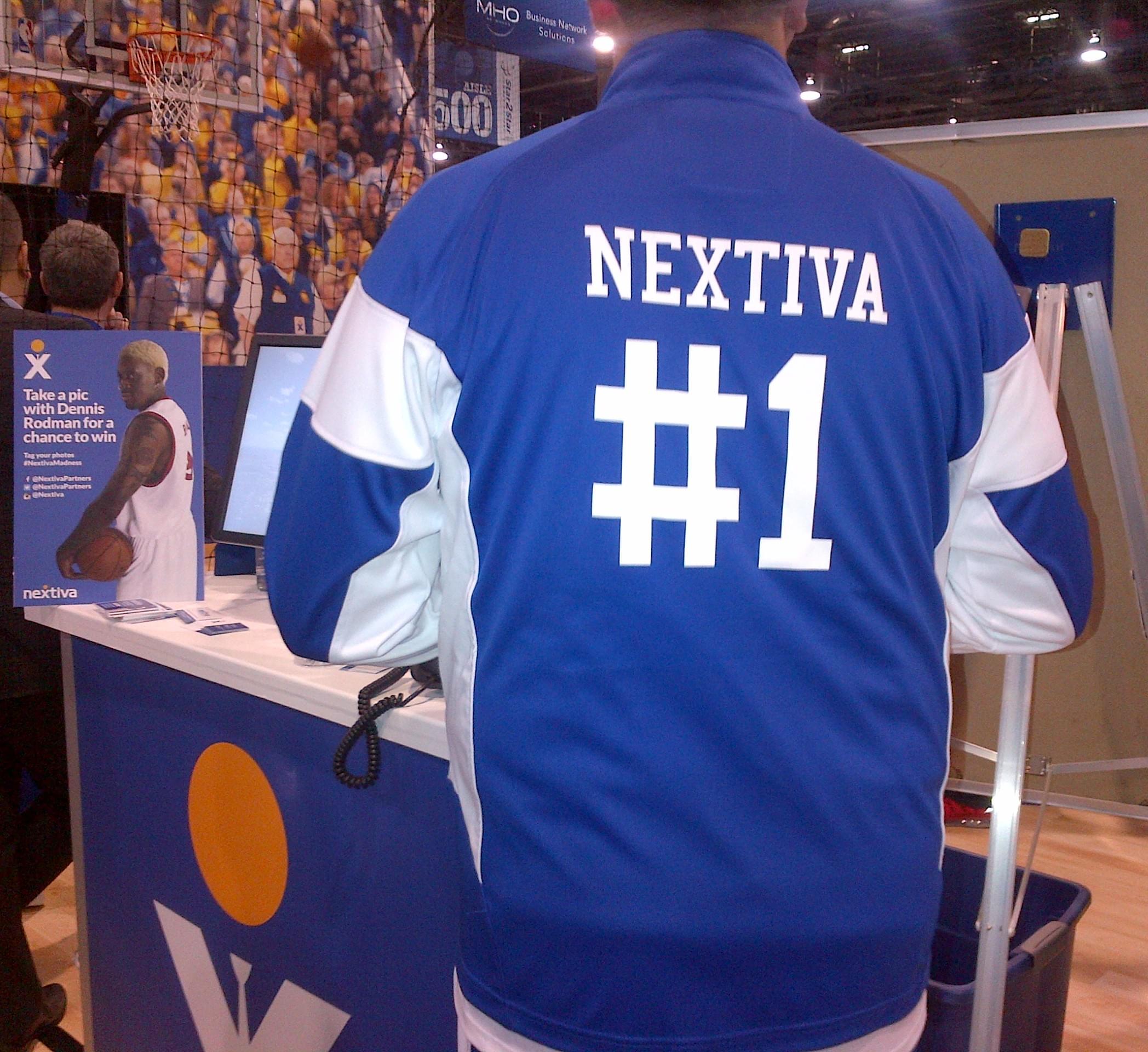 The Channel Partners Conference in Las Vegas was a non-stop rush of meetings and sessions, including a long sit-down session with Nextiva. This is definitely a company on the rise, and I got a better sense of this after speaking with their President, Tracy Conrad, and Ira Feuerstein, their National Director of Channel Sales.

Before getting to my takeaways, let me explain the title of this post. Exhibitors will try anything to draw traffic, and for this event, Nextiva went the celebrity athlete route. There are always inherent risks with this approach, and Dennis Rodman wouldn’t have been my first choice. However, it was definitely fun, and they built a whole free throw competition around this with a chance to compete against Rodman. I get the whole spirit of competing to win, plus it was a great tie-in with March Madness – and St. Patrick’s Day to boot. 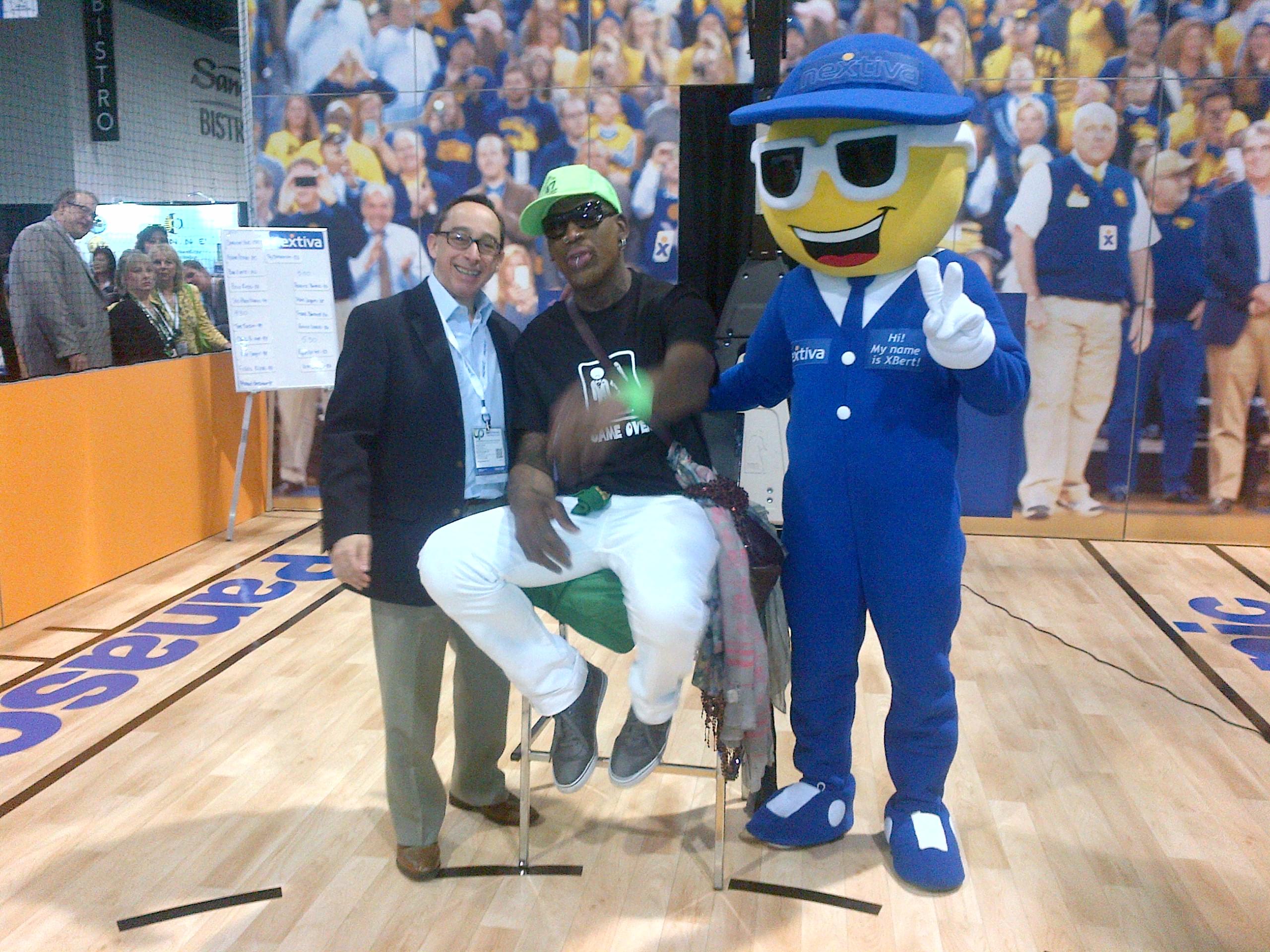 Well, it certainly drew the crowds, and Rodman’s notoriety added to the curiosity factor. With all that going on, though, I don’t know if anyone saw a logical connection between him and Nextiva. I’m not even sure if Nextiva saw it, but it was clear to me. For those who remember Rodman’s heyday, his legacy was being the best rebounder, perhaps of all time.  When it came to winning the loose balls after missed shots, nobody did it better.  That seems pretty apt for Nextiva, a company with a Rodman-like intensity to be competitive and win their share of battles when business is in play.

Based on my session with Tracy and Ira, here are three takeaways that helped me understand why they’ve been so successful.

Takeaway #1 – Working with The Right Partners

Currently, Nextiva supports over 5,000 partners, but for them, it’s not about having the biggest number. This volume-based approach may be the industry norm, but Nextiva would rather focus on having the right partners, especially in a market that’s undergoing so much change. As we know, the world is shifting from hardware to software, along with premise-based to the cloud hosted PBX.

For Nextiva, the right kind of partner is one that’s both willing and able to adapt to these changes, since this is where the future lies. There is no shortage of partners happy to sell hosted Web and data services or even legacy voice, but that’s not who Nextiva is interested in. Data is easy to sell, but it’s a commodity, and many MSPs would rather not sell telephony.

Where Nextiva has had success is finding partners that do want to sell voice, but not just conventional desktop telephony. That business is also a commodity, where the channel does little more than provide a few quotes and the buyer usually goes with the lowest price. There’s no value-add there, so Nextiva has been more selective, working with partners that see telephony as part of a broader offering that ties voice into data. Now the channel becomes a “solutions architect”, and that requires a deeper understanding around network integration, security, quality of service, etc. That’s the kind of partner Nextiva is focused on.

They also look for strategic fits, especially among “non-traditional” partners with deep customer relationships. Panasonic was cited as a prime example, where their extensive range of voice and video endpoints makes for a complete solution with Nextiva that partners can sell on a turnkey basis. Aside from that, Panasonic’s national dealer network becomes another route to market, complementing Nextiva’s more traditional mix of partners.

Takeaway #2 – Focused on Being Partner-centric

Unlike most players in this space, Nextiva relied on direct selling, and have only had a channel program the last two years. Scaling for growth is natural challenge with the direct model, but more importantly, Nextiva saw gaps in how partners were being supported by their competitors. In a sense, starting with a clean slate gave them an advantage. They could offer programs that don’t have quotas and provide the kind of marketing support based on today’s Web-based systems that channels haven’t been getting.

Being partner-centric means working closely with channels to build personal relationships, upon which trust will grow. Nextiva is a high-touch organization, and that message came through clearly in our conversation. They know that today, buyers do a lot of their own research online before engaging with the channel. To add value, the channel has to provide something more, and this is where that high-touch approach pays off – “we’re obsessed with improving and asking how we can make the partner experience better”.

This focus also shows partners that Nextiva is different and that older patterns won’t be repeated.  For too long, channels have seen partners do end-arounds to poach customers and cut commissions when their business was soft. Acquisitions happen all the time, and things often don’t work like they used to when that happens to a provider or a vendor. These are common examples as to why channels are skeptical when another partner program comes along. To counter that, Nextiva seems committed to building trust and earning their business by not doing these things. Their track record is short, but momentum is strong, so we’ll just have to see if they can keep walking the walk.

These qualities will have a lot to do with that, and the good news is that the bar has been set very low in this industry. I have no doubt this is the opportunity Nextiva saw when they decided to go the channel route. As noted during our session, “this space is ripe for innovation – it’s not just about dial tone”. They value partners who can sell telephony, but they’ll value them even more when they think bigger, especially around collaboration, and making communications a strategic sale.

Given their rapid success building out a channel network, it’s fair to say that the market has responded positively to Nextiva’s focus on providing proper service and support. They noted that “carriers can get complacent with their partner programs and they stop innovating”. That sums it up pretty well and is another indication as to why they’ve taken this route to market. Technology changes too quickly, and without the right support, channels will struggle and many will not survive. Nextiva’s culture is very service-oriented, and aside from my time with Tracy and Ira, that was clear from my interactions with everyone else from the company I spent time with at the show.

Product innovation is another key ingredient here, and their roadmap is very much about adding value to communication and collaboration applications. This is part of the “solutions architect” hat they want their partners to wear, so end customers can make their businesses more competitive and their employees more productive. Along those lines, their analytics engine is about to be launched, as they know that end customers need more visibility – in real time – for how communication is touching all aspects of the business. As noted, analytics will help customers “use data to change the way you do business”.

This is a much different outcome – and conversation – than what they were having when selling direct, and based on how it’s gone since then, I think Nextiva is pretty well aligned with where this market is heading.