Infonetics Research: Why SIP will Overtake Enterprise T1 Lines in 2015 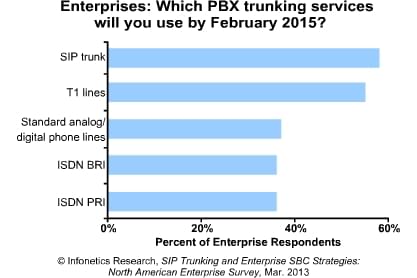 Infonetics Research, a market research firm, has released excerpts from their latest survey, SIP Trunking and SBC Strategies: North American Enterprise Survey. In this report the firm details a number of ideas including businesses intended plans for SIP trunking and eEnterprise session border controllers (eSBCs)—including expenditures, trunking providers, and deployment models. Conducted by Diane Myers, Principal Analyst for VoIP, UC, and IMS at Infonetics Research, the report surveyed 300 businesses about their plans regarding both SIP and eSBCs. In doing so, Myers stated that one thread was excessively common, “SIP trunking adoption is growing as businesses seek to improve the reliability and lower the cost of communication services.” In short, the report indicates that SIP trunking will grow from 38% o 58% in 2015, while the percentage of T1 Lines decreases from 71% to 55% in 2015.

While this may come as a surprise to some, the result of this survey are harmonious with a similar survey conducted by Webtorials and SONUS last year. In that setting, nearly 300 enterprises were again surveyed. Of that number, a large majority were moving towards SIP Trunking, while one third already had SIP Trunks in place. With this being said, the question is no longer when, but why? “The shift by enterprises to SIP trunking reflects a broader move by the entire telecom infrastructure toward IP-based networks.” In short, the industry is collectively moving toward IP networks in pursuit of better quality, reliability, and cost efficiency.

With these factors in mind, this migration seems natural. Businesses want a better service for less money, and SIP Trunking can seemingly offer just that. Also in regards to eSBCs, cost efficiency has a big impact on users’ implementation. Myers’s report again states, “For the majority of businesses using SIP trunking, the connection with the PBX is made natively (keeps costs down); while for only 31%, the connection is made via premises based enterprise SBCs.”Simply put, SIP Trunking offers businesses more than Enterprise T1 lines can; therefore, businesses are likely to flock to this solution. Additionally, AT&T Vice President of Regulatory Affairs, Hank Hultquist, states the increasing difficulties of finding equipment and staff capable of maintaining legacy systems. With that in mind, whatever staff and equipment are available are sure to inflate in price, making SIP Trunking and even more appealing solution.

Related Articles:
– What Do the VoIP Industry’s Projected Growth Rates Mean for Users?