In this head-to-head of Google Voice vs. RingCentral MVP, we’ll compare key features, pricing, hardware compatibility, and more to help you decide which tool works best for your business.

In this section, we’ll compare different features of both VoIP providers and declare a winner at the end of each subsection. 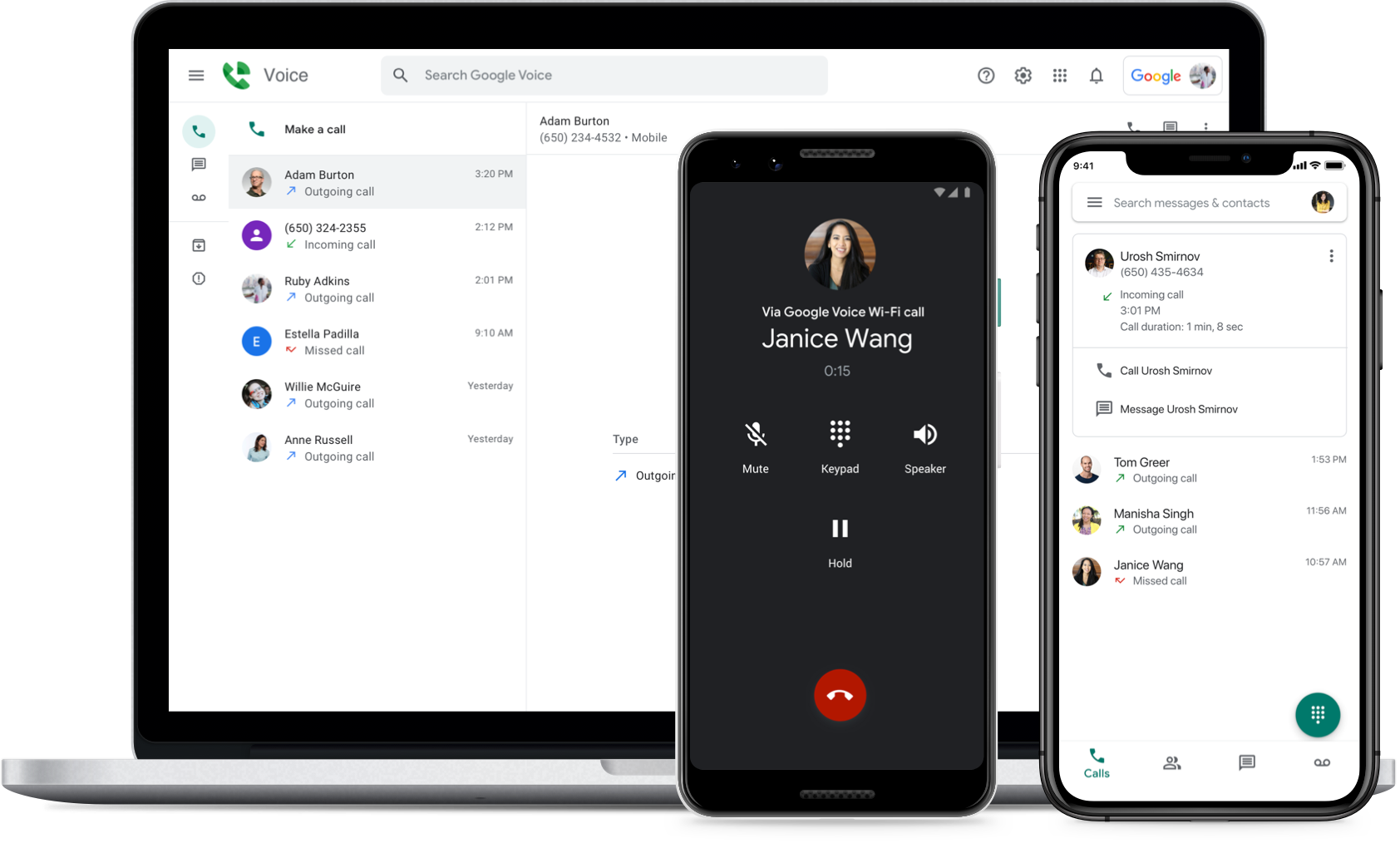 RingCentral offers a robust cloud VoIP service accessible from any location and using any Internet-connected device, including phones, tablets, compatible desk phones, and desktop/laptop computers via the softphone interface. 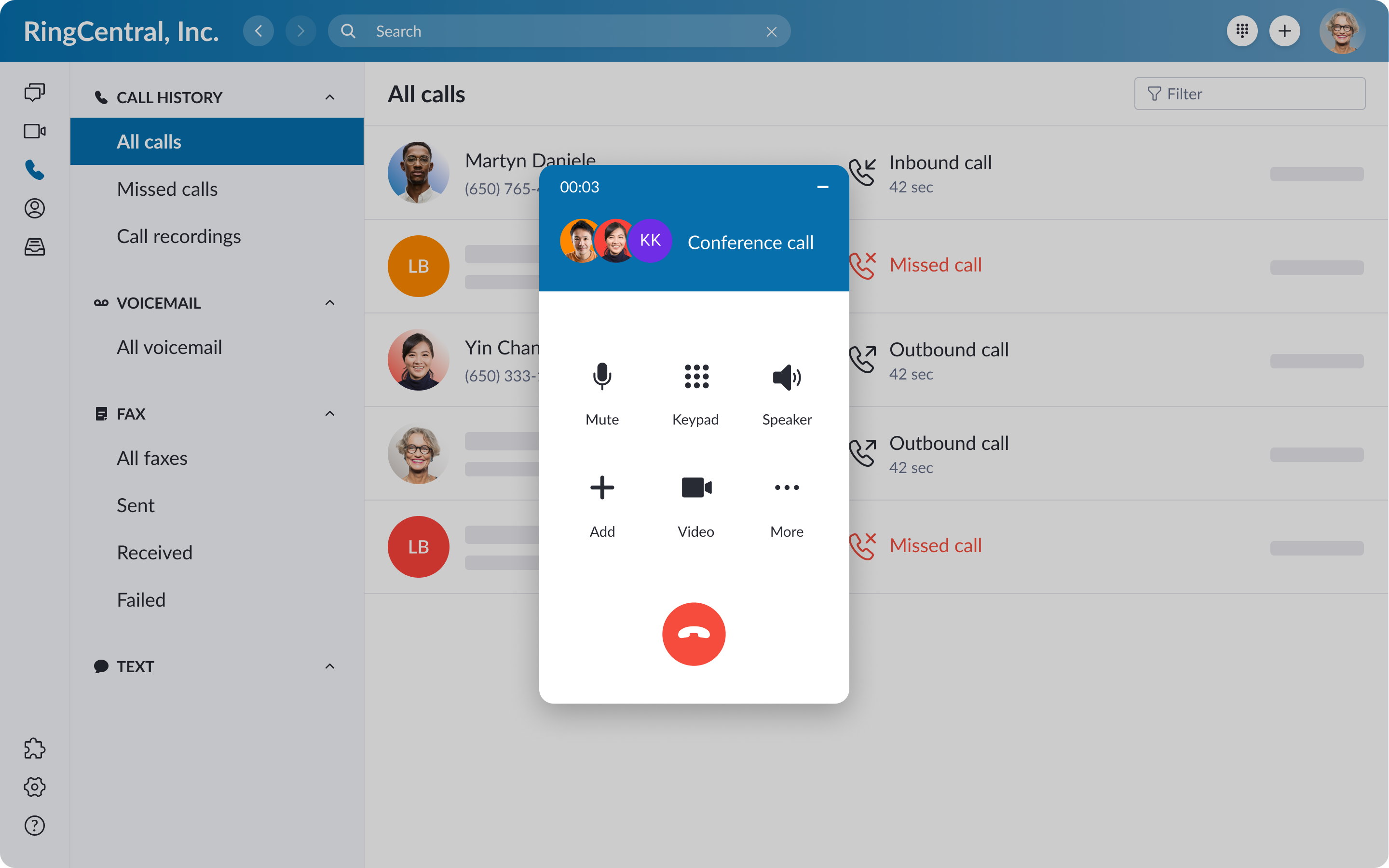 RingCentral includes a plethora of advanced phone features including:

With its many advanced features, 99.999% uptime and commitment to security, RingCentral is the winner here.

All Google Voice business users have access to Google Meet, part of the Google Workspace ecosystem.

Google Meet is a secure, enterprise-grade video conferencing solution with encryption in-transit. It is compliant with a number of industry standards, including GDPR, HIPAA, and SOC 1/2/3. It also includes anti-abuse features like meeting PINs, mute/remove participants, and more. 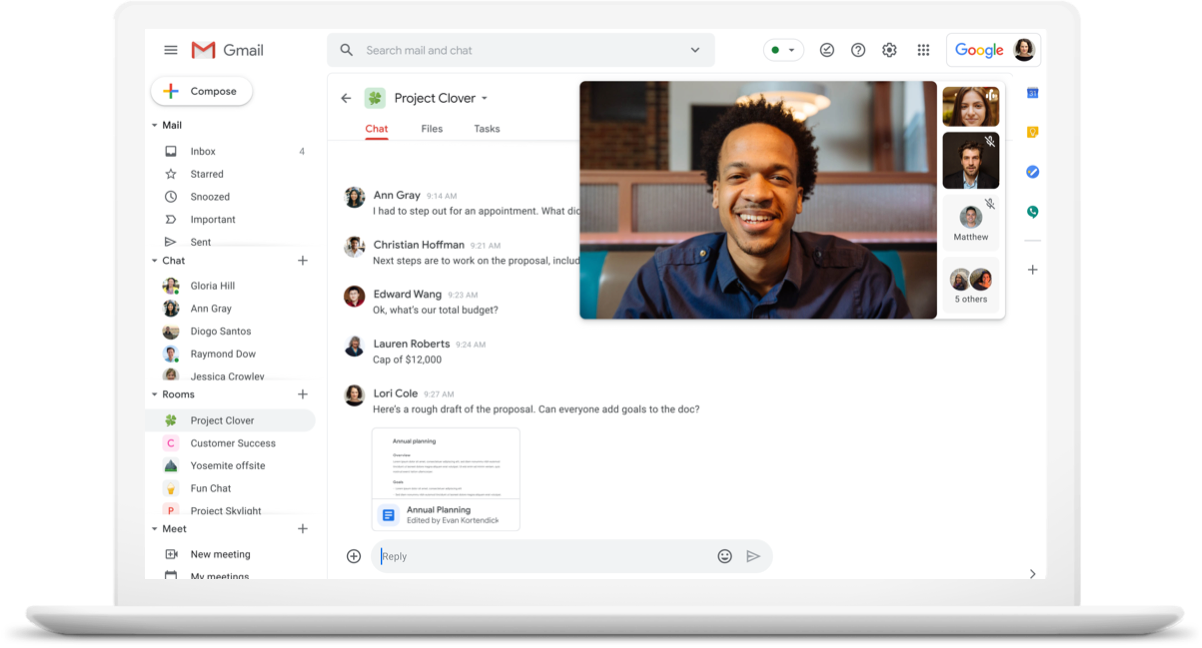 Google Meet participant limits range from 100 to 500 depending on which Google Workspace plan is purchased.

Users can host an unlimited number of monthly meetings with a duration of up to 24 hours each. Meeting attendees can join a video conference via a one-click shareable link, using dial-in access, via meeting invitation, or directly within Google Calendar. Admins can easily schedule repeat meetings, send out automatic join links, and set meeting reminders within Google Calendar or Google Meet.

Other Google Meet video features include:

RingCentral’s video platform enables users to host secure, professional meetings that participants can join from any device with or without the RingCentral app. 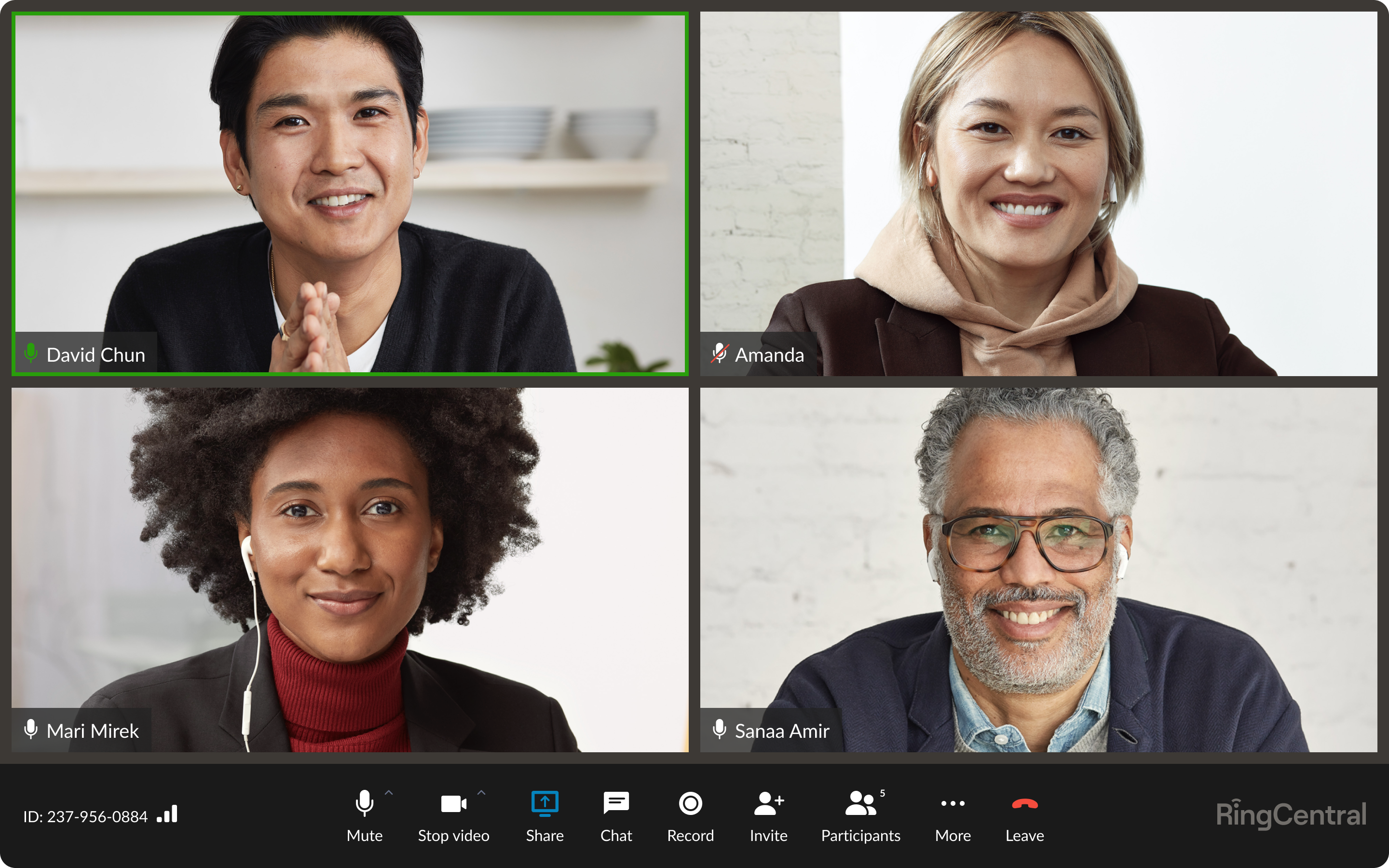 RingCentral meetings include many advanced features, including several AI-powered tools such as live transcription, noise reduction, and meeting insights. It comes at a cost, however, as RingCentral only includes video conferencing for Standard plan users and above. Participants are capped at 100 in the Standard plan and at 200 in the Premium and Ultimate plans. A license for additional participants can be purchased as an add-on.

Some other RingCentral video features to note include:

With dynamic end-to-end encryption and access to more advanced features, RingCentral’s video platform is superior to Google’s in many ways, however, video is not included in all RingCentral plans like it is with Google Voice. That, along with RingCentral’s higher price point and lower participant limit even things out. Google Meet is a solid video platform and an excellent choice for smaller teams that don’t need all of the bells and whistles.

Google Voice Standard and Premier plan users can set up an unlimited number of auto attendants (Google’s auto attendant feature is also known as IVR.)  Users simply sign on to the Google Admin console and design a customized call flow using an intuitive interface. Welcome messages can be added by using text-to-speech (with options for language, voice type and speed) or by adding a pre-recorded welcome message. Users then add custom menu prompts and corresponding call flow actions like call routing, playing a special message that callers can’t skip, disconnecting, or forwarding to voicemail. 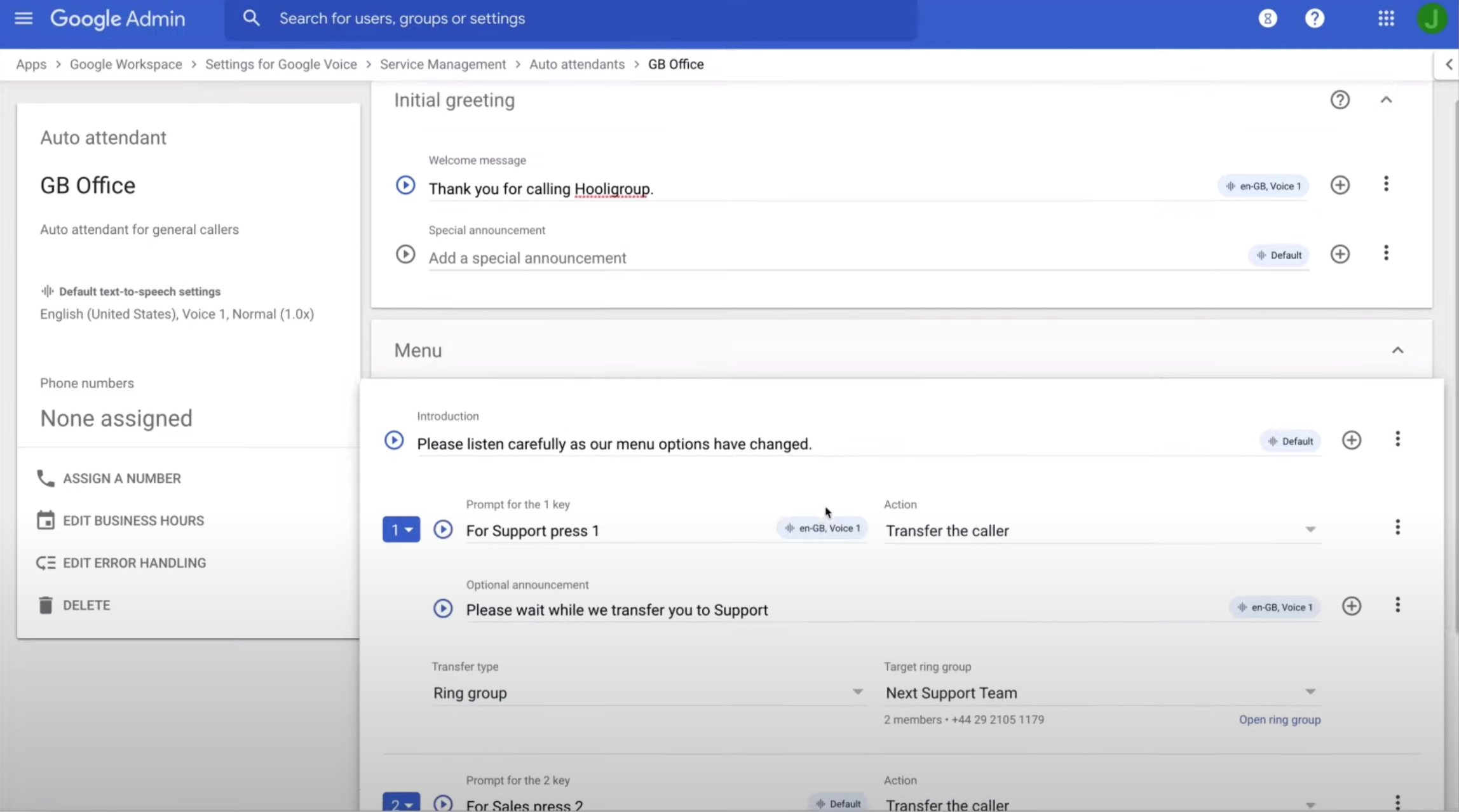 RingCentral’s multi-level auto attendant works similarly to Google’s, but with a few more options.  Users can attach a dial-by-name directory to the IVR tree, transfer to an outside line, and a visual IVR editor with a graphical interface. RingCentral users can create up to 250 auto-attendant/IVR menus including submenus. Note that multi-level auto attendant is only available to Standard Plan users and higher. 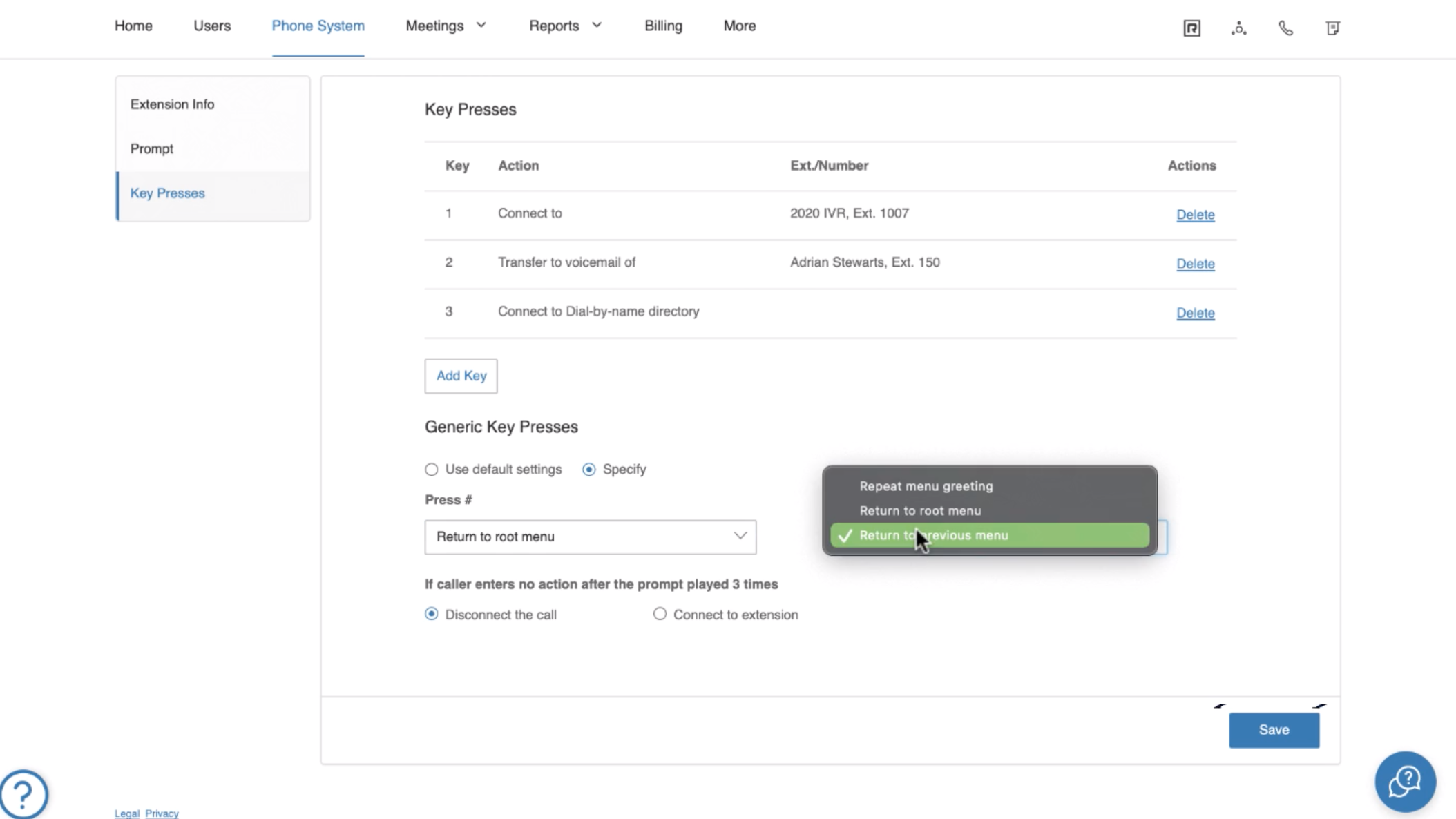 This category is also a draw because although RingCentral offers a slightly more advanced auto attendant, it costs more than Google Voice and limits the number of auto attendants.

Google Voice users with non-premier plans can access voice logs and other activity logs across Google Workspace and conduct searches with multiple filters.

RingCentral includes real-time analytics in its Premier and Ultimate plans. Ultimate plan users also have access to device status reports and alerts. Call log reports, including date, time and duration of calls are included in all RingCentral plans. 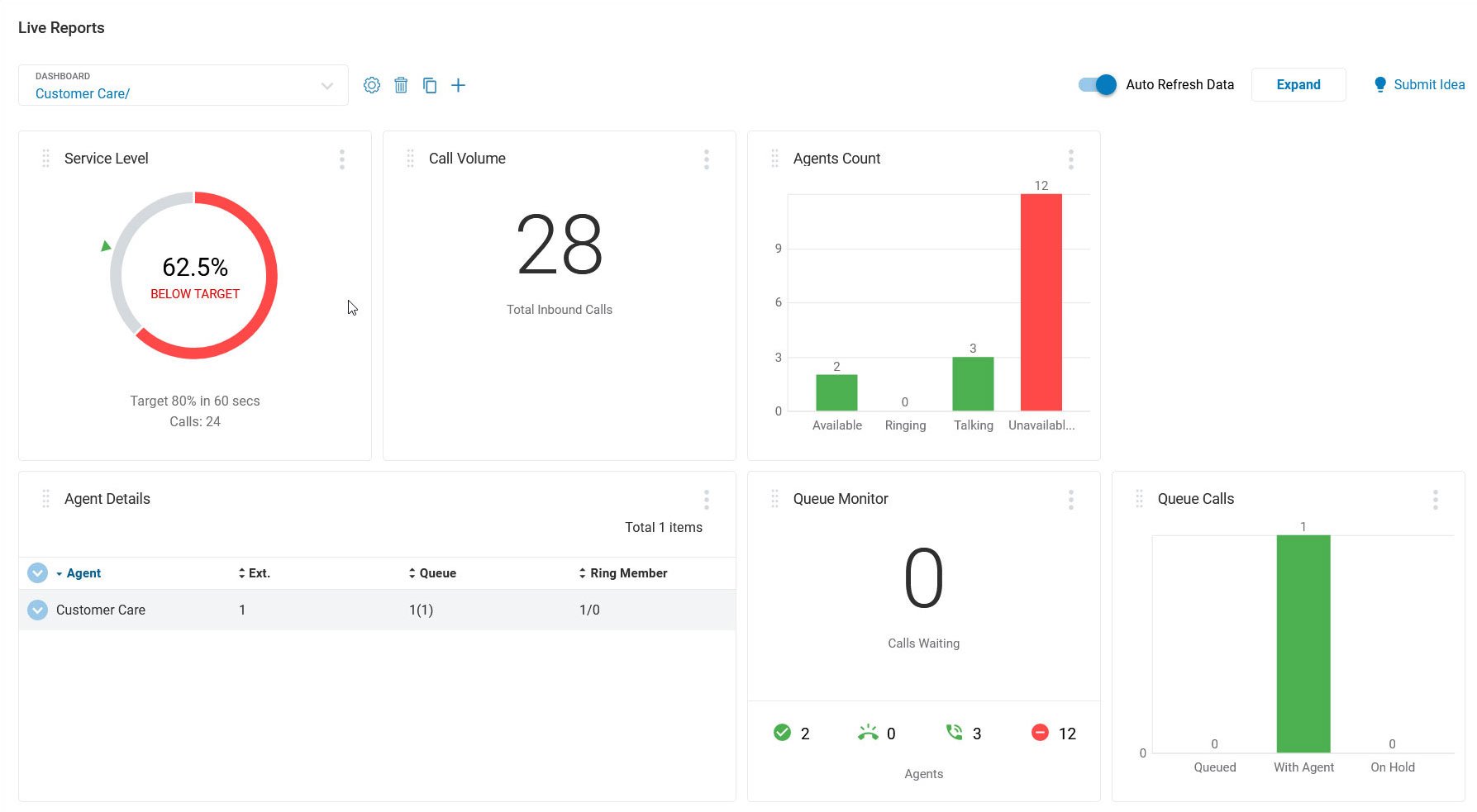 RingCentral’s real-time analytics enables users to generate customized dashboards and reports with over 30 metrics to choose from including talk time, after hours time and call volume. Multiple analytics dashboards can be created, shared and collaborated on. Aggregated data is available for 24 hours.

With real-time analytics, custom dashboards and alerts, RingCentral is the winner here.

On the other end of the spectrum, RingCentral has one of the most robust integration ecosystems in the UCaaS space. RingCentral integrates with over 200 third-party apps including Salesforce, Hubspot, Microsoft Teams, Slack, Zendesk and many others.

RingCentral is the clear winner here.

Google Voice is meant to be used with internet-enabled devices such as smartphones, laptops and softphones. When it comes to desktop phones, Google Voice has limited compatibility and only lists the following Poly models as options:

Google Voice is, without a doubt, the economical option as can be seen in the following section. Google Voice does have limitations, however, mainly when it comes to advanced features, integrations, and hardware. Read on to compare pricing options for RingCentral and Google Voice.

RingCentral’s pricing structure is more complex with four tiers, volume and annual discounts and optional add-ons. Here is an overview:

Here is a look at the pros and cons of RingCentral:

Here is a look at the pros and cons of Google Voice:

Google Voice vs RingCentral: Which Should You Choose?

Google Voice and RingCentral are both extremely reliable unified communications platforms but they serve different purposes. For small teams and business owners that are already comfortable using Google apps such as Sheets and Drive, Google Voice is a low-cost solution that can take communication to the next level. Remote and international teams especially will benefit greatly from tools such as Google Meet.

For large businesses, enterprises and call centers that need analytics, advanced call handling options and a CRM integration, RingCentral is an excellent choice. Although RingCentral comes with a higher price tag, it has consistently proven itself to be a leader in the UC space thanks to its highly secure, user-friendly and reliable platform packed with innovative features.

Google Voice starts at $10 per user, per month.

Yes, Google Voice allows users to pick their own number from any area code.

No RingCentral does not have a free plan but they do offer a 14 day free trial.

RingCentral plans range from $19.99 per user/mo to $59.99 per user/mo depending on which plan you select, how many users you have and whether you are paying monthly or annually.