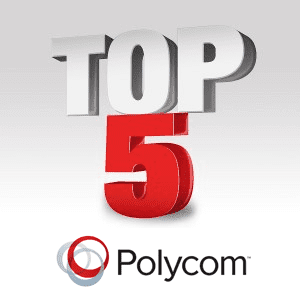 Another year in the books for the world at large – it’s astonishing how quickly time passes. Once December hits, individuals and organizations alike naturally look at the past months back to January, and think about their particular achievements. Gaining plenty of ground, having an abundance of highlights to boast about, and lighting the way for the industry into 2013, is Polycom. They have truly been in a league of their own over the past year, making good on their title as the “global leader in open standards-based unified communications”. We compiled the top 5 events that defined the video conferencing giant over the course of the past year – they are in no particular ranking order:

1) Live Demo of Polycom Realpresence CloudAXIS Suite: Polycom’s live demonstration of CloudAXIS suite was delivered in front of a generally quiet crowd, though you could almost audibly hear the “oohs” and “ahs” those in attendance were surely trying to subdue. The expectation of meeting face-to-face has been hindered in the past by the incompatibilities of proprietary video conferencing solutions. Polycom has enabled universal access to enterprise-grade video collaboration, with a touch of ingenuity that makes it all-inclusive, security. The drag and drop system it employs, is also a stroke of genius, with global directories including Skype, Facebook, Google Talk, with more video platforms to follow. Although the industry is abuzz and would like to utilize it immediately, they’ll have to wait until the first quarter of 2013. The full release will likely be towards the end of March, with a beta announcement to occur early in the new year.

2) Forbes Interviews Polycom CEO, Andrew Miller: Not all CEOs are as diplomatic, social, and well-spoken as Andy Miller. It’s double value for any corporation to have a leader who’s able to stand in front of the media and the masses, then proceed to deliver the desired effect and information to a tee. Acting as President & CEO of Polycom since May 2010, Mr. Miller has gained an incredible sense of direction and awareness as to where Polycom has been, and where it’s going – it’s incredibly obvious. When he states he’s excited about something coming out from Polycom, there’s an undeniable sincerity and genuine air to it – transcending more than a subliminal marketing tactic. An appearance in Forbes is certainly the marker of him hitting the company as a whole hitting a business pinnacle. His discussion included anything from real-world applications of Polycom’s RealPresence Solutions to advice he’d share to a fellow CEO on how to transition into the next wave of computing. In the case of the former, there’s so much to be said in how Polycom’s telemedicine solutions are enriching the quality of lives, not to mention saving them.  Interviewer Maribel Lopez really prepared some quality questions that Andrew answered at length, in detail, and eloquently to boot. The Polycom CEO serves as an ambassador for not only Polycom, but for all of us who avidly follow this rapidly developing industry – the level of excitement he brings is inarguably infectious and informative.

3) Polycom Rings the Opening Bell at the NASDAQ: Ok, so maybe Snooki and the Real Housewives of New Jersey have taken to NYC bright and early for the same duty. On the other hand, there’s clear difference between sheer novelty and recognition of true, technological pioneers. Picture a promising sunrise in the ringing of the bell that morning, liken it to the smashing a bottle of champagne on an enterprising ship, wishing it good morrow in it’s maiden voyage. Polycom ringing the bell at the NASDAQ that day was no different – and who better to chime in the NYSE than an innovative, forward-thinking industry leader. Polycom CEO, Andy Miller did the honors with his clearly elated team, going on to deliver a rousing presentation later that morning on enabling interoperability, extending solutions, and improving quality of video collaboration.

4) The Polycom Experience: When the alarm broke the silence of my Brooklyn apartment this past Tuesday morning, I immediately sprang out of my bed to head over to One Penn Plaza for Polycom’s Event. Moving through the hustle and bustle of Penn Station, and finally arriving at Polycom’s NYC Headquarters, there was a level of excitement you could truly feel in the air. 12 different cities, and over 300 people including myself anxiously awaited their presentation, which was as electric as I expected it to be. The Polycom Experience features some big announcements, including big additions in terms of HDX 3.1, and integrations with Polycom’s HDX video systems; RealPresence Whiteboard, Content Sharing, and SmartPairing. The crew at Polycom were incredibly gracious and opened the floor for questions at the end. The bulk of the concerns had to do with CloudAXIS, which again, has many people intrigued and eager to implement it. The event was immersive and really painted a clear picture as to some of the things we’ll be seeing from Polycom in the near future. In fact, saying you’d have to see them to believe them wouldn’t be entirely true, as Polycom seems to have a way of helping visions fast approach reality. It’s better stated that seeing new developments from Polycom is an experience in itself – one that’s quite a pleasure to be part of. Take a look at UC Whiteboard in action below:

5) Polycom Introduces the Touch Screen VVX 600: Back in early October for Polycom’s opening bell ring at the NASDAQ, the VVX 600 found itself displayed on a few slides presented. Not much was said about it at that time, but towards the end of the month, Polycom started to let everyone in on their creation .Including with the phone, is the new Polycom UX software, which delivers the highest level of video collaboration. The Polycom VVX 600 represents the next generation of IP Phones – a talented follow up to the popular VVX 500. Setting forth and creating the best-of-breed for desktop phones, it will be interesting to see how other companies follow suit in the coming year. To mention a few on the long list of capabilities the phone has, is higher-quality video at lower bandwidth, content sharing, and wideband audio, and of course, a 4.3″ capacitive touch-screen. The phone is widely available and has a ton of add-on video, wireless, and customization options that are incredibly easy-to-use, much like it’s predecessor. Released in late November, it currently stands as a favorite in the VVX series – another example of Polycom repeatedly outdoing themselves, to the delight of voice over IP end users.

There are many more “Marquis Moments” for Polycom over the course of 2012, and this list could easily find it’s way to ten or more. However, I think it’s best to leave it at these and return to focusing on our own impending achievements. After all, the success of Polycom has been relatively boundless, with the entire industry seeming to hang on their every announcement and move. We’ll continue to keep up with them in 2013, as well as enjoy the solutions they conceptualize and design, that captivate (and capture) the world.