Last year video conferencing giant, Zoom, said it would invest an unspecified amount of money in DTEN, a device manufacturer and all-in-one video collaboration hardware developer. Though the company offers up a variety of solutions for numerous UCC systems. Zoom is merely where it places the majority of its focus on developing and enhancing that customer/end-user experience.

I recently sat down with Sally Tung, Head of Product, DTEN, who told me about one of the first major technologies to emerge sense the investment made by Zoom, DTEN Mate. It is, essentially a wireless controller for Zoom, allowing users to move around meeting rooms freely. According to Tung, the company’s built a first of its kind.

“You’d be surprised that so many similar products – are still wired, and we built the only wireless touchscreen Zoom appliance that supports ZRC (Zoom Rooms Controller.)”

The touchscreen device also works with any Zoom Rooms device, not only (DTEN-built) hardware. Not merely extending greater mobility, Tung further noted that: ergonomics played an essential role in developing the new hardware for Zoom.

Why Not Use an iPad or Andriod Tablet?

Designers at DTEN, I’m told, ‘specifically considered what it is like to have a controller in hand for an hour-long meeting.’ And then designed accordingly, Tung told GetVoIP News. The offering is compact and can easily fit in your hand, allowing one to perform multiple tasks while still holding the device. It is also lightweight – weighing in at less than a pound.

When it comes to what seemed like a fairly obvious question, I asked Tung: Why is it that the DTEN Mate is better than an iPad? Tung told me that the purpose-built device merely offers up a better user experience, noting:

“The device has a single purpose to seamlessly pair and work with Zoom Rooms devices. ‘iPads’ being more consumer-oriented, have lots of features that ‘IT’ need to circle back to and lockdown.” 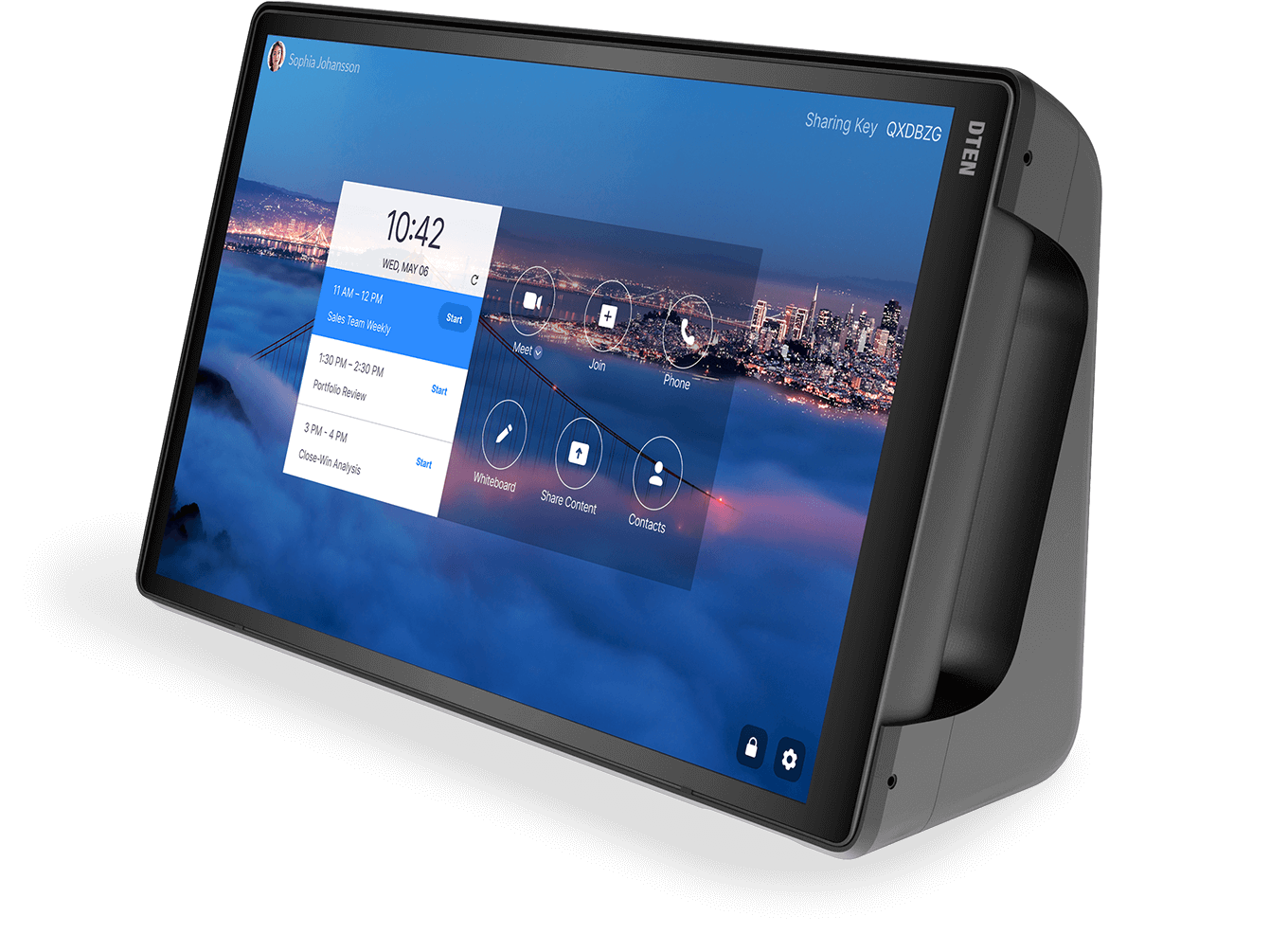 With an iPad, for instance, she told me, “users often stray from the Zoom Rooms functions.” There is also the issue of power, as users frequently forget to recharge iPads, aren’t able to find cords. All this – she notes, results in an eventual call to the IT department. DTEN Mate solves the issue of charging with the companion DTEN Mate Dock which enables contact-free charging and retails for $598.

“Being more consumer-oriented, something like an iPad has more frequent updates. And although these updates may have little to do with meeting applications specifically, IT still needs to manage, test, and ensure security.”

The meeting room management device is much more than that. DTEN Mate comes with DTEN Orbit service, which extends a warranty and remote management functionalities. As such, users can track inventory, onboard employees remotely, perform firmware updates, access diagnostic tools, along with – time and function reset. Set up is a process that requires no advanced IT knowledge.

In addition to a full suite of tools for managing meetings, DTEN Mate extends features like a dedicated UI user interface that’s PoE (Power over Ethernet) ready; and is a Zoom-certified appliance.

With a purchase of a DTEN Mate, the controller, the companion DTEN Mate Dock, and wall mounts, are included at no additional cost. Hoping to tackle another annoying workplace quandary: the DTEN Mate meeting room management device also acts as a meeting room scheduler.

“Positioned outside a meeting room, DTEN Mate doubles as a way to reserve the room or see which rooms are available using Zoom’s Workspace Reservations,” Tung shared.

When leveraged as a scheduler, Tung said that the DTEN Mate’s dock doubles at the wall mount, too.

More Features in the Works

It is one thing to release such a device and make it available for customers. It takes a forward-thinking company; to innovate and to consider the shelf-life/longevity of the technology from inception. That might be because of user requests or savvy developers who understand what customers need.

There is, according to Tung, a demand for features such as screen mirroring, which she said will be available in the future. Having this functionality will enable users to annotate documents and chart ideas directly with minimal effort and from the comfort of their seats.

“Users do not have to go up to the video conference board to annotate and can remain in full view of remote participants,” Tung said. 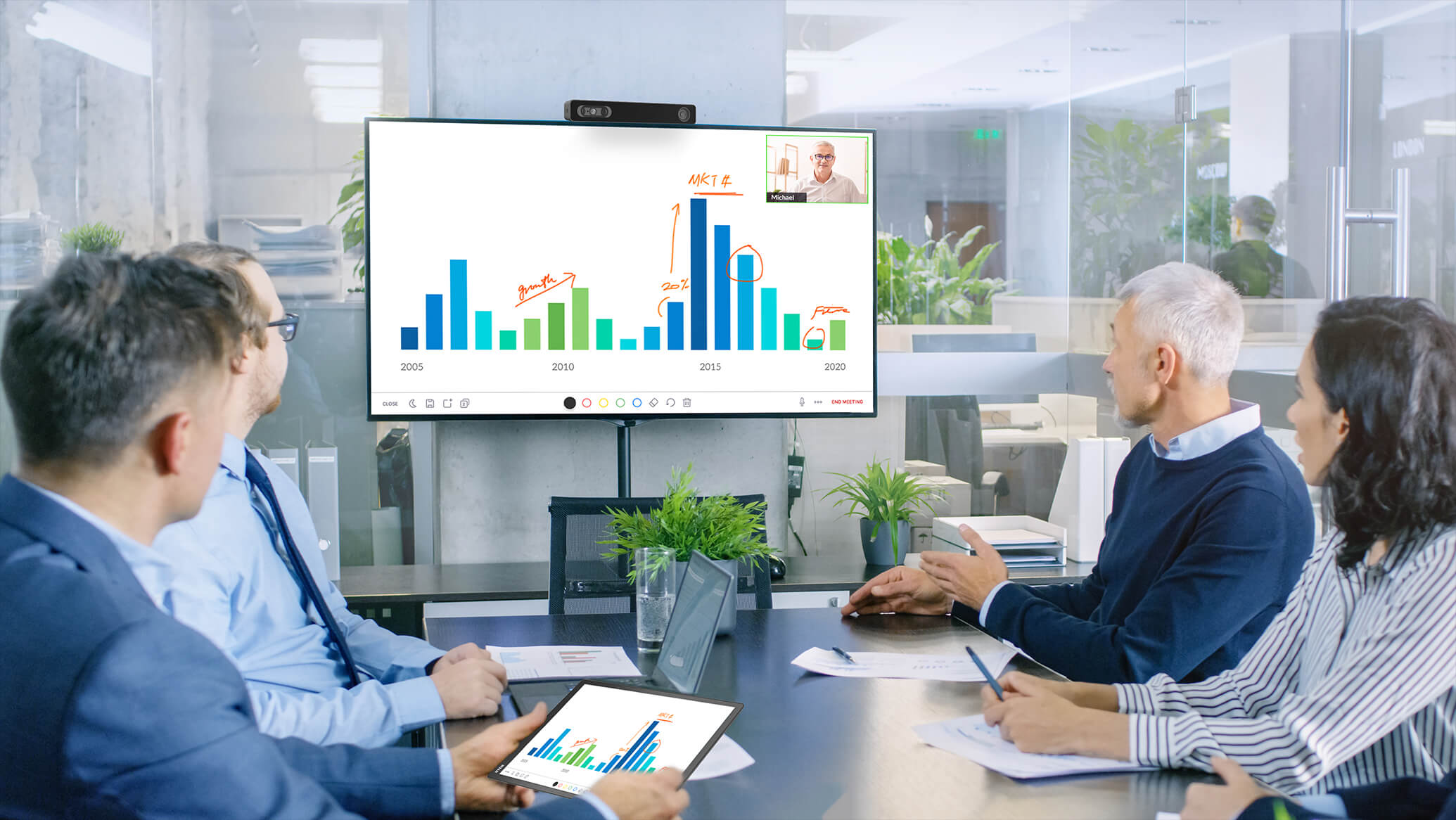 Screen mirroring is currently available via DTEN Mate when paired with DTEN GO – but will be made available for other DTEN video collaboration devices later in 2022 through firmware updates.

According to Frost and Sullivan, video conferencing solutions are slated for massive growth over the next three years. By the year 2025, forecasters there predict the market will be worth $7.71 billion. They say the push will get fueled by remote work and huddle rooms, further noting:

“As businesses and educational institutions prepare for the return to work, meeting rooms and classrooms will see heavy technology investments to support hybrid work and learning.”

Forecasters at Frost and Sullivan also say that the deployment of room-based endpoints, USB room devices, and personal video communication devices; will grow by as much as six times or by 12.5 million units. That notion reflects in the number of video conferencing companies that seem to release a fleet of new features nearly every week to keep ahead of the curve.

BlueJeans by Verizon, Poly, Zoom, Avaya, GoTo, Lifesize, 8×8, Vonage, Intrado, Starleaf, Cisco, Microsoft, and PGi, have done as much since the onset of the Coronavirus Pandemic, along with countless others scrambling to meet growing customer demands.

As for which company takes the lead in the video conferencing market, the numbers are plain: but as a caveat, I should say that 62% of companies use three or more video calling platforms. With this in mind, Zoom claims to have had over 300 million meeting participants per day in 2020. Google Meet had over 100 million daily meeting participants in 2020.

Microsoft Teams had 250 million active daily users in 2021, and Webex says it has over 324 million users. As you can see, there is no consistency regarding how the numbers get reported; or if they (are even) reported.