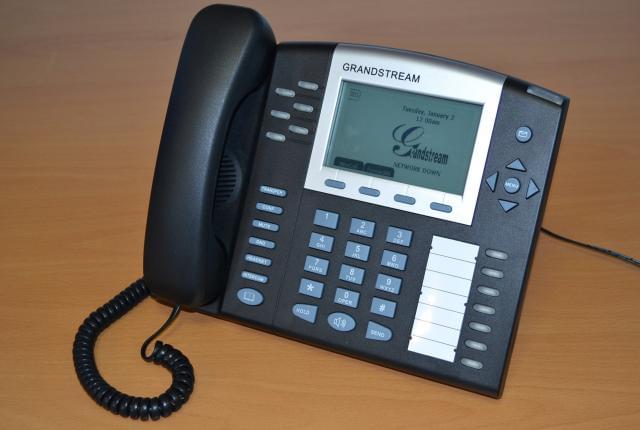 Soft keys and menus were confusing. Sound is average.Hypercritical: The buttons felt stiff.

There are many quality used VoIP phones for under $100. Unless you need six lines, this isn’t one of them.

In the box you get:

The Grandstream GXP 2020 has been discontinued, which means this review is still valid for used or refurbished models. So, is it worth it?

A quick search on eBay shows this phone is available for around $80 to $100. That puts it firmly in the range of the Cisco SPA303. The Cisco 303 has three lines, compared to the Grandstream’s six lines.

In setting up the phone to be tested, it played a dial tone, even though it clearly said on the front “network down.” The dial tone was just an MP3 playing so there wouldn’t be silence. As I’ve written about before, a dial tone is really an artifact of a bygone age, and I think they are unnecessary for VoIP phones. In this case, I was lulled into a false sense of security. The whole point of a dial tone is to show that the phone is working, so if the dial tone plays when the phone isn’t working…there’s no point.

The 2020 had four soft keys. I didn’t feel like there were too few keys, which was good, but it seemed like it was hewing too closely to the functions of PSTN multi-line phones. For example, I couldn’t even get a call log or a redial. I could, if I hit the “new call” soft key, get the second soft key to read “redial,” which, as is all too often a complaint of mine, only gets the last number dialed, not a call log. The GXP2020 had a number of hard keys: Transfer, conference, mute, DND, Headset, intercom, and phone book.

I could get a call log by pressing the menu button twice, as the first option for this phone was call history. But although there were up, down, left, and right keys, there was a menu key in the middle, but I didn’t see an “OK” hard or soft key, which made it seem like some options were “dead ends.” I could press the left hard key to go back, and that functioned as a cancel button. The down key also went right to the phone book, which was nice. But not having a “home” key was frustrating.

It was easy to add recent calls to the phone book. You had to cycle through the letters through the keys, which was normal, but it was annoying that it wasn’t smart enough to know that the second letter wouldn’t need to be in all caps. I didn’t like having the middle button be the “OK” button when it was labeled “menu.” I’d rather it not have a label at all.

The sound quality was average. I’d say it was below the other phones I’ve tested. It was good enough to make calls, but when I listened to music, I could clearly hear that the sound was tinny and sounded muddy compared to newer phones.

Conclusion: This is far from a bad phone. But, it’s been surpassed by newer and better phones, and unless you need to juggle six lines, you’re better off with a newer phone in the same price range.