Zoomtopia 2021 brought us a lot of industry news, much from Zoom, but a sizable amount from its partners, too. Poly is no exception, as one of Zoom’s most recent collaborators on a new intelligent Zoom-certified camera and the Poly Studio X70 video bar – an offering set to receive certification by December 2021.

I will note that – at previous iterations of Zoomtopia, Poly launched devices in conjunction with Zoom, so the partnership is not a new one. It is somewhat of an updating of vows, as earlier devices focused more on huddle spaces/rooms. Poly’s X30 and X50 even included built-in microphones and cameras.

Once the pandemic hit Joe Santucci, Senior Product Marketing Manager, Poly told me that the UCC endpoint developer reshuffled its product roadmap and rolled out Studio P Series, a series of personal video devices with the P5 webcam. Poly also launched the Poly P21, a monitor with lights, cameras, mics, and speakers, along with the Poly P15, a (personal) video bar with a camera, with a mic stand and speaker.

“We did this because everyone suddenly went from being in the office every day to working from home.”

Now, nearly two years later, the tables have turned – employees are heading back to the office, and Poly announced the launch of the E70, a USB camera. It provides a similar experience to the Studio X70 (if you take out the camera); it has the same video experience in video camera format – not in the video bar format of the X70.

But what about hybrid meetings? How does one provide the same kind of experience and continuity expected from customers today? Santucci said the answer lies in using artificial intelligence to create a highly-produced meeting experience that makes remote employees want to be a part of meetings.

Tracking speakers in the early stages of the technology was not such a great experience. Most, including Santucci, agree with the notion. It was an all-too-awkward and rather tight shot on a big screen, and it was not a comfortable experience.

Today – people do not feel like they are seen if the group gets framed. And remote workers? They almost always feel excluded during hybrid meetings. How do you deliver an experience where people want to come into the office and leverage hybrid meeting tools if the experience is subpar?

Might a more highly-produced video experience be in order? Santucci would answer that question with a big fat “YES.” And so would Poly; its latest devices X70 and Studio the (E70) have dual cameras with 4K sensors, NoiseBlockAI, and acoustic fence technology to block out unwanted background noise.

The coolest part, Poly director AI gives users an enhanced video experience – not just looking to frame the whole group of employees in a room. It can frame individual speakers, speaker one, or another speaker close speaker one, for instance. If it detects two people speaking nearby, it can do a gentle pan to frame both individuals in the shot. It will note if someone across the room starts talking and pan over to them for a seamless transition, too.

“You have to make people feel seen with speaker tracking by providing a higher level of production to bridge the gap between remote and in-office workers.”

Both offerings will gain support for Zoom Rooms Smart Gallery to “bring meeting equality for medium and large rooms.” Poly plans to also soon include native support and connectivity for cloud-based video providers of choice.

Poly is on the bleeding edge of implementing its technology in a myriad of new environments. From that, it is clear that its developers there will stop at nothing to enhance the UX (user experience) of its hardware. 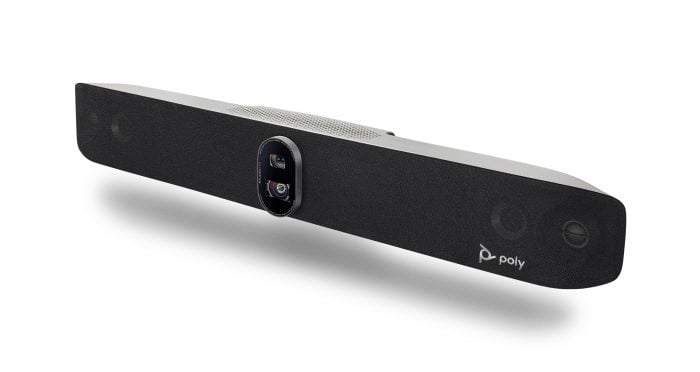 Users who leverage the new hardware will gain the ability to control lights, monitors, and shades directly from the Poly TC8 screen via Poly’s partnership and integration with Extron. Motorized and integrated electronic privacy shutters for security are also a part of the deal.

One of the most practical capabilities of Poly’s new hardware is an air quality sensor that provides additional meeting room analytics through Poly Lens, to be made available in March 2022. Twenty-four-seven technical support, advance hardware replacement with pre-paid next-day shipping, and exclusive professional services discounts aren’t so bad either.

As easy as this may all sound, Santucci was sure to note it takes time to refine the process. He told me that Poly’s AI technology for video production constantly changes. They also take the art of directing a meeting quite seriously.

Live meetings, he shared, are much more of a test, especially in a collaboration setting, presenting unforeseen challenges in some cases. After lots of feedback from beta customers regarding what might seem like bells and whistles, he said that Poly learned a lot, namely:

Available in a few different modes, group framing sets the context of the room while speaker tracking offers a more dynamic view of a speaker, following them. Presenter Mode, which Santucci called “much more dynamic,” proved invaluable to its education customers throughout the pandemic.

During live classes, educators are used to going over to the whiteboard, not staying stationary or tethered to a desk. Place Poly’s new video device in the front row of a meeting or class, and it can track the presenter or educator as they walk and speak naturally.

“By placing the device in the front row, it better captures the attention of students, remote workers, etc.”

Not to worry, there’s more innovation to come from Poly in the AI space, as each software update includes some kind of enhancement to its Director AI technology.