Slack Finds Disconnect Between Execs & Employees on Returning to Office

New research of 10,000+ global workers in the U.S., Australia, France, Germany, Japan, and the U.K., shows that an increasing number of employees will leave their job if they do not have the flexibility they want at work.

The survey, commissioned by Slack’s research consortium, Future Forum, also found that many more employers than workers want to return to offices. Further findings suggest that of those currently working remotely, executives are nearly three times more likely to want to return to the office full-time than non-executive employees, painting a picture of a divide in the workplace. 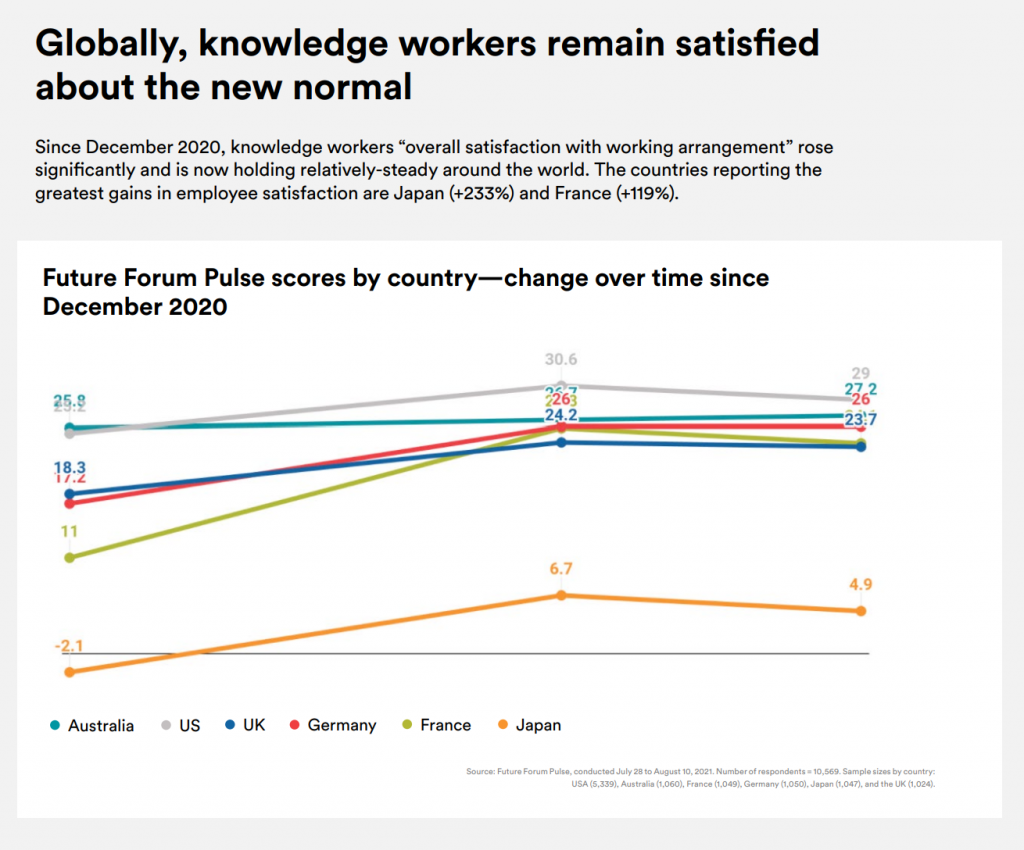 Diving into the Results of the Study

A stunning 57% of global knowledge workers said they are open to looking for a new job in the next year, meaning companies run the risk of losing top talent to competitors. Even if they pay less, some employees may very well; take the pay cut in exchange for greater flexibility. It is not unheard of, nor is employee engagement something employers should dismiss as “not gonna happen.”

Overall, the vast majority, nearly eighty percent of employees, are not willing to entertain the idea of full-time office work.

According to Slack, this dramatic divide between executive and employee preferences should be alarming. What Slack found next raises another point of contention. Through its research, Slack found that most executives, meaning (66%) of which say they will design their “post-pandemic” workforce policies with little to no firsthand input from employees.

What is Fueling the Great Divide?

The contrast in the divide between executives and employees is especially apparent among those currently working remotely full-time.

“Nearly half of all executives in this group (44%) want to work from the office every day, compared with 17% of employees (2.6x difference),” Slack wrote in a statement.

Furthermore, 75% of executives (now) working remotely full time said they want to work from the office three to five days a week, versus only 34% of employees. During the last quarter, expressly as many companies told employees they had to come back to the office, the overall satisfaction among executives with their working environment rose three percent. Employee satisfaction dropped five percent during the same quarter.

There is also a transparency issue. While two-thirds of executives (66%) say they are “very transparent” about their post-pandemic work policies, less than half of employees (42%) would agree. In a similar vein, 81% of executives say executive leadership is “transparent about sharing developments that impact the company. A mere 58% of employees said they “agree.”

Employees of color, women and working parents noted that flexible work would remain important to them. And Black employees, in particular, said they feel like they belong within a company more since starting to work remotely.

“While data show; that flexible work arrangements improve the employee experience across the board, the positive, cumulative effects of remote and hybrid work are especially evident for Black knowledge workers, whose employee experience scores have risen steadily over the past year.”

This quarter, Black men made the most sizable gains in employee experience, according to Slack – compare this to every demographic group in the U.S., which Slack noted the “significant upswing in the percentage of Black respondents who agreed with the following statements in August 2021, compared with August 2020, is striking:” 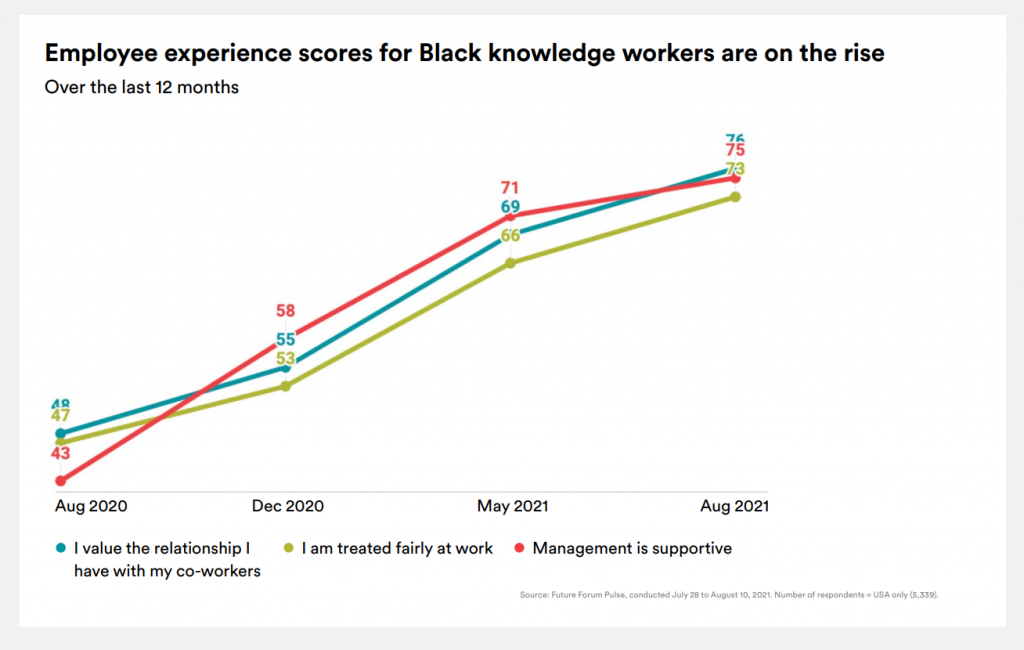 Employers Have to Play Catch Up, and Fast

If employers fail to act on some of the key findings of Slack’s recent study they could very well be in store for a series of rude awakenings. It is clear that employees of all races, backgrounds, and sexes crave greater workplace flexibility and are willing to quit their current job in search of that.

We have seen a sharp rise in the number of employees quitting their job across the U.S., and this month’s job report was reflective of that. We seem to have opened Pandora’s Box but in the best way possible by introducing the idea of remote work on a mass scale.

Employees are happier with the balance they have found and with the fact that they no longer have an unnecessary and rather stress-inducing commute to the office. Employees who don’t feel enslaved to their work, and are happier employees, too.

Take a look at some further findings from Slack’s survey that suggest that and a whole lof other benefits to employees: 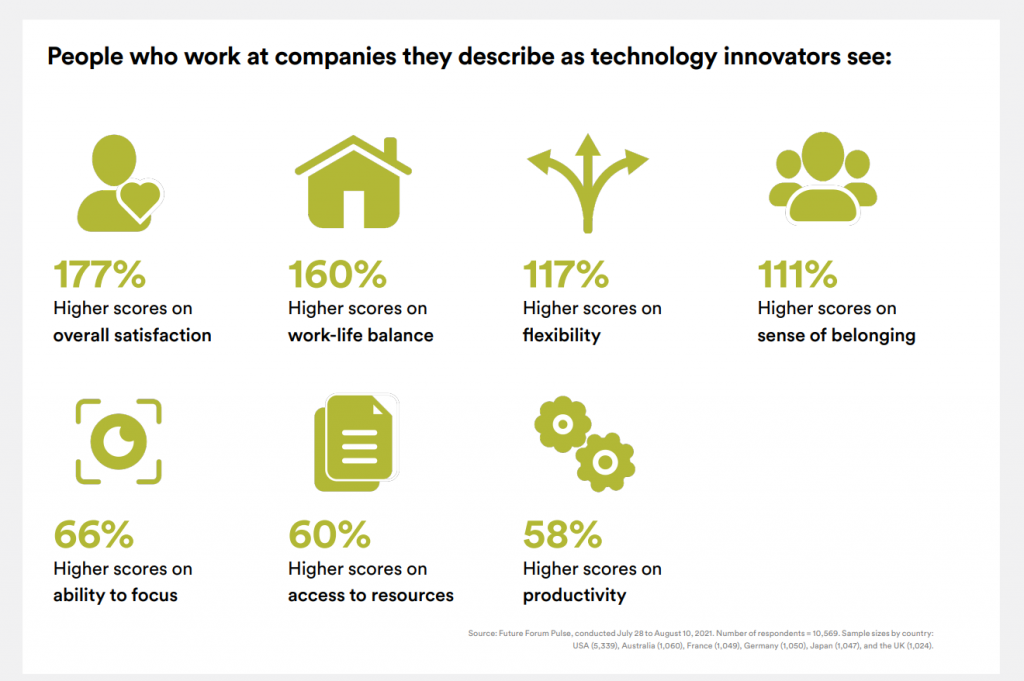 One can only hope that old-school trains of thought are replaced by more forward-thinking ones, the kind that place value on employee satisfaction over choosing higher profit margins. Employees have to be well enough to execute the level of work you give them, so why force them into a space where their creativity gets stifled?

One can only guess as to what the future of work and employee churn looks like, but something tells me that employees do have the upper hand in the matter and employers will have to incentivize them as a result, hopefully with flexible working options, like a hybrid or full-time remote work schedule.