This round marks the fourth time the former legacy player (now one of the most sizable cloud players) has gotten noticed by Aragon Research for its enterprise-grade UCC technology.

According to a statement by the company, Avaya is one of the only vendors in the industry that delivers to end-users what it calls a ‘total experience.” I’ll let Avaya elaborate: “Avaya offers a total experience, the intersection of customer, employee, user, and multi-experience – with expertise across the entire landscape.

Such differentiation in a market saturated with no shortage of offerings is warranted. Although Avaya has long been a pioneer of unified communications and collaboration – Avaya Spaces, is unlike anything the company ever did in the past. More on that, below.

It is critical to mention that this is an independent report that does not endorse any single vendor. It is an attempt to shine a light on “good” and innovative solutions to real-world enterprise issues. Aragon Research had some solid points to note about Avaya Spaces; nonetheless, mentioning that the software solution is both integrated and intelligent.

Avaya Spaces, therefore, enables what the research firm calls “people-centric” collaboration. In a new normal comprised of hybrid work, hybrid work seems to have a double meaning. Today, humans and bots interact more than ever before in history – another kind of ‘hybrid work’ experience.

Scheduling tasks, starting/stopping recordings, setting reminders, changing appointments – in 2022, almost any task can get done faster with the assistance of bots or virtual assistants. These are the kinds of experiences built into many of the UCC platforms that exist on the present-day market.

Check out this case study from global UCC leader, AudioCodes:

The author of the research report, Jim Lundy, and Aragon Research Lead Analyst commented, oddly enough – team collaboration is not just about people. It is about chatbots, which increasingly get referred to as virtual agents, powered by conversational AI platforms.

Virtual agents are all about helping people via services such as answering questions or helping get the information to perform a task.”Aragon Research anticipates that by the end of 2025, sixty percent of common workplace questions will get answered by a virtual agent (immediately).

Lundy notes that this could very well nix the hunt for answers to FAQs. Adding artificial intelligence or bots into these kinds of experiences could even boost productivity by 70 percent for some firms, the report further stated.

Avaya undoubtedly reached leader status again, thanks to a few elements. For starters, (there is) the UCC giant’s recent integrations with Google, Microsoft Teams/Office, and Salesforce/Slack. Avaya also focused on realizing single-solution via Media Processing Core (MPC) during this period – a process that can lower bandwidth by 80 percent – ultimately reducing operational costs and increasing speed.

In this alone, one might find a ton of customer value. The final element, artificial intelligence, is littered (although quite practically) throughout the Spaces platform. It is essentially there to enhance larger and more interactive meetings, as Avaya notes.

“Avaya infused with AI in conjunction with NVIDIA; now extends AI noise removal and virtual video green screens to power all sorts of virtual collaboration experiences in an enterprise setting.”

Of course, this is an experience built on robust underlying CPaaS technology, which can make all the difference in most cases. CPaaS is scalable and lets organizations build almost any communications experience in a short period.

Avaya notes that it recently added integration with on-premises telephony, allowing those organizations to leverage CPaaS functionality, too. “This combined with meetings and team collaboration from the cloud within the Avaya Spaces browser interface, everything is now in one convenient place for the user,” Avaya wrote in a statement.

Google Workspace, Arago Research, also notes is simple to use, and its mobile capabilities are among some of the most robust. With tons of integrations and Google-grade security (along with) chatbot support/integration with G Suite – Google Workspace is a (mostly) free offering that further extends value to any size business.

Another (Aragon Research)-branded ‘Leader” is Unify. The Munich, Germany-based UCC firm is known for its enterprise and carrier-grade scalability and integration with OpenScape and other mission-critical applications. Further, Aragon states – Unify has (‘large’ enterprise experience) and ‘noteworthy’ voice and telephony integrations. 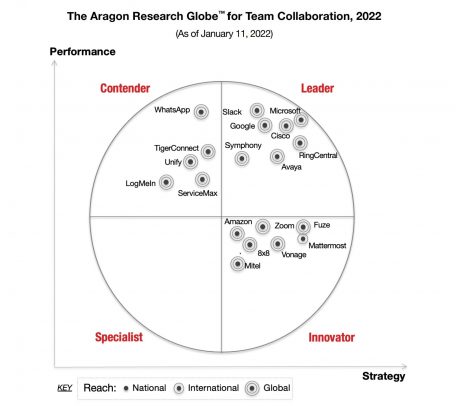 As for the innovators, Amazon Chime has the full range of UCC features, works with Alexa for Business, extends chatbot support, and its pricing model is straightforward. Aragon notes, however, that the platform has one weakness – its overall focus on team collaboration – lackluster.

Mattermost extends self-managed cloud and on-premises deployment, ease of use, advanced security options, video; and call support, third-party integrations, and threaded discussions. There seems to be just one issue. Many of you may have asked yourself: What is Mattermost?

Mattermost, an open-source, self-hostable online chat service with file sharing, search, and integrations – arrived around 2015. It extends internal chat for organizations of all sizes. Perhaps a part of its (lack of) notoriety stems from the fact that the company markets itself as an open-source alternative to Slack and Microsoft Teams.

It does, however, seem that most folks are already on one or both of these popular platforms. Aragon Research notes that overall market awareness of an otherwise ‘fit’ offering is low. You can download the full report for free by following this link.