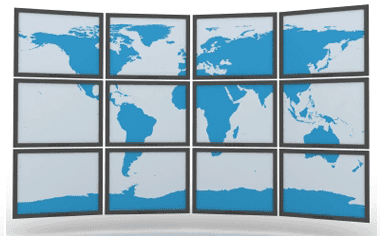 Video conferencing tools have become a key and integral part of the business IT world – not limited only to social applications any longer.  A little over a year ago, Microsoft paid $8.5 million for Skype, a large implication that real-time video and voice communications had become more than a playful way to stay in touch with friends and family.The rise in the technology could have also been attributed to Apple, whose Facetime services on iPhone devices mainstreamed the idea of VoIP into a widely used platform. The world at large has slowly began to realize the benefits (and enjoyment) of face-to-face calls, making video conferencing a more accepted means of conversation.

However, at the end of the time, Facetime is not a proper business-grade tool, as it inevitably lacks necessary codecs and is essentially devoid of quality of service guarantees. Skype also suffers from inconsistencies that make it virtually impossible to depend on for business VoIP communications. To boot, the two platforms exist and operate within their own sort of space, and lack the interoperability that is vital to video conferencing on a corporate level. This is something that dedicated vendors in the video conferencing realm are working to address, so that many services will be able to inter-operate without issue. The end goal is to help many more companies to adopt the technology. In a rapidly changing business world, many businesses have began to take advantage of visual communications technology, realizing that video conferencing and telepresence are the most cost effective way to communication and collaborate globally.

“VoIP use is definitely being embedded in a lot of organizations now. Use of SIP has made things a lot easier, and the use of Quality of Service and better codecs has made quality much better,” Quocirca analyst Clive Longbottom noted. “Hosted systems are getting a lot better to use as well –multi-conferencing capabilities, integration into applications, ease of management and reporting are all pretty good from many players now.”

Ian Foddering, is Cisco’s chief technology officer for their UK division. and had much involvement in Cisco’s networking implementation during the recent Summer Olympic Games in London. Mr. Foddering chimed in regarding the movement, noting there are still many hurdles that have yet to be overcome, while others such as security, reliability, and redundancy have been well taken care of. Bumps in the road up ahead involve changing the “culture within organizations”, as stated by Foddering. On the other hand, a significant aid in helping organizations who are considering using video conferencing, is those who witnessed the great success over the course of the Olympics with services like Webex and other conferencing tools. The initiative was taken by many companies to adopt the technology, delightfully finding they could avoid congesting travel networks by engaging in this means of communication. Foddering added, “We’re hoping that in the afterglow of the Olympics, this will help businesses begin to really embrace the use and benefits of video”.

Looking forward, the video conferencing space is wide and has already found practical in addition to environmental benefits. Cisco’s own use of video conferencing estimates a personal saving of $1.18 billion on travel costs and approximately $443 million in productivity gains from the time saved, plus 638,000 tons in carbon emissions. Rival Polycom, has also exhibited help via telecommunication outside their offices, aiding in Edinburgh-based Heineken to save $388,000, reducing CO2 emisions and bridging the gap between associates. Not to ruled out, Microsoft is focusing on Lync for an upcoming telemedicine project, joining in on the widespread application of telepresence and telecommunication in many forms.

In the meantime, companies like Cisco and Polycom with others are designing and developing frameworks such as the Telepresence Interoperability Protocol (TIP), ensuring all equipment can work together. The technology is definitely being pushed forward, as video conferencing becomes much more seamless, flexed and tested in grand fashion recently at the largest competitive sports forum. Major IT vendors are placing a lot of faith (and funds) in video conferencing, knocking down the walls that confine conference rooms, connecting workers and clientele from anywhere in the world, adding newfound depth and reliability to global communications.