Jabra’s Mystery Gift: Our Hands-on Review of the Engage 75 Headset

Everyone enjoys receiving presents! Of course, we enjoy giving them as well, but not many can deny that receiving a surprise is really awesome. So, when a mysterious package arrived for me at the GetVoIP office, I was a bit giddy with excitement and curiosity.

As it turns out, Jabra had worked with the team to send this covert package my way without me even knowing, and to say I was really pleasantly surprised was an understatement. Among some extra little gifts was Jabra’s latest holy grail, their new Jabra Engage 75 Stereo Headset.

Turns out, Jabra was really curious to see what I thought about their latest headset, and I was really excited to give it a try.

Everyone enjoys receiving presents! Of course, we enjoy giving them as well, but not many can deny that receiving a surprise is really awesome. So, when Jabra sent this package my way without me even knowing, I was really pleasantly surprised.

Of course the first thing that greeted me, after the UPS box that is, was a fairly basic package from Jabra — I already like the minimalism. Just a solid black box, with one neat Jabra logo. Right to the point. 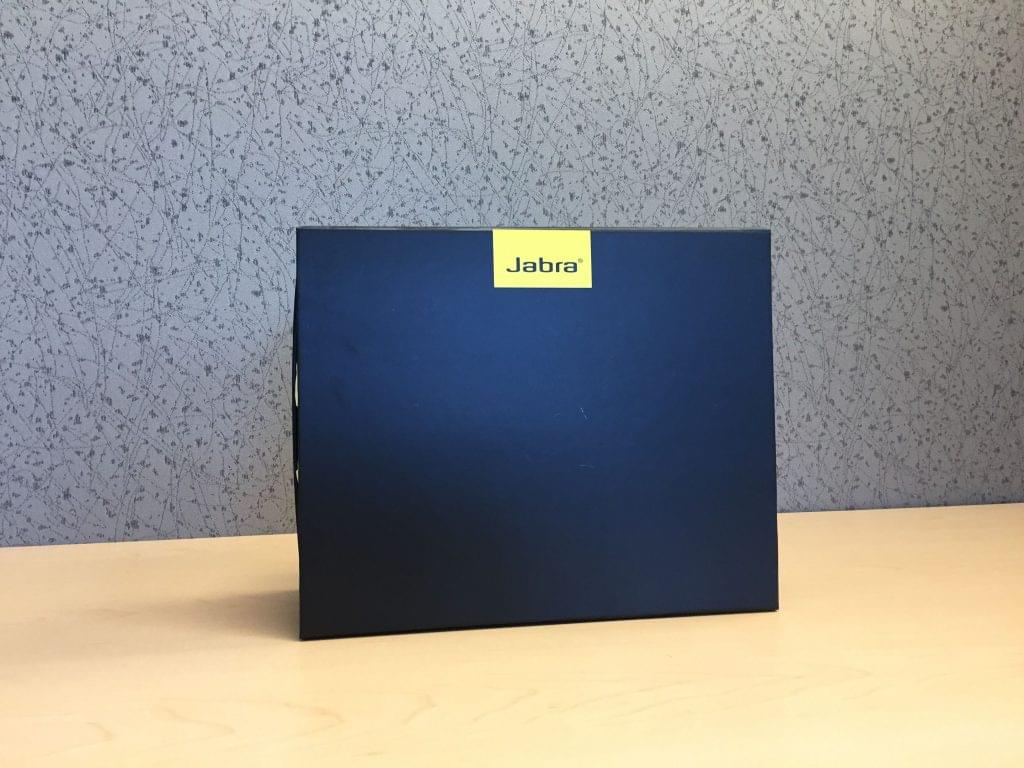 Upon opening the box, I was greeted by some yellow tissue paper, continuing that Jabra theme, just barely covering the rest of the contents, which included: 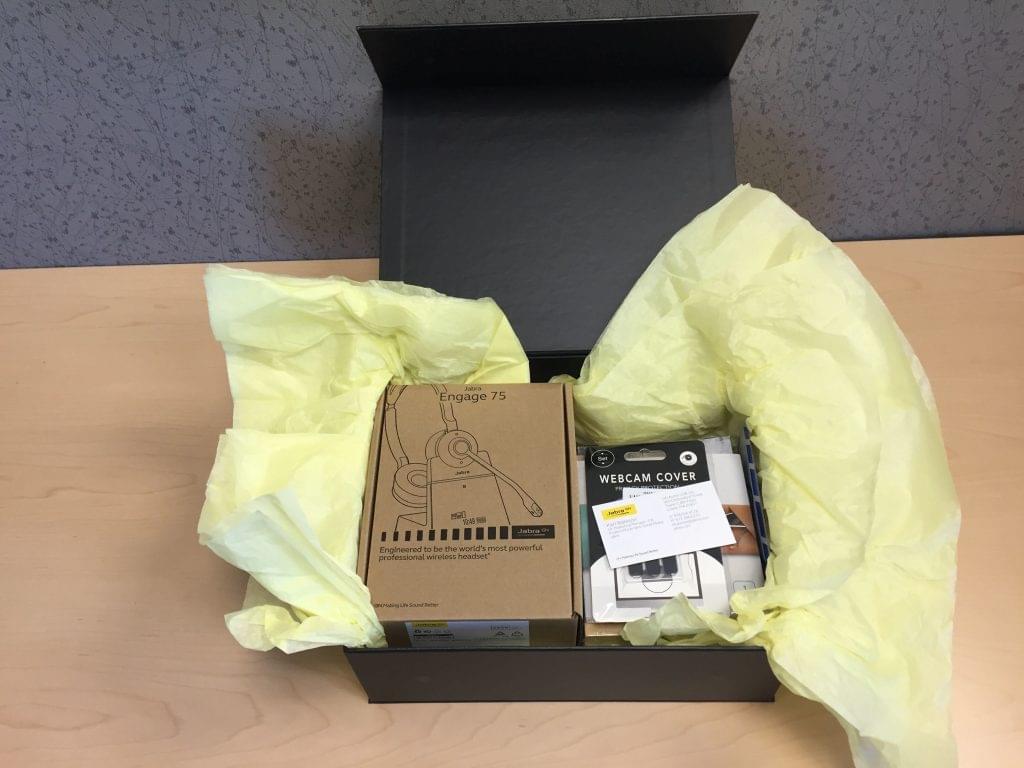 Right away there was a theme that stuck out, even before I read Jabra’s included notes. The Jabra Engage 75 would be the perfect headset for a spy. Dubbed as the “world’s most secure headset” by Jabra, this device packs some powerful encryption to keep intruders out. 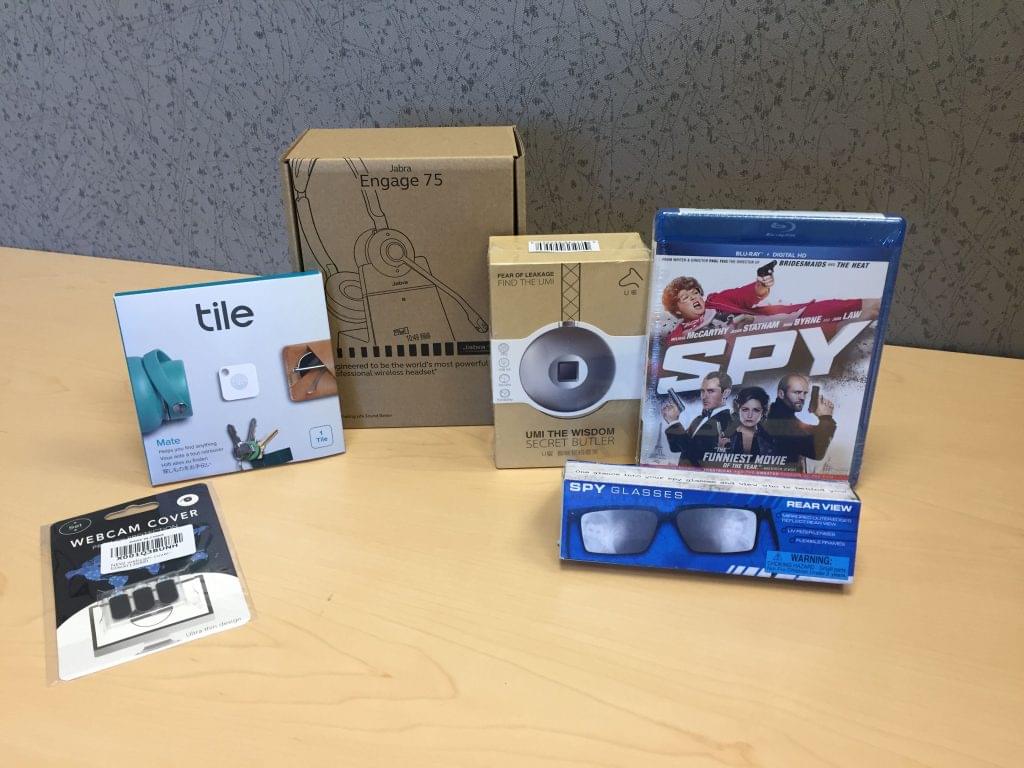 And to follow suit, of course, the package contained the rest of my new spy kit, what with a super secret fingerprint USB flash drive, webcam covers, and of course spy glasses.

But in reality, the main focus here is the Engage 75 headset. Jabra sent over this package so we can take a look at their latest flagship headset, and offer our honest take.

What’s In The Box 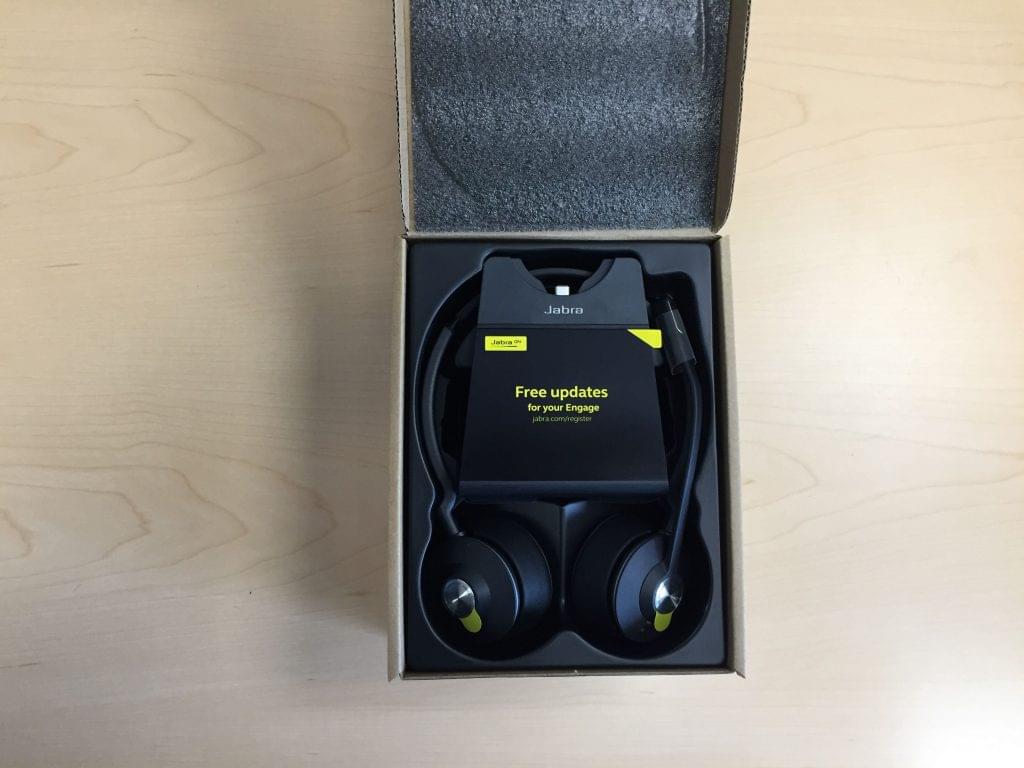 Unpacking the Engage 75 Stereo Headset isn’t the most ceremonious experience, but it is absolutely pragmatic and well designed. Some of us love fancy and complicated packaging, but I prefer a simple experience — minimalism and simplicity.

The Engage 75’s packaging opens up to display just that, the headset right in front, wrapped around the base unit. Under t he base unit, and a divider, are all the cables necessary to hook up your Engage 75 headset and base unit. That’s it.

Everything is presented cleanly, is easy to open, and easy to access. 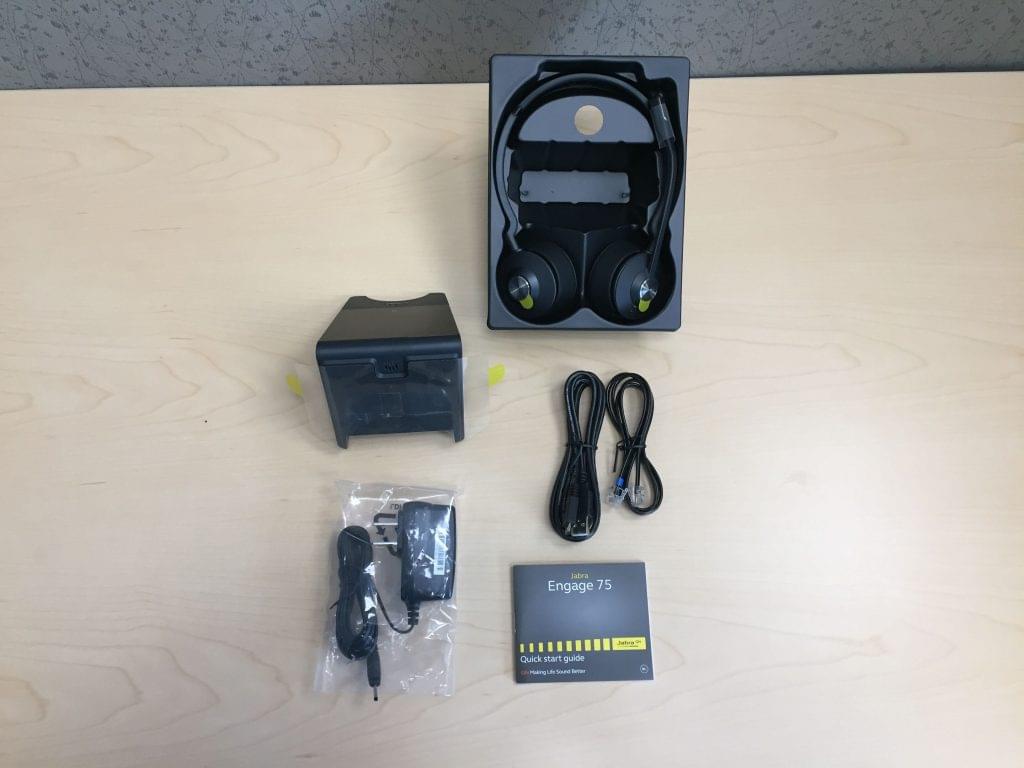 There aren’t any bags of little screws or clips to lose. In fact, the only items you will find within the box include:

Overall, setting up the headset was super easy. Simply plug the base unit into the wall, plug into the IP desk phone or related device you want to use, confirm on the on screen options, and away you go.

Bluetooth connectivity was super simple as well, and had zero hiccups. Just preform the standard Bluetooth pairing process and calls will start coming in. We didn’t attempt to connect the Egange 75 with any softphones, but there shouldn’t be any issue when using popular softphone options like Bria and ZoiPer.

The Jabra Engage 75 at a Glance

There is a lot going on with Jabra’s Engage 75, and of course there would be — it is their top of the line offering after all. But there is really one key point that Jabra really wants to highlight, and that is a major focus placed on security. 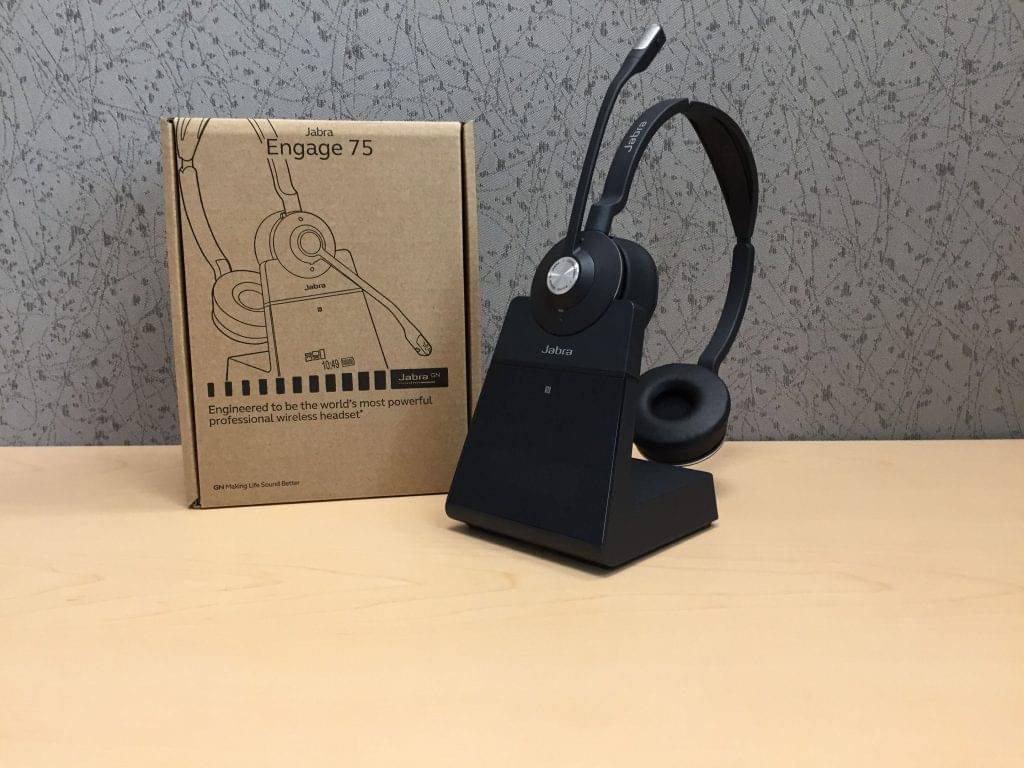 After a claimed “115,000 hours of development,” and registering four new patents, Jabra has released what they are calling “the world’s most secure professional wireless headsets.”

With 256-bit encryption, physical assisted pairing, and much more, Jabra has set the stage for a fairly unique and powerful headset.

Overall, these are some impressive specs. The effective 150m (490ft) operating range puts the Engage 75 a bit above standard, with most DECT headsets topping off around 300ft or so.

What is pretty cool about the Engage 75 is the ability to of course connect to an IP desk phone, but also the inclusion of two extra USB ports, softphone capabilities, and even Bluetooth connectivity with the ability to pair with two mobile devices simultaneously. Standard audio connectors are included as well, with RJ-9 and RJ-45 for various handsets, desk phones or speakerphones.

The battery life was a pleasant surprise as well, with a reported talk time of 13hr, and standby time of 52hr. While we didn’t have a chance to fully test out the talk time, the headset hasn’t needed a second charge the entire time it has been with us.

Speaking of which, the reported charge time of 90 minutes seems to be accurate, if not an overestimate. Our headset charged from roughly 20% up to 100% in under an hour.

A Closer Look at The Engage 75 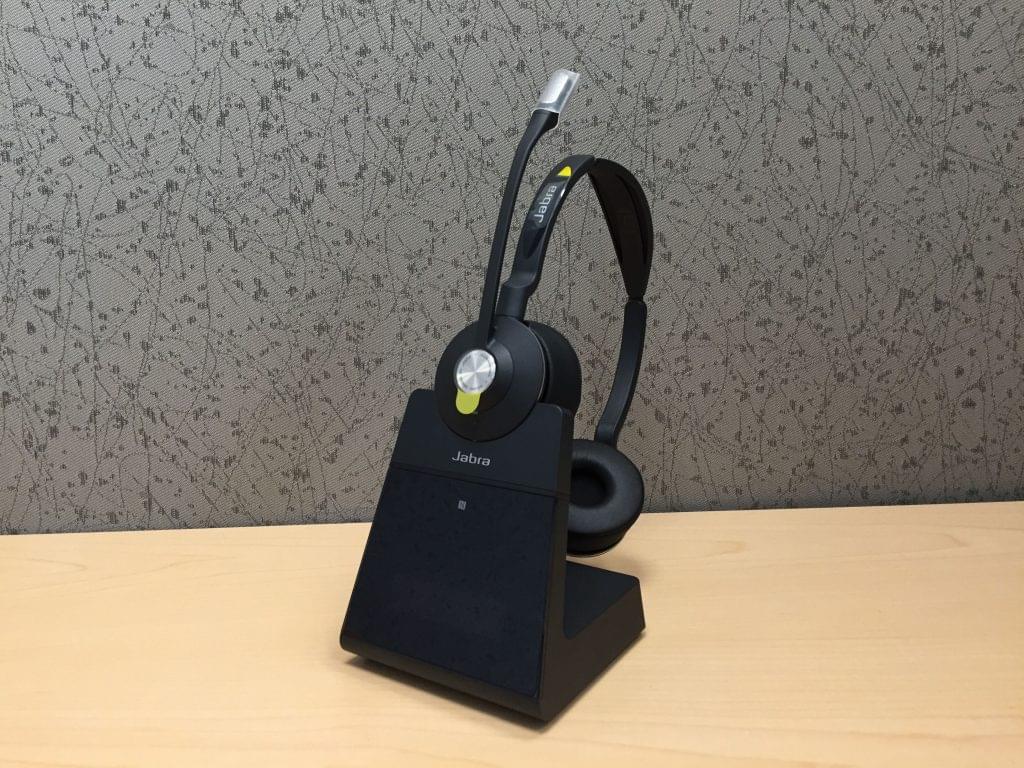 With tiny construction and minimal design, the Engage 75 headset is incredibly light, and easy to wear. The small, on the ear padded headphones are comfortable and easy to rotate or adjust for the right angle.

The mic can swivel back and forth in both directions for ambidextrous wear, and the size can easily be adjusted as well, just like any standard band style headphones. There is a micro USB port under the bottom of the headset 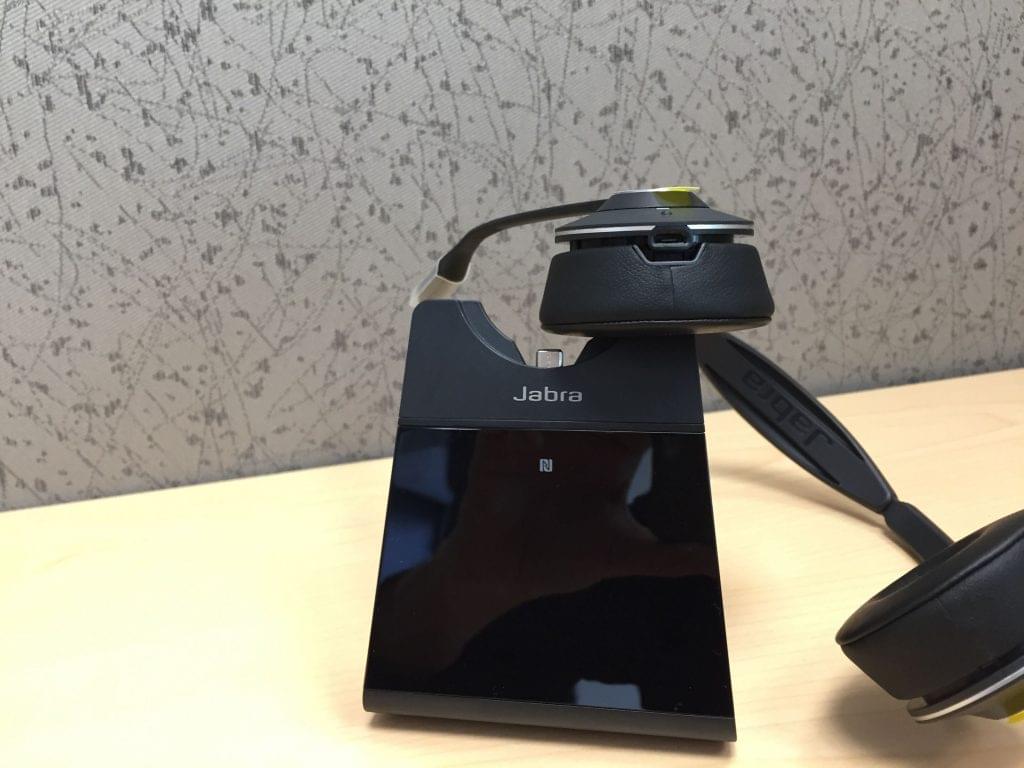 There is an indicator light on both the microphone, as well one of the earphones, which will glow red when the user is currently in a call.

I sat at my desk with the headset on for hours, and not once noticed any pressure or discomfort on my ears, normally associated with the “clamp” effect that comes from on the ear headphones, and barely even noticed it resting on top of my head since its so light.

The Party Piece: The Base Unit

Being that this headset is a DECT connected device, it requires a physical base unit to pair with devices, as well as charge. The base unit itself is a really well designed device, too. The unit is again well constructed, with a very solid feel, and holds the headset surprisingly well, with only one earphone even making contact. 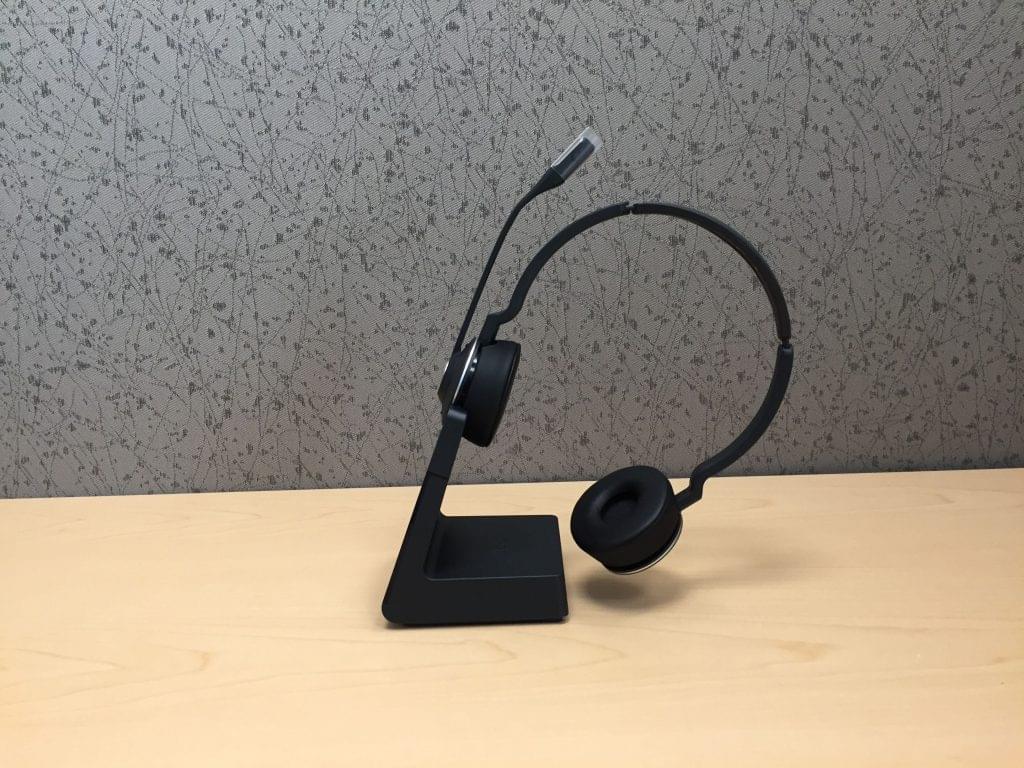 The bottom of the base unit has a soft foam pad to prevent any slipping on the desk, the back contains all the ports and connections mentioned above, and the front of the device simply displays a neat little Jabra logo, as well as the gloss black touch screen.

The top of the base includes a USB B plug, where the headset itself can be docked for storage, as well as charging. What I really, really like about this connection is the absolute simplicity of grabbing the microphone off the base without any effort.

This is great for those that really need to just grab the headset as quickly as possible. The only slight downside here is that placing the headset back on the base takes a slight effort, but really isn’t that difficult once you get used to it. The base of course does include digital call control buttons, with an answer, end call and volume control. 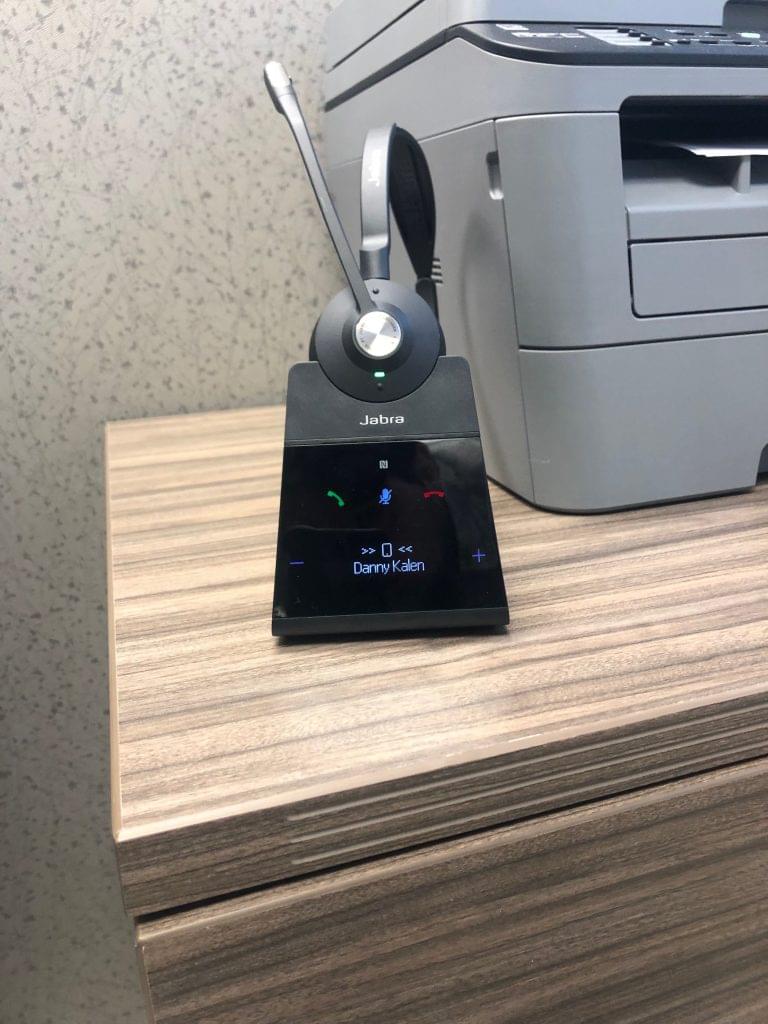 The touch screen isn’t massive, and like other glossy surfaces tends to collect finger prints. However, the  screen itself is easy to read, and responsive to touch controls. While I understand the desire to keep the size of the base unit itself down, a slightly larger screen would have been a big improvement — some lines of text wrap around and get cut off, making navigation a little confusing at times.

But all in all, the base unit does what it is meant to do — serve as the central hub for connectivity, configuration, and charging.

A Quick Note on Security

Now when Jabra sent over this nice package, they included a little run-down to highlight some of the main features and functions of the Engage 75. As I mentioned above, if there is one specific feature that really sticks out, it has to be the level of security Jabra built into this headset.

Jabra designed the Engage 75 to include:

Essentially this is an authentication feature, ensuring that only the proper user can actually use the base or headset, so that it can’t be compromised by any random passer-by, unlike more standard IoT devices which can act as a gateway into your network.

The 256-bit Encryption is a bit unique, as well. DECT devices generally have some basic security built in no matter way, with the standard being 64-bit Encryption. Bluetooth can be seen as a slight security upgrade, jumping to 128-bit encryption, but lacks the range and consistency of DECT.

So what Jabra did was find the best of both worlds, and engineer their own DECT powered headset with built-in 256 bit encryption, while also managing to squeeze out an impressive range of 150 meters. Combine this with physical assisted pairing and other authentication factors, and you can begin to understand what makes the Engage 75 so secure.

I was mainly impressed with the Jabra Engage 75. Now, it is worth noting again that we did not have a line-up of other headsets and devices to compare to. 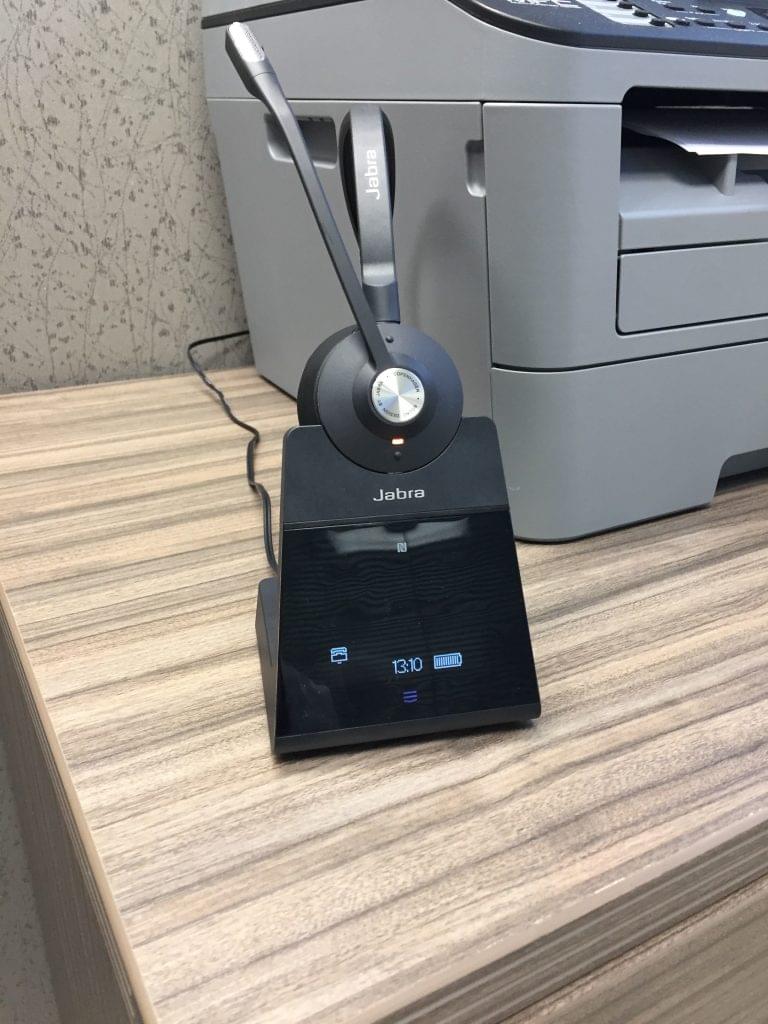 However, the Jabra has quite a bit going for it when compared on paper to other options. And while we have no had any direct competitors at the time of reviewing, we have had a chance to test out and handle multiple call center headsets, headphones and microphones over time to establish a reference point.

Jabra’s Engage 75 manages to hit a bit of a unique point, with that strong focus being placed heavy on securing the device, and its connections. This should really be noted as a massive benefit. I’ve written time and time again that everyone, especially businesses, should be taking security much more seriously, especially after things like ransomware are becoming so common.

In this day and age with constantly connected devices, it is becoming easier and easier to find a way into your organization’s network. Protecting the network in anyway can save yourself from massive headaches, and potentially both time and money.

However, looking beyond security, the Engage 75 manages to deliver on most fronts as well. This includes impressive connectivity options with two USB ports, as well as two simultaneous Bluetooth connections.

The Engage’s range and battery life are both impressive as well, with further range and longer life than most competitors.

At the end of the day, the Jabra Engage 75 clearly fits the bill of a flagship headset. This impressive connectivity, unique security features, solid usability, and a great comfortable design, it absolutely stands as a strong choice.

I of course want to extend a warm thank you to the folks at Jabra for sending this package over to us at GetVoIP. We’re always curious and itching to get our hands on the latest gear and tech to experience the latest developments and newest gadgets first hand.

Without a doubt, Jabra’s newest Engage 75 Headset is an impressive piece of kit. When you consider the price, generally from $300-$440, it becomes much more important to take a close look at some competitor’s as well.

However, if security is your main focus then this absolutely is a must have. Either way, your money will be well spent on the Jabra Engage 75 with great performance, and some nice bells and whistles.