I have not been to a conference in nearly three years, even though I almost attended Enterprise Connect 2021 live and in person. Sadly, the event got canceled a few days before my voyage halfway across the world.

Even though I still made the trip, I could not attend in person. So, I did what everyone else does during these times – attend the conference virtually. It was a well-executed conference and felt (mostly) like it would in person. Simply put, the underlying technology was robust enough to foster such an experience.

Video conferencing giant, Zoom; is hoping to do just that – with the introduction of Expo from Zoom Events. The feature lets event organizers set up virtual exhibitions that connect attendees, sponsors, and other booth representatives. I reached out to Zoom for comment on the new features, and a spokesperson for the company told GetVoIP News:

“While on that virtual expo floor, event organizers/hosts can move freely around the space, network with individuals through one on one chat, and join other participants in Expo booths for topic-based conversations.”

Attendees can interact with sponsors as well as engage in live chats. Booth representatives and sponsors can host simultaneous conversations in a booth, and attendees can preview those meetings before joining. There’s a lot to unwrap here, so let’s dive into Zoom’s latest features release.

Expo from Zoom Events extends space for one-on-one chat between two people. “As long as a user is in Expo and is open to network, anyone on the expo floor can initiate a direct chat with them.”

When event hosts enable “networking,” a “chat” button appears in their profile. When the networking feature gets turned off, the Chat button does not appear in a user’s profile. Attendees gain control over their chat preferences and can refresh preferences when joining the Expo floor via the “Preferences” tab. 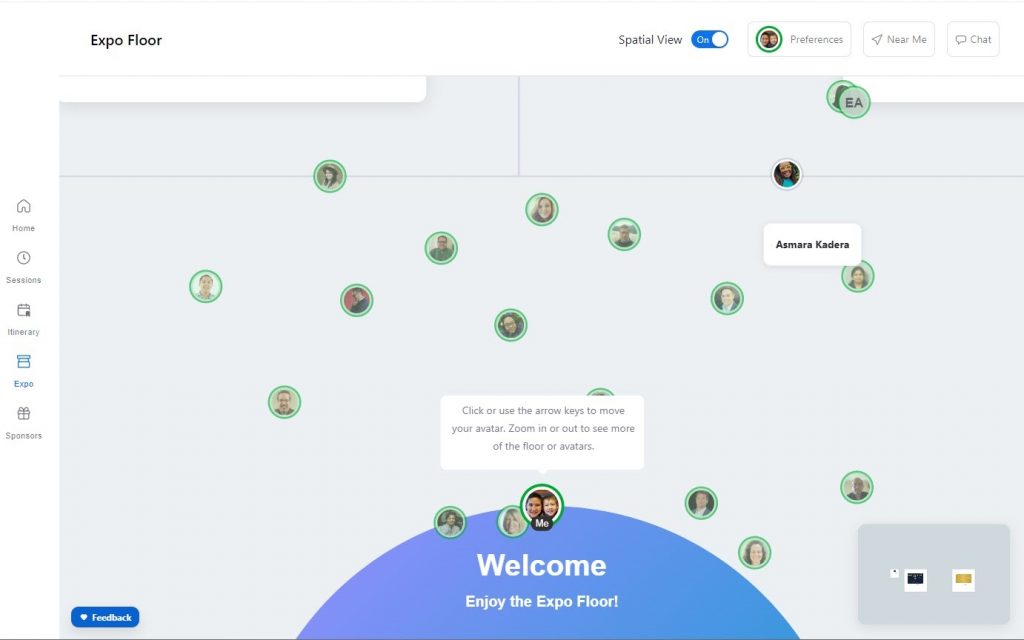 Expo extends support for two types of booths: one of the sponsored nature and another of the non-sponsored variety. Users can set up their booth with a series of Zoom Meetings, or Spaces, that attendees can choose to join during Expo hours. 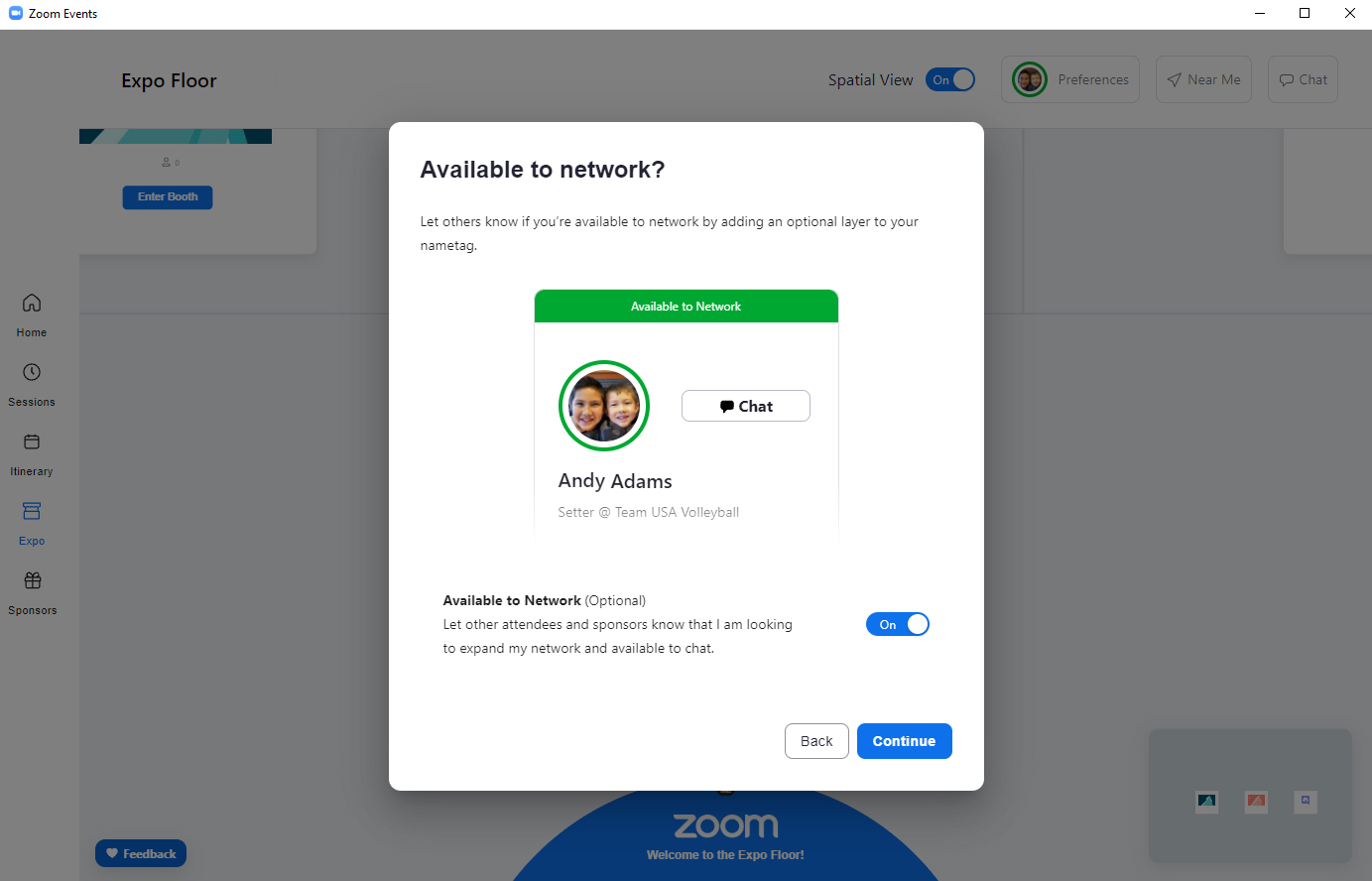 Booth reps can host multiple simultaneous meetings, while attendees can preview a conference/session before joining to ensure it is what they’re in search of and leave that session to join a Breakout Room with other experts.

When it comes to the design of the desired space – hosts can set up their Expo space using premade Zoom templates. They can also design custom spaces with a simple drag-and-drop tool that helps move booths around. According to Zoom, hosts can add over 100 booths to their Expo. We can expect to see this number rise as the spring comes around and tech conferences become more prevalent than dust particles in the air.

When assigning roles, Zoom Event hosts have a ton of flexibility in extending access to ticketing for Expo representatives, like sponsors, sponsor reps, booth owners, and booth reps. If you want to give them access to enter the Expo floor early to set up and start the sessions before the Expo is open – you can. Let’s break that down a bit further.

Primary sponsors can edit elements like session details, and they receive a “sponsor rep ticket,” which acts as an alternative host ticket that can start the Expo Booth sessions. Sponsors also get an attendee ticket for all other sessions. 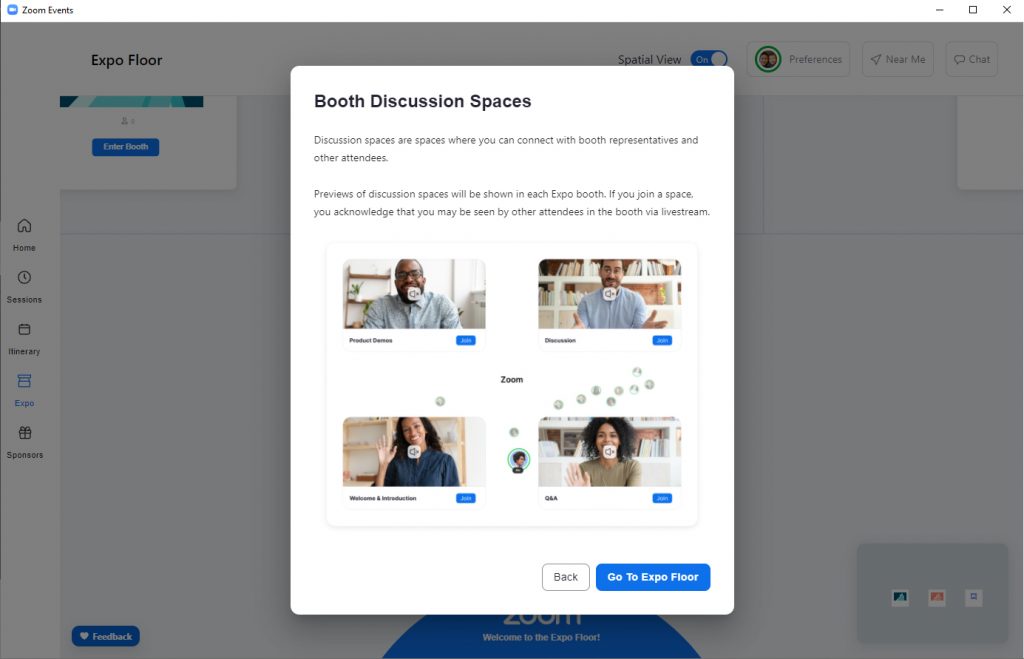 Sponsor reps will have an image that shows on the Sponsor detail page. They further gain access to a host ticket that can start Expo Booth sessions – along with a ticket for all other sessions, too.

Booth owners act as the primary owner of a booth, and their image does NOT appear on the Sponsor detail page. The booth owner; does, however, receive a sponsor rep ticket that is an alternative host ticket to start the Expo booth sessions and can attend all other sessions, as well. The same goes for booth reps.

According to Zoom, Each role can enter the Expo floor early to set up and begin sessions before the Expo starts (officially).

Of course, no Zoom announcement is complete without some general platform updates. Along with Expo, Zoom announced updates across four areas, ones set to impact the entirety of its video conferencing platform.

New to Zoom meetings, users can enable language interpretation by default. Automated language support in the web client is now available, while users can add also add (video) to Waiting Rooms. Users can also now reset virtual backgrounds to default after each meeting and enable (or disable) visual watermarks in virtual meetings.

Developers on the Zoom platform have new categories and tags on the App Marketplace.

“To help app developers drive the discovery of their app and enable more Zoom customers to find apps that work with Zoom, we’ve updated the app categories on the App Marketplace.”

There are eight new categories that help developers map their app when submitting details in the app build flow. Zoom says it updated some of its existing categories as well.

Zoom’s popular Zoom Phone offering added fourth-party to three-way phone calling – a feature available in beta.  Finally, Zoom is looking to tackle the issue of unanswered calls with a feature update. Here’s what it said in a statement:

“We adjusted our group call pick-up feature to be more informative and less disruptive with a more subtle ringtone and a notification that informs group call members whether the call went to voicemail or one of their colleagues.”