Going back to the office is more of a reality today; than during the middle of the Coronavirus Pandemic. We have not only entered a new year but we reached a lot of critical milestones pertaining to the Virus. Coronavirus case numbers, hospitalizations, and deaths are down significantly amongst the vaccinated.

Quite frankly, we have a lot to celebrate and be thankful for – emerging from the Pandemic. During this time, however, folks like knowledge workers, contact center agents, and countless others from government employees, magistrates, educators, and even physicians – worked from some form of video conferencing, unified communications, contact center, or collaboration platform.

While some grew to love working from home, others felt isolated, lonely, and even overworked at times. Some left jobs to prioritize what was important to them moving forward. That manifested in people looking to achieve (greater) work-life balance and flexibility, and it felt that many attained this status during a period of mass (and rapid) UCaaS adoption.

Now, here we are. Countless company executives want to go back into the office. They are bright-eyed, bushy-tailed, and armed with fresh ideas for reforming an office; also hoping to exhibit their knowledge on the possible implementation of new safety measures based on ‘CDC’ (Centers for Disease Control and Prevention) guidance for testing: and even putting in place vaccine mandates in some cases.

Employees, nonetheless, remain split; but data show us that there is a happy medium known as hybrid work. A late 2021 study conducted by team collaboration app developer, Slack, found that there was already a disconnect between executives and employees on returning to the office. That same study found that 57 percent of the survey’s 10,000 respondents said they would look for another job if another one meant greater flexibility.

Despite overwhelming evidence that working from home extends a ton of benefits – companies like American Express have told employees they do not have to – but they are encouraged to come back to the office for a soft rollout on March 1, 2022.

A few weeks later, American Express has plans for a full-scale return to the office. Other financial institutions, namely Goldman Sachs and JPMorgan Chase, told workers they had to return on February 1, 2022. Citigroup announced a similar policy – warning vaccinated employees in the United States they must come back to the office at least two days per week – beginning March 21.

According to Costar and the National Association of Realtors, office occupancy rose 84% in 390 of the United States metropolitan areas tracked by the firm during Q1 2022. The Association also notes that rent is getting higher in 98% of those markets – with tech companies largely fueling the boom.

Choice/Hybrid Work to Win Over Employees 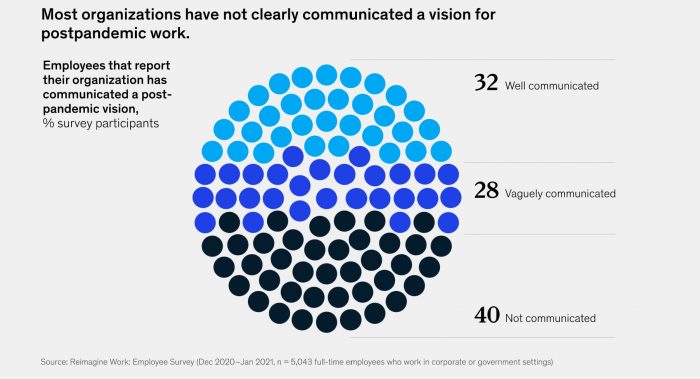 BNY Mellon, a financial institution, is one of the few Wall Street players to break with tradition, extending flexible work options to its employees in the highly-regulated world of banking. The fate of almost 50,000 global employees now lies in the hands of managers, they will eventually tell employees which days they have to come into the office.

On the automotive front, Ford Motor said it would adopt a new hybrid work model where employees choose the days they work from home and the office, giving way to employee choice. Popular video conferencing system developer, Zoom; recently announced similar measures – permanent work from home or employees could choose which days work best for them to be in a physical office (if they wish).

Even media outlets like the New York Times announced it would allow its staff to (gradually) return to the office. Eventually, it noted, employees could choose how/where they wanted to work. Meta, formerly Facebook – gave its employees until March 14, 2022, to decide how to work. And they have a few options: go back to the office, ask to work from home for good, or temporarily for three to five months.

Collaboration giant Microsoft gave its employees thirty days to adopt their new/preferred working styles with managers. Others like Cisco, Slack, Apple, Amazon, Dropbox, Google, Hubspot, Indeed, Salesforce, and Verizon; all say employees can work from home permanently if they wish to.

Lots to Lose if Employers Don’t Get Things Right

Not getting this right means risking a lot. Dedicated and long-term employees are increasingly difficult to come by because they are attracted to the idea of freedom or not being tethered to a physical location with a micromanaging boss breathing down their neck.

Gone are the days of employers holding (all the power) over employees, which was never a healthy place to be in – in the first place. It seems that employees have more brawn than before the Pandemic, with them now calling the shots on where, how, and in some cases, when they work. 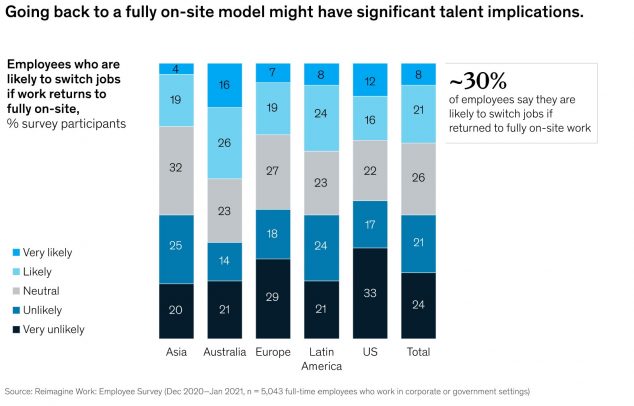 Though there is still lots to discover about working remotely and the impacts on our mental health, there are most certainly a lot of benefits. Some experience loneliness, sadness, and experience isolation, while others experience more balance and say they have more time to spend doing things for themselves and with family/friends.

It will be principal, moving forward, to listen to employees, gather input on how to help them experience more of a team environment in a virtual setting. I can’t imagine a rational reason employers (knowing what they know now) would continue not listening to employees – especially understanding what’s at stake.