What Does a Four-Day WorkWeek Mean for the FOW?

The push to make a four-day workweek a reality is gaining momentum all over the United States. California Congressman, Mark Takano (CA-41): recently proposed the 32-hour workweek; with the introduction of a new bill, adding that the measure would likely extend individuals greater flexibility.

Congressman Takano’s argument: Following two years of the Coronavirus Pandemic, one that pushed millions of employees to explore remote work options, we cannot, and, he adds, should not – “return to normal, because normal did not work.” The Congressman went on to say:

“Before the Coronavirus Pandemic, people spent more time at work and less time with loved ones. Their health and well-being worsened, and all the while, pay remained stagnant.”

Thousands of U.S.- based employees are already testing out the concept:

He argues that the Pre-Pandemic style of working was not healthy, and many experts would agree. According to the Pew Research Center, roughly a quarter of American workers said; that they are less satisfied with their job than before the Coronavirus outbreak. Many of these folks still put in the same – if not more hours to keep up with the pressure of working from home, however.

Employees who work from home want to get noticed as productive and never to have been slacking, which might cause employees to suffer from things like anxiety and the fear that they might get fired if they do not perform as expected.

The Great Resignation Altered Everything

Before the Coronavirus Pandemic, employers held a lot of power. Today, though, the tables have turned – primarily due to an event that seemingly blindsided most employers – waves of mass employee resignation.

In January 2021 alone, upwards of 4.3 million Americans left their jobs. Those folks; cited various reasons, including having felt overworked and underpaid at the time. Working mothers, according to the Pew Research Center: were chief among that group of resignees, among the millions to take the plunge, noting they didn’t have enough balance.

Experts say the phenomenon is unlike anything we’ve seen before, with most experts deeming it “the great resignation.” It did, however, seem to motivate some employers to reconsider if they were willing to compromise or not. Savvy businesses did just that, while others failed to hire fresh recruits to fill principal roles. 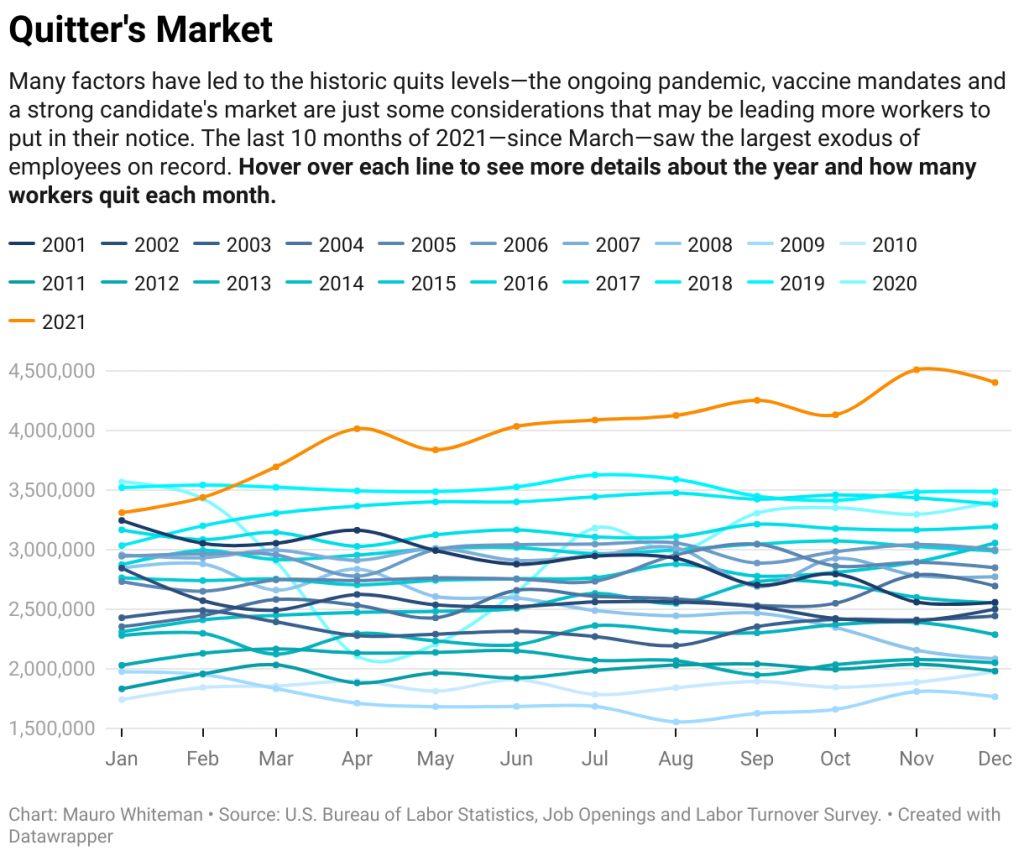 This left operations in some organizations stagnant and unable to keep up with customer demand in some cases. In what many employers saw as an act of defiance, others (namely employees) viewed quitting their jobs to achieve greater flexibility – possibly (in the form of) better work-life balance – as a positive. All this brings us to today, where the possibility of a four-day workweek is here.

Since the onset of the Pandemic: it seems that some companies (and even countries) have come to their senses, with the likes of Calibre, Bolt, CIB Group, Dassana, Panasonic, The United Arab Emirates, Uplift, Basecamp, Shopify, Kickstarter, Shake Shack, and Toshiba, all launching some form of pilot/permanent four-day workweeks.

In 2021, Spain launched a four-day workweek in response to a need for greater flexibility and balance, while 17 companies in Ireland recently made the switch in January 2022.

The goal of a four-day workweek, after all, is to enhance elements of the employee experience like satisfaction, retention, and productivity. There is another aspect that sometimes gets overlooked – it may also boost employee mental health, a concept that’s gained a lot of traction since the onset of the Coronavirus Pandemic.

According to research by Qualtrics, Seventy-nine percent of U.S. employees said a four-day workweek would improve their mental health, with 82% adding that it would make them more productive – precisely the objectives of a four-day workweek.

The research firm also found that a whopping 92 percent of Americans said they want to work four days per week. It is, however, unclear if these folks understand the implications of a four-day workweek. We see the possibility of employees misinterpreting what a shorter week means. Is it an opportunity to ‘slack off?’ Thirty-eight percent of those surveyed by Qualtrics noted that a four-day workweek would encourage them to do just that.

There does seem to be hope, as sixty percent of respondents did say that a four-day workweek would not make them ‘slack off.’ In addition, to the possibility of a 32-hour workweek, there is also the chance that many folks will still work 40+ hours per week. It might take on a different form, like homeworking, or in the form of four ten-hour days.

This is the case in Belgium, where the country enacted a shorter, four-day ten-hour-per-day workweek.

And in some cases, employees might experience longer-than-usual workweeks as not everything can get done during the week. Sometimes employees have to put in extra time to ‘get the job done,’ and to match employer expectations.

The Benefits Far Outweigh the Downsides

Cost savings, increased productivity, less downtime, talent attraction and retention, autonomy, and much more appear to be the obvious benefits of implementing a four-day workweek.

And while there are some downsides, it appears – the benefits far outweigh what some see as cons of the concept. Inadequate coverage for customers and co-workers, scheduling conflicts, reduced hours, meaning less work/less money, added stress, and it simply might not work for everyone – all possible downsides to implementing a four-day workweek.

Of course, there is a ton of nuance involved in making such a decision. If a company plans to move to allow a four-day workweek, it could work to their benefit, but it could backfire as well. Being upfront with employees about expectations is paramount; and will remain that way moving forward. 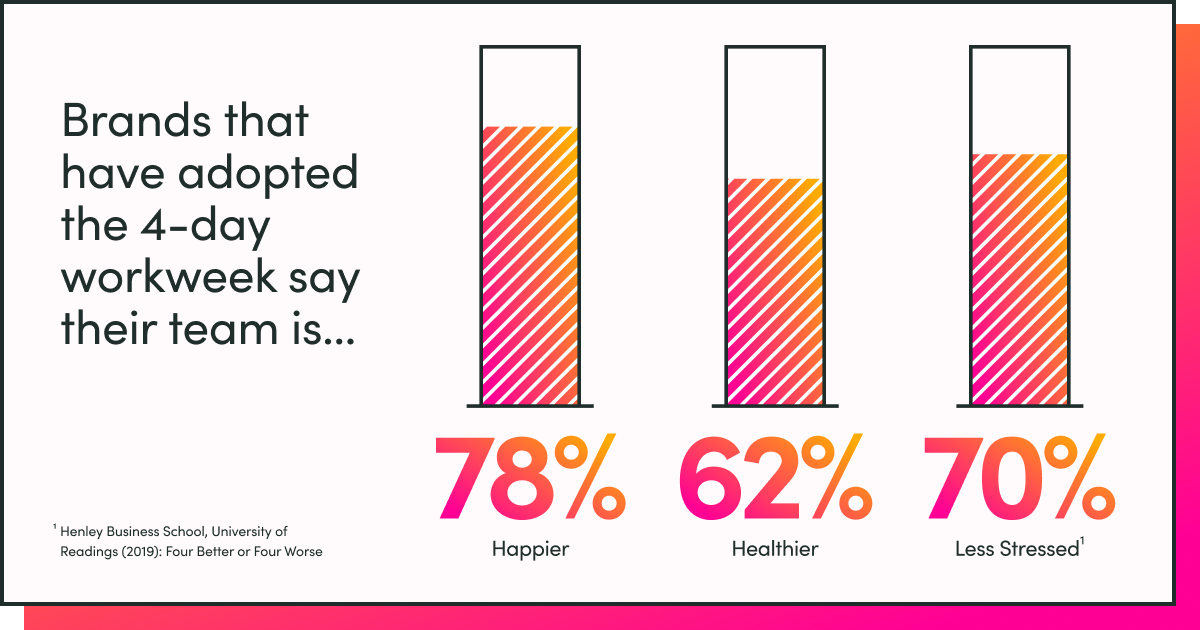 The experiment could become more of a permanent reality over the long term if we can manage to iron out countless fine details. This will take a lot of effort from all parties involved, and much trial/error to perfect the four-day workweek.

It will also be principal for companies to implement useful workplace technologies to enable a future four-day workweek, placing growing emphasis on the need for unified communications tools that facilitate real-time secure workplace collaboration.