Additional video calling tools like note-taking, in-meeting chat, and screen sharing take productivity to the next level while keeping everyone on the same page.

This Dialpad Meetings review covers key features, pricing options, pros and cons, and popular Dialpad alternatives to help you determine if it’s the right solution for your team.

What Is Dialpad Meetings?

Users can download the standalone Dialpad Meetings app as a free version, or upgrade to the paid Business Plan for access to more advanced features. 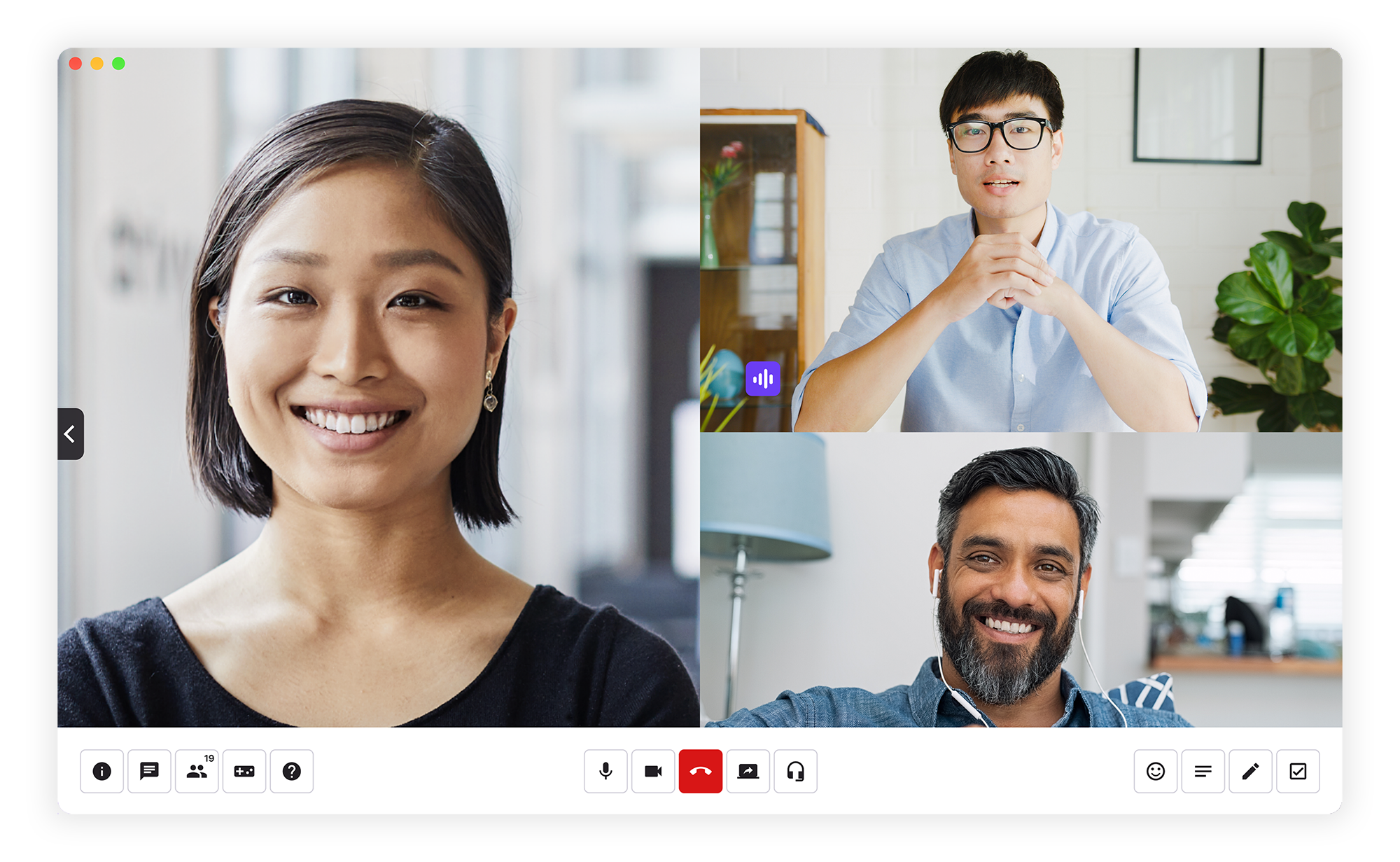 Dialpad Meetings is also included with all UCaaS Dialpad Business Communications plans, with the number of video participants increasing with each pricing tier.

Security features include Single Sign On, HIPAA compliance, encrypted recordings, waiting room, and Meeting Lock. Due to its affordable price and relatively low participant cap, Dialpad Meeting is best for startups and SMBs, particularly those with remote, hybrid or international teams.

Here are some of the key features that Dialpad Meetings has to offer. 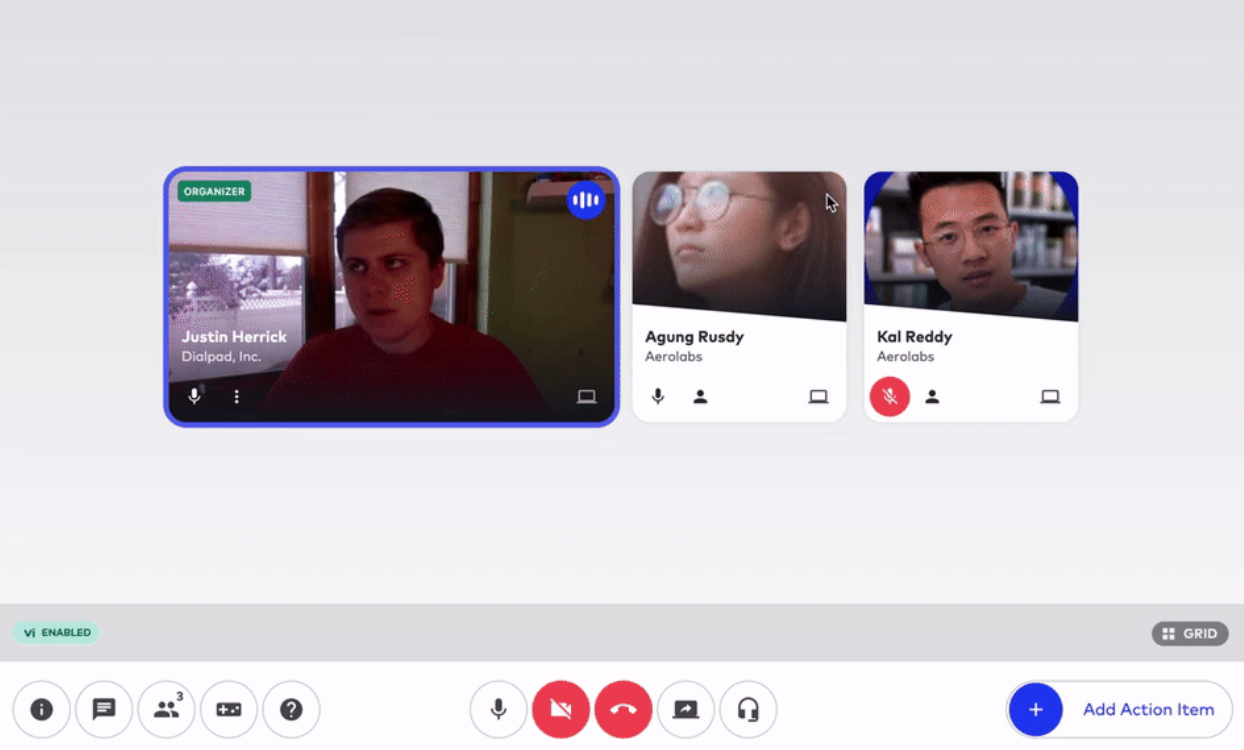 All video layouts are available for all Dialpad Meetings users.

The screen share function in Dialpad Meetings allows users to share their entire screen,  a single tab, or an application window on desktop or mobile devices.

For added security, organizers have the ability to stop any participant’s screen-sharing video stream. All screen sharing is encrypted in transit and at rest and is not maintained by Dialpad Meetings.

Screen sharing is available for all Dialpad Meetings users. 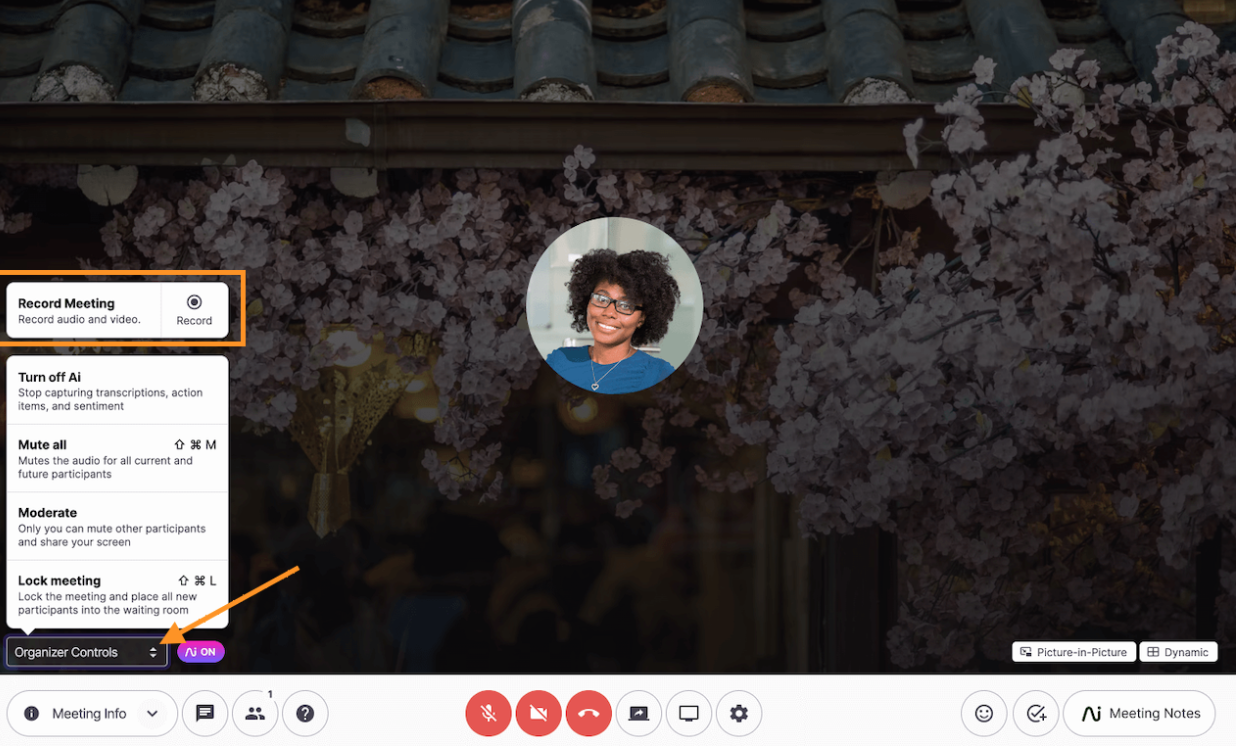 Everyone in the meeting room will receive an on-screen notification and audio message at the start of each meeting recording, simplifying compliance with call recording laws. Both automated and manual recording options are available, and recordings can be stopped, paused, and resumed at any point during the meeting by returning to “organizer controls”.

Video is captured in “Dynamic Layout”, a split screen that displays up to four participants in the order they most recently spoke.

When Dialpad AI is enabled, Meetings users can simply click on the “Meeting Notes” button during a video call and a side panel will pop up. The side panel displays real-time transcription of the meeting, including differentiating speakers.

Post-meeting summaries are in-depth recaps of video meetings that are sent only to the organizer after the meeting has concluded. The organizer can then choose to share a link to the call summary with other participants. 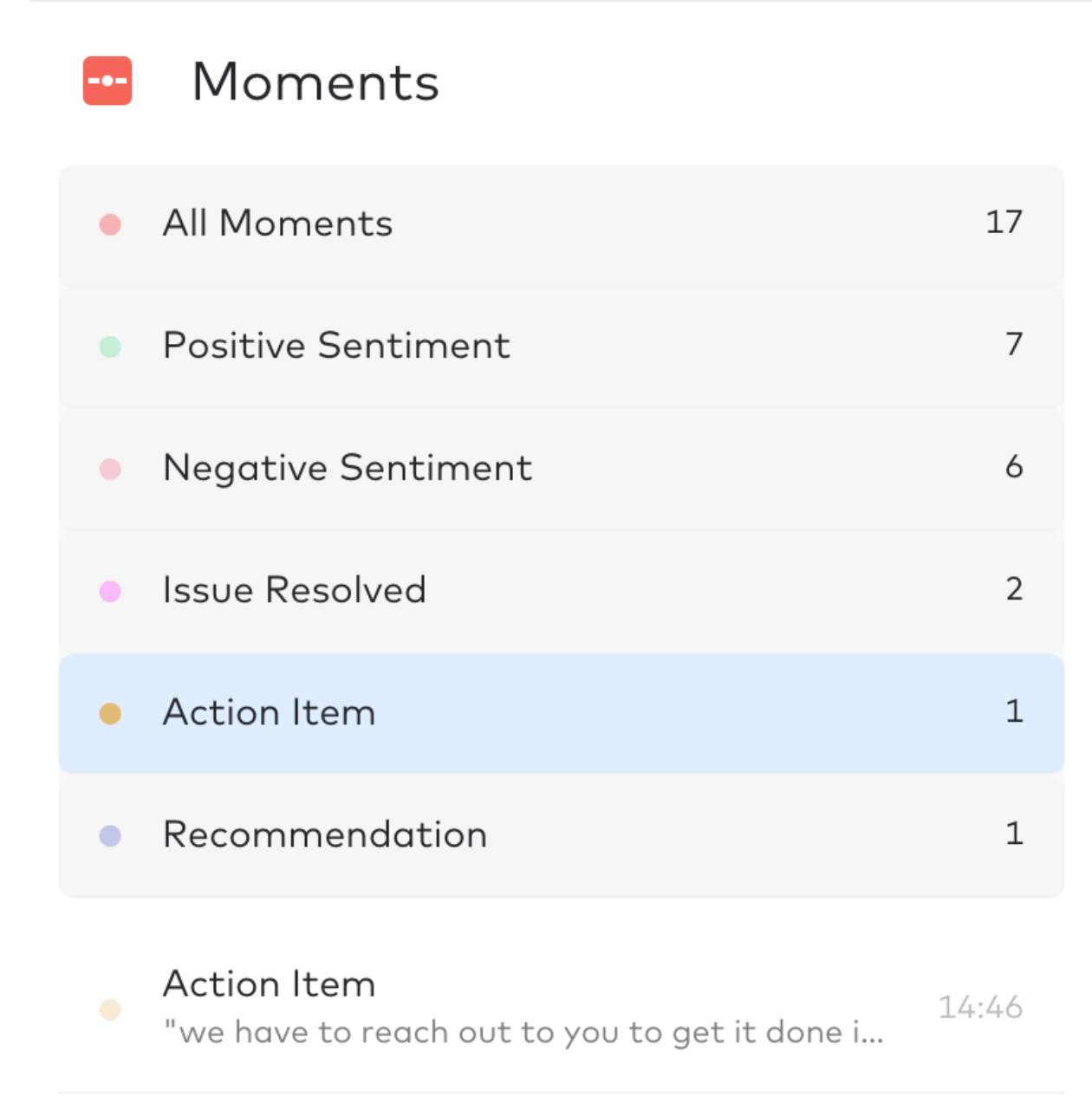 Action items, moments and sentiments are automatically noted and tagged by Dialpad AI during the meeting in real-time. This data is then organized as a searchable list in the post-meeting summary. Users can click on any “moment” to see the specific portion of the transcript when that moment occurred.

An action item is a single task that has been clearly defined during the meeting and must be completed after the meeting–for example, “I’ll call you tomorrow”.

Dialpad Meeting participants can also add their own custom action items during the meeting. These items will be added to the list generated by Dialpad AI and included in post-meeting summaries.

The Dialpad analytics dashboard gives admins the ability to see how their team is doing at-a-glance with visual representations of pre-selected KPIs. The analytics dashboard is only available to Business plan users and is limited to historical data (not real-time or same-day data). 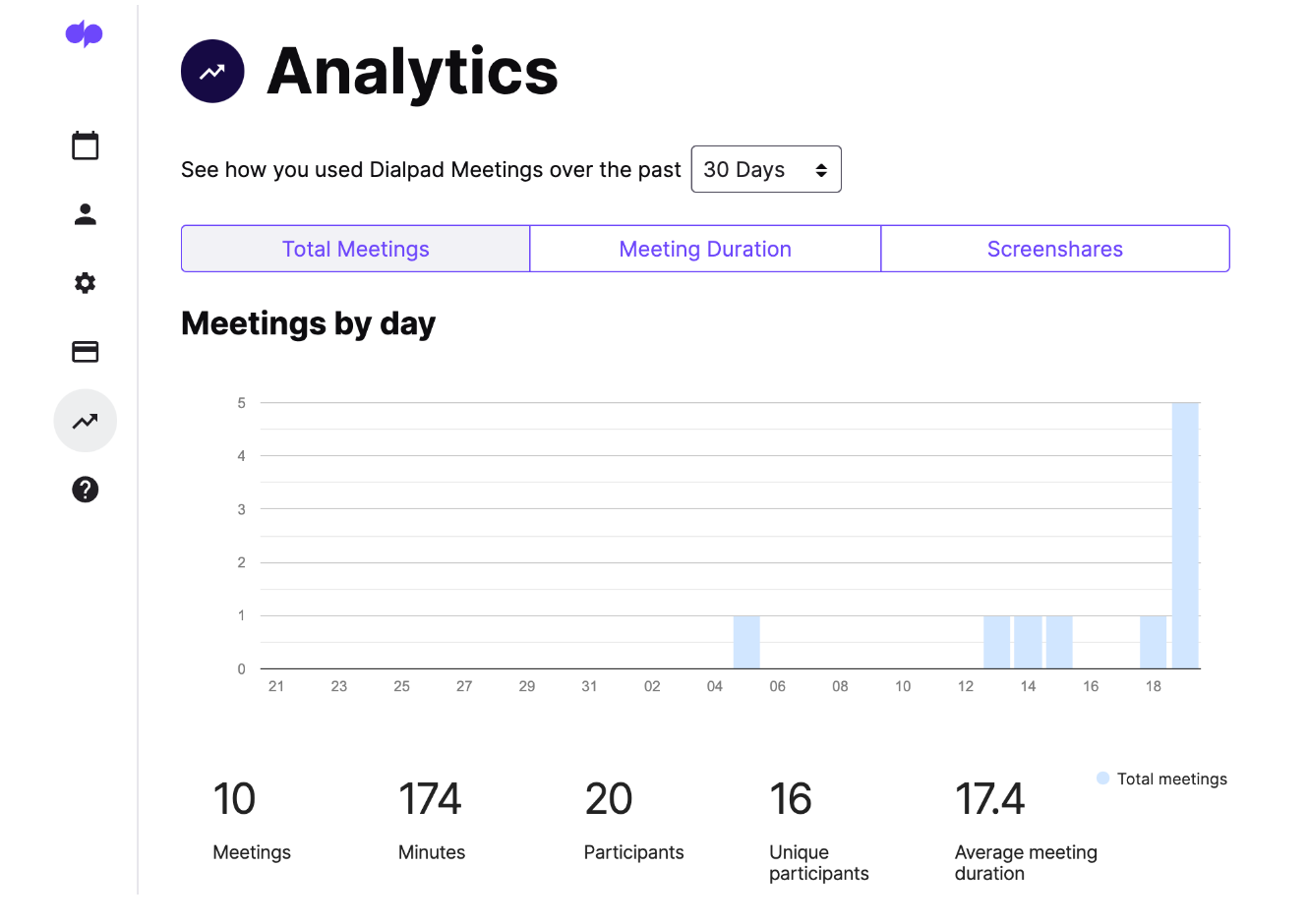 With Dialpad analytics, managers can view Meetings usage over the past week, month or three months. Usage for an individual or an entire team can be displayed.

Available metrics and KPIs  include:

All-time usage reports can be exported as CSV files.

Dialpad Meetings Business plan users can enable the dial-out feature to automatically dial participants before a scheduled meeting or even during an active one. 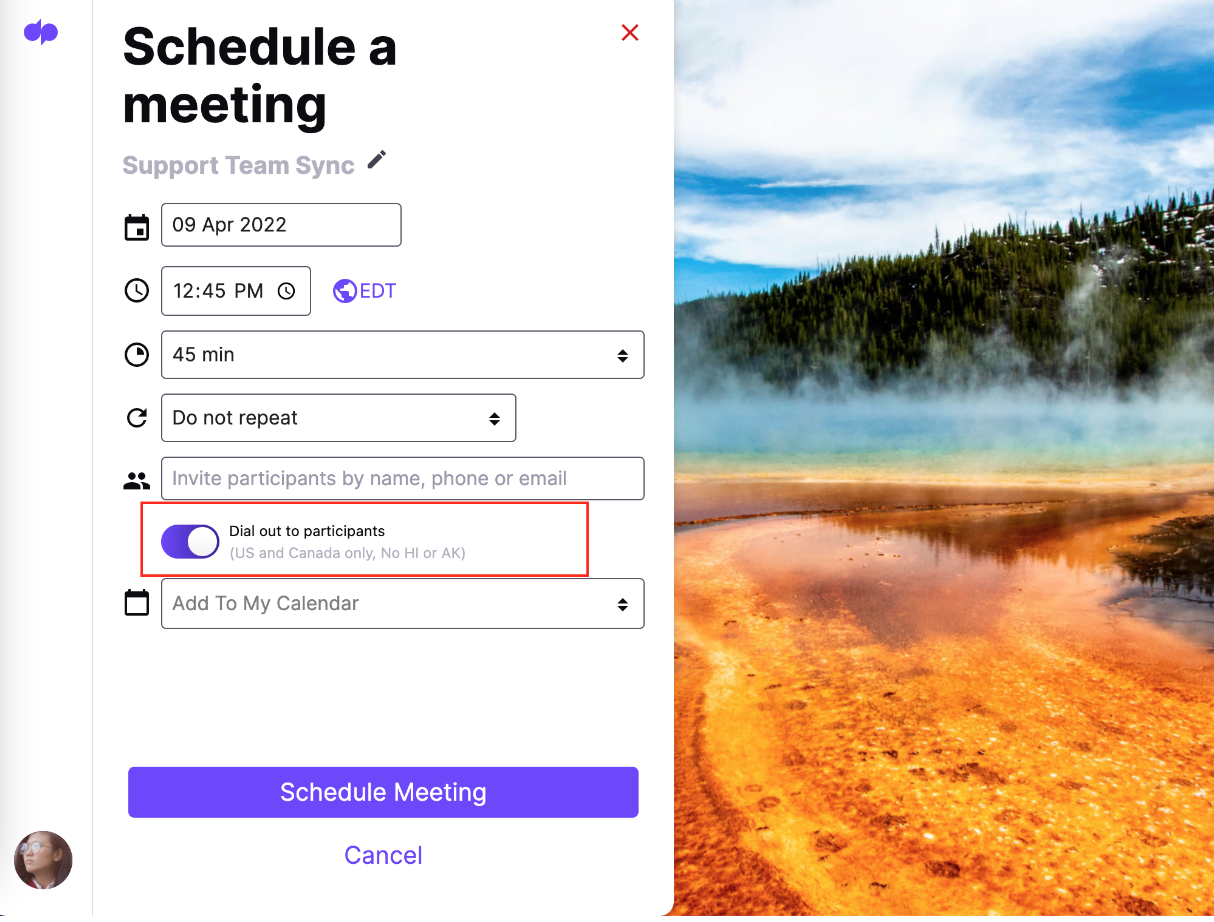 In the case of scheduled meetings, once participants are added and the dial-out toggle is turned on, Dialpad will automatically send participants a five-minute reminder via SMS, and then dial all participants right as the meeting begins.

During an active meeting, users can click on “Invite Participants” and switch on the auto dial-out feature in the same way.

Invitees who receive a dial-out can join meetings by pressing 1, and won’t be required to enter a pin, even if one has been set by the organizer.

Organizers are limited to 200 automatic dial-outs per day, and only numbers in the U.S. and Canada (excluding Hawaii and Alaska) may be used.

The Pros and Cons of Dialpad Meetings

Here’s a look at some of the unique strengths and specific drawbacks of Dialpad Meetings.

Compare Dialpad Meetings to Its Alternatives

Dialpad Meetings’ free plan includes unlimited free conference calls with up to 10 video participants for up to 45 minutes per meeting.

Dialpad Meetings is a cloud-based video conferencing platform that is easy to set up and use. You can create an account, log in and start a meeting right away.

While both Dialpad and Zoom have robust video conferencing solutions, they have different focuses. Dialpad Meetings offers more advanced AI-powered tools such as sentiment analysis and automatically generated meeting highlights. On the other hand, Zoom has a much higher participant cap (100 in Zoom’s free plan vs 10 in Dialpad’s free plan) and offers several features that Dialpad doesn't, such as whiteboarding.