Have you ever been introduced to a new person only to forget their name seconds after learning it?

Throughout our lives, our brains create a rich tapestry of memories based on the sights, sounds, smells, and everything else that we experience each day. But why can you easily remember some things, like the make and model of your first car, but not others, like what you had for breakfast last week?

Your memory is basically broken up into three parts: sensory memory, short-term memory, and long-term memory. The sensory memory is like a small holding tank for split-second information from your senses. So, if you’ve ever looked at the sun and then closed your eyes, that after-image is a piece of sensory memory. This only lasts for an instant because your brain is constantly trying to process everything you are experiencing.

If someone on the street gives you directions to the post office, then you are engaging your short-term memory. Short-term memory, sometimes known as working memory, is the information that is in your consciousness right now. The duration of short-term memory has been said to be around ten to fifteen seconds long and the capacity of information is about seven items. Different techniques below can help extend that period and eventually help move pieces into long-term memory.

Long-term memory is like the hard-drive of your computer or savings account and it stores facts, observations, and stories that you experience in life. Major events, anomalies, or highly emotional experiences are usually remembered a lot stronger and longer because they are like breaks from regular workings of your brain’s chemistry. Then, the more that you recall these experiences, the more neuron paths are formed to help strengthen these memories.

Scientists don’t know how much storage capacity your brain has for memory because they haven’t figured out a good way to quantify it. However, what we do know is that we forget. A lot. Luckily there are easy fifteen ways to improve your memory.

How to Improve Your Memory 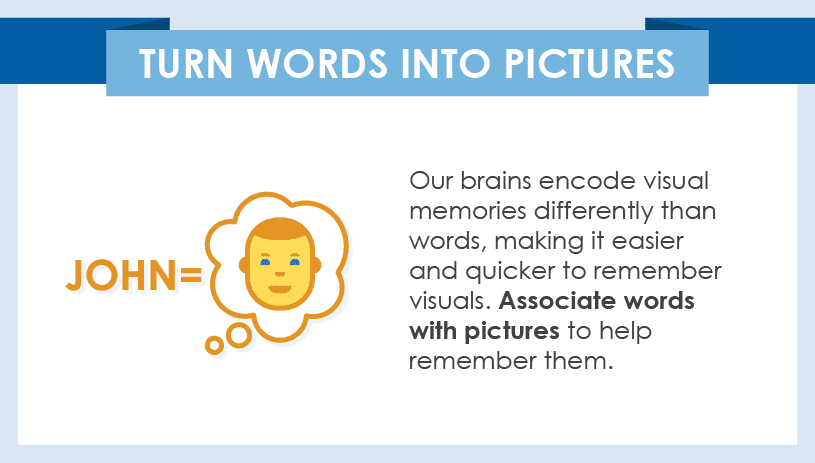 Science has told us that we remember visual cues better than words. Scientists have seen more activity in the brain regions related to memory when we “encode” these visual memories than when we “encode” words. This is why slide decks work so well with pictures. You are more likely to recall a picture of a beach than just the word beach. In fact, studies have shown people recalling up to 2,000 photos with up to 90% accuracy. 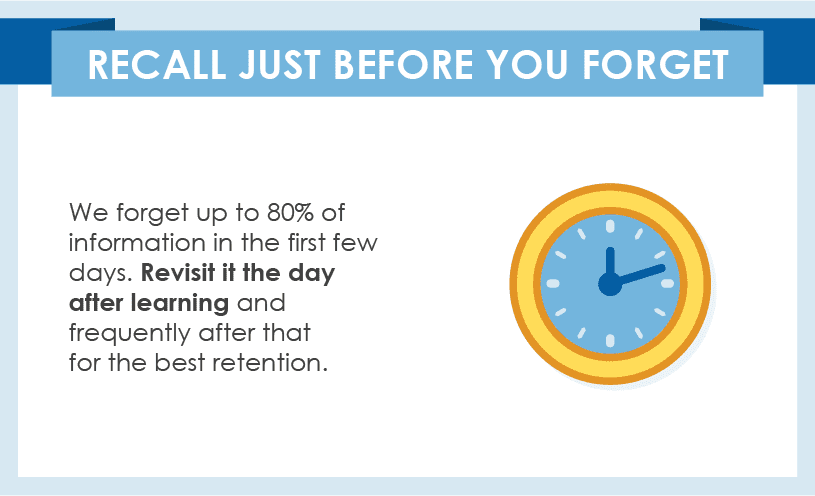 Each type of information has a time limit in your memory. It will stay with you for a time and then quickly drop off. This time period varies between hours and days depending on the type of information and how complex it is. Obviously the more complex the information, the harder the brain has to work to retain it. The key is review the information again just before it drops off. This memory trend is what’s known as a curve of exponential decay. Revisiting information you’ve just learned is the best time to train your brain to remember it. 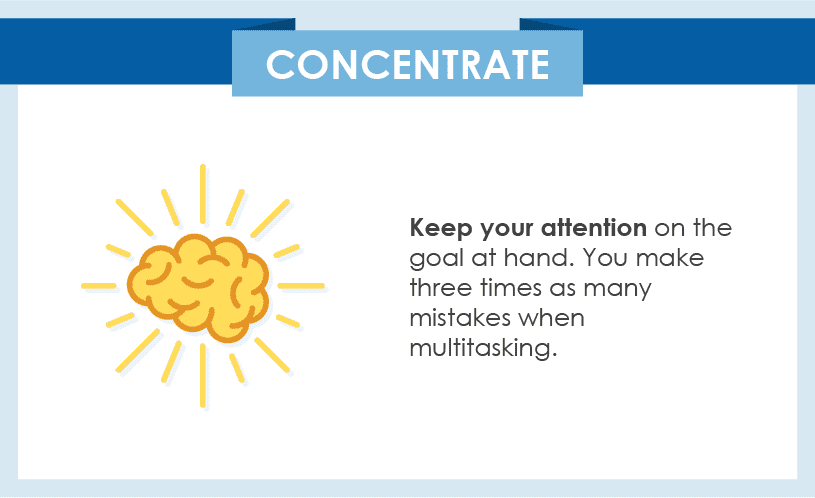 Today’s world is full of distractions. Try to keep your attention on the goal at hand. Studies have shown that when you multitask, it’s like splitting your brain’s functioning power into smaller parts. You actually make three times as many mistakes if you brain is given two goals at the same time. When learning a new skill or trying to remember a new sales pitch, try to set up a place that is free of distraction so that you can focus on learning. If you are in a meeting, avoid the temptation to check your email while listening to your colleagues or boss speak. 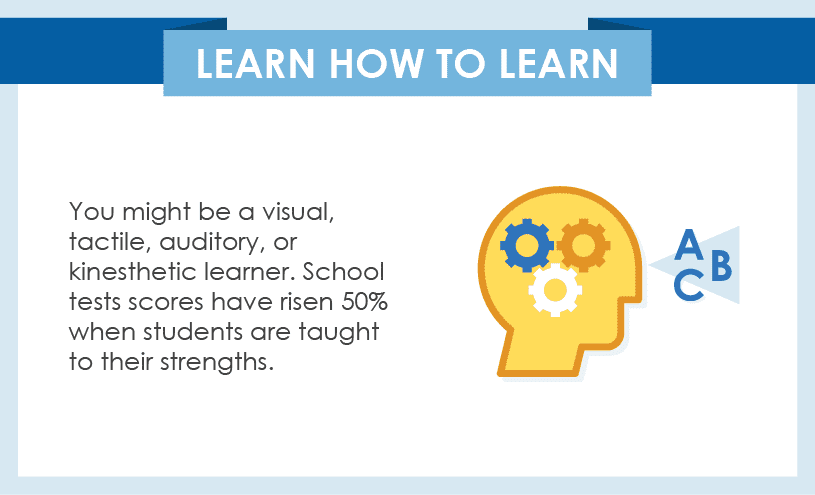 There are four main types of learners: visual, auditory, tactile (or reading/writing), and kinesthetic. Visual learners prefer visuals information for learning. Auditory learn better hearing information than reading it or seeing it. Tactile or reading/writing learners work better when they interact through touch, like writing something down.

Kinesthetic learners are all about experiential learning, like verbally reciting something. Knowing your strengths and weaknesses and leveraging these strengths can greatly impact your memory skills. You can even take a test online to figure out what type of learner you are.

Test scores at one school were seen to raise from the 20th to 70th percentile when students were taught in styles based on their strengths. 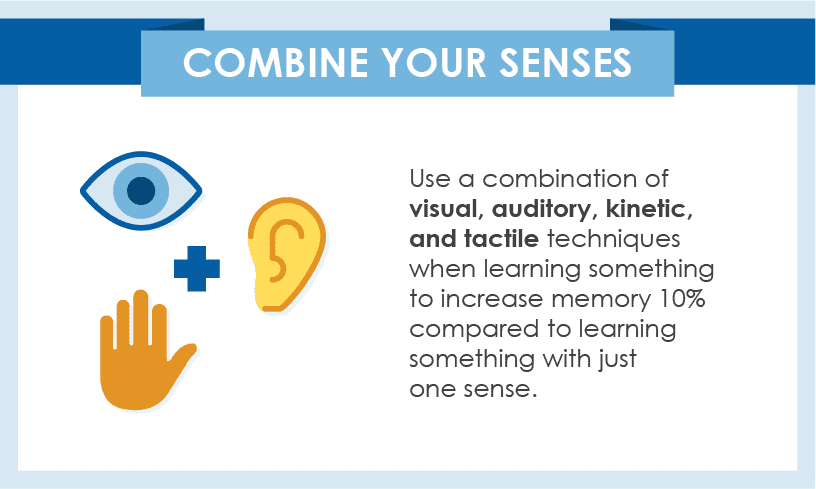 Basically, the more senses involved in storing information, the better your brain will remember it. This is not saying that you should be watching TV while memorizing facts and figures. The senses still have to be focused on the same thing. Children learn better using this VAKT method (visual, auditory, kinetic, and tactile), and it can easily be applied for adults.

When learning a new word, students will say the word, trace it with pen and paper, and write it to help improve the memory. Studies have shown that respondents are correct 10% more when taught something with multisensory techniques than only using one sense. 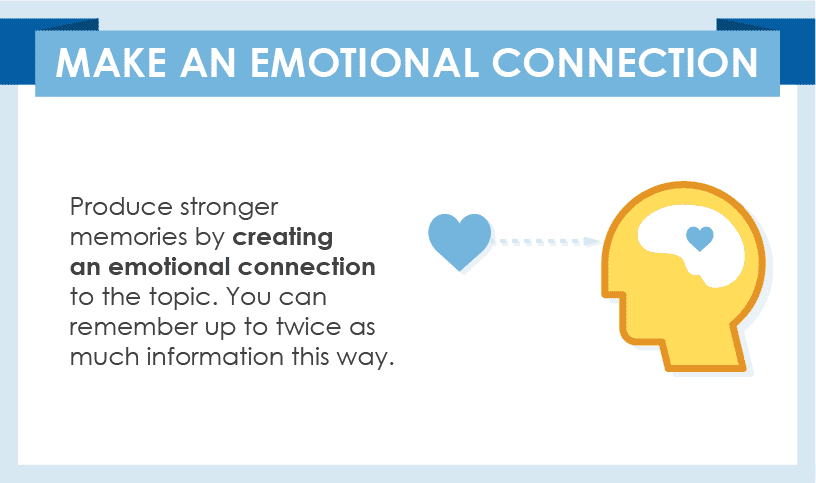 What’s the difference between a motivational speaker and a boring sales call? You probably remembered the messages from the motivational speaker long after you have forgotten about that sales call. This is because you will remember more if you are motivated to do so. Science has shown that you will create stronger memories if you have an emotional connection to what you are learning (as long as it is high priority information). Studies have shown people can remember twice as much information. 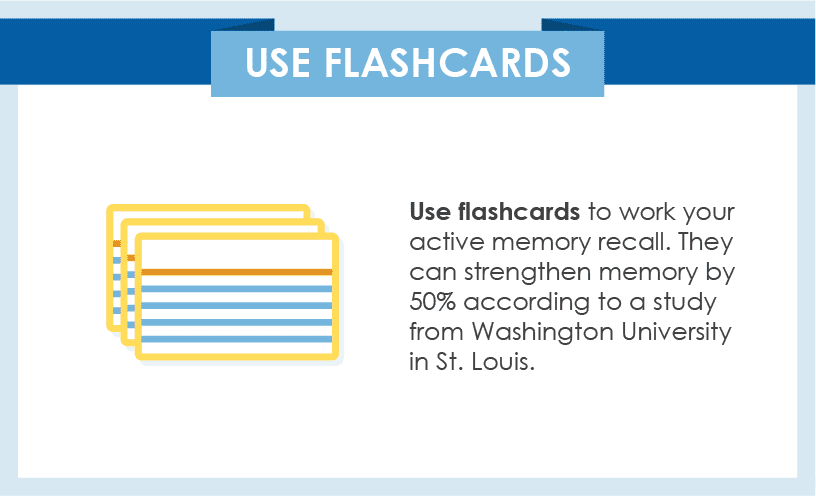 Although this might seem like something you’d do in high school, remembering information with flash cards helps with “active recall.” This means you are forcing your brain to remember something from scratch. This helps create stronger neuron connections and eventually better memory recall. Students reported being able to answer 50% more correctly when using active recall study methods, like flash cards, compared to those who didn’t. 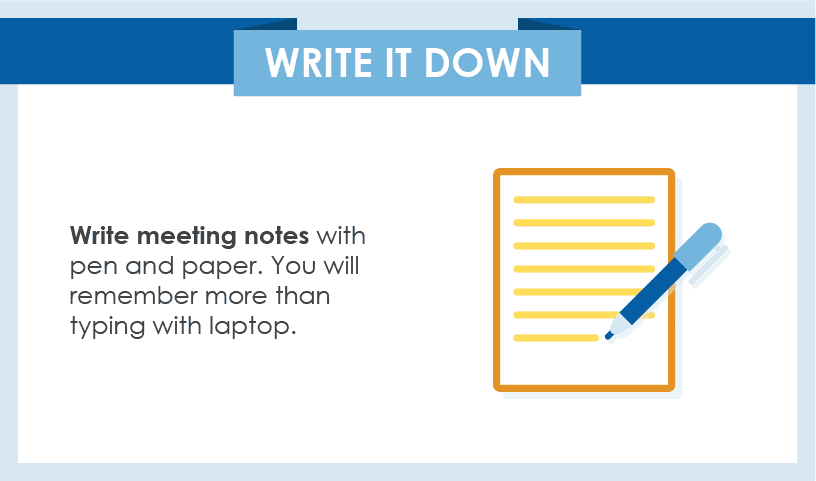 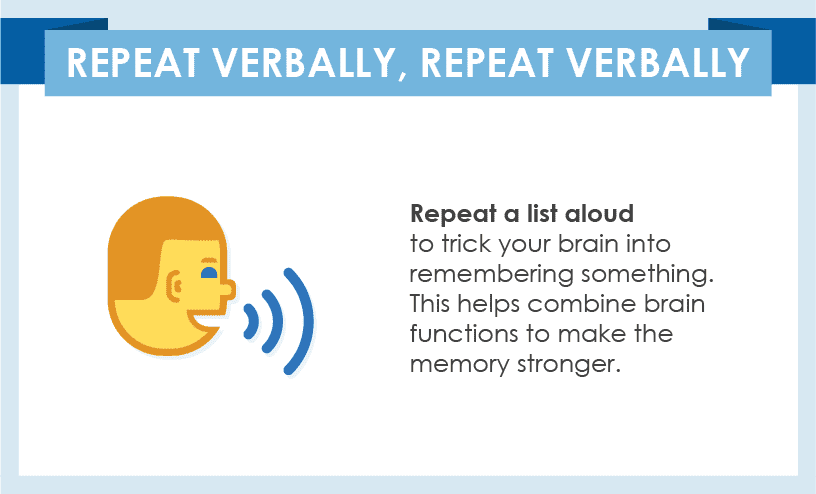 When you repeat something, it helps move the memory from working memory into long-term memory. This is called the production effect. If you are trying to memorize a list, you don’t normally say it out loud. You would probably list it in your head, or at most, whisper it so you don’t look foolish. But our brains remember the abnormalities more than the commonalities. Science has shown that when you do something weird like speak a list out loud, you will remember it better than trying to learn it silently.

Another study showed that this is even more effective when you repeat aloud to someone else in the room because of the way the brain records the communication between you and a partner. 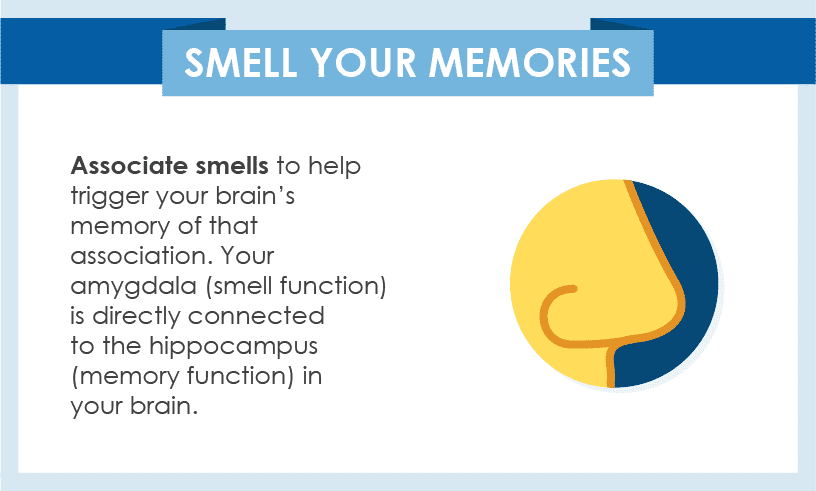 Remember when you met that person at a conference who had on too much cologne? Next time you smell that cologne, you will probably think of that person. The sense of smell is directly connected to the amygdala and the hippocampus — both are parts of the brain that deal with emotion and memory. Sitting in a meeting, try to remember the smells to help trigger your brain’s memory of that association. 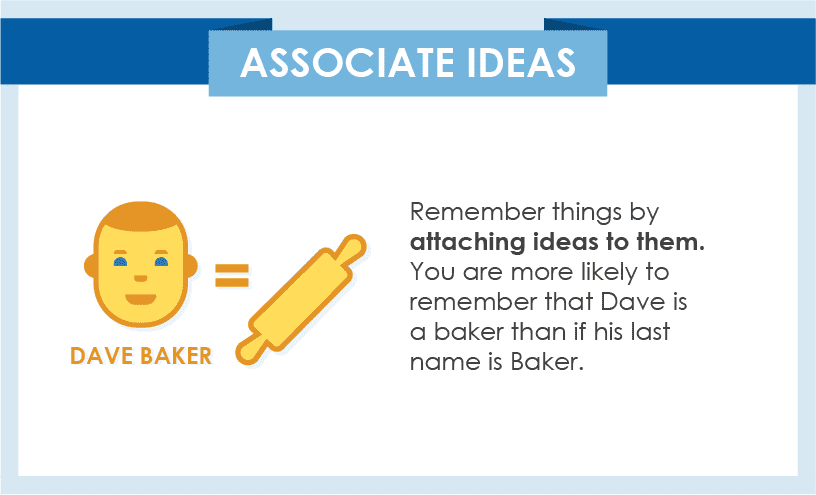 This is the Baker/baker paradox: Someone shows two people the same photo of a man. One person is told that the man is a baker. The other person is told that the man’s name is Baker. It turns out that you will remember the man’s profession more than the actual last name. When you are told the word “baker”, you easily, and more readily associate the photo with the mental images that you already have of a baker, like cake or bread. We are better at remembering things with more ideas “attached” to them. 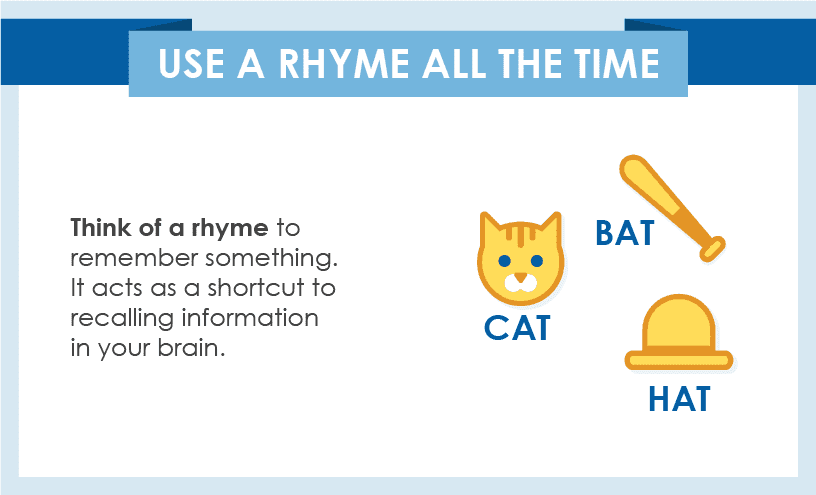 One of the reasons that nursery rhymes hold up so well is because the words are easy to remember. One experiment by cognitive scientist David Rubin shows that when two words in a ballad rhyme, students remember them better. 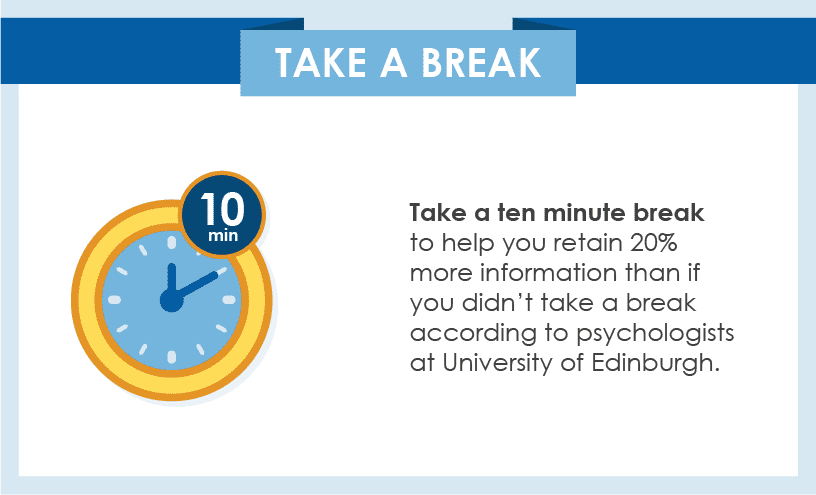 Studies have shown that when people took a ten minute break after reading something, they recalled more information a week later than those who simply moved onto the next task without taking a break. (You should note that falling asleep right after doesn’t count as a “rest.” You should still stay awake.) Scientists believe that this helps with memory consolidation and thus better retention. 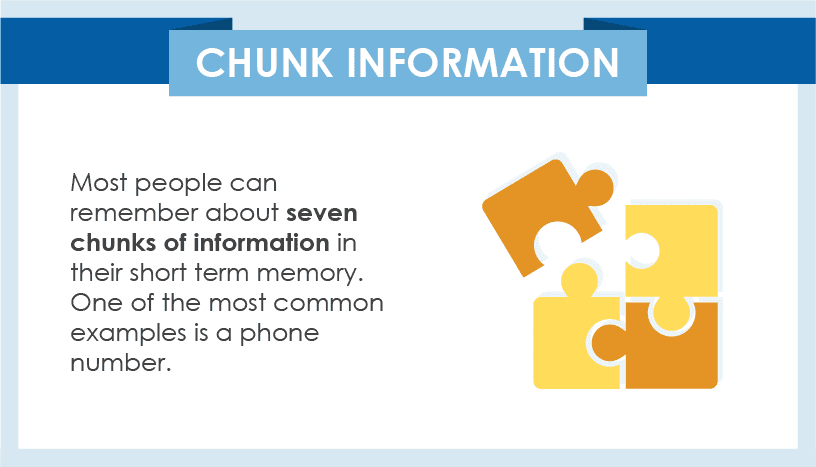 There is a reason that phone numbers are seven digits long. Most people can remember about seven chunks of information in their short term memory. A famous cognitive psychologist named George Miller found this in the 1950s. Trying to remember your bank account number? Try breaking it up into smaller groups of numbers. 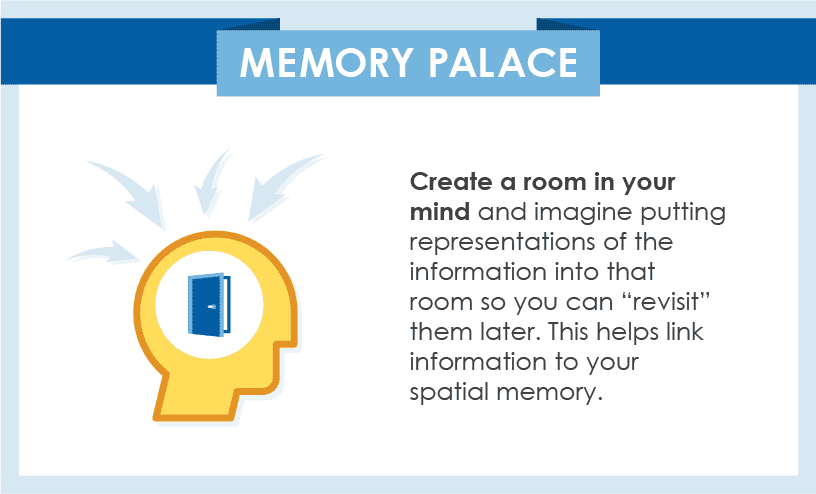 This idea of a memory palace, or “mind palace”, originates from the Greek poet Simonides of Ceos. The idea is to attach bits of information to spatial memory. So if you choose a house as your mind palace, you would imagine putting representations of the information that you want to remember into a room. So if you want to remember to buy eggs on your grocery list, you could think of putting an egg in that room. This type of thinking is what helps World Memory Champions memorize 4,140 random binary digits in half an hour or the order of 28 packs of playing cards!

Click to view infographic
Join over 100,000 professionals improving their bottom line.
We'll email you twice a month with our actionable tips, and industry trends fueling business growth, so feel free to sign up.