In September 2013, GetVoIP posed the question to tech workers “How big of a pay cut would you take in order to work from home?” to learn how receptive the tech sector was to wage reduction in order to work out of the office. Tech professionals answered that on average, they would be willing to take a 7.9% pay cut in order to telecommute.

53% of Tech Professionals Would Take a Pay Cut to Telecommute

How much would you pay to work from home every day? This is not a trick question. Many employees exchange compensation perks in lieu of pay, especially in a slow economy where businesses can’t afford to give raises. Workers who trade in their daily drive for a telecommute generally cite better work life balance, less stress and more family time as reasons for making the switch.

In response, 53% of the tech professionals we surveyed said that they would be willing to take some kind of wage reduction in order to work from home, with the average pay cut number falling at 7.9% of their salary. 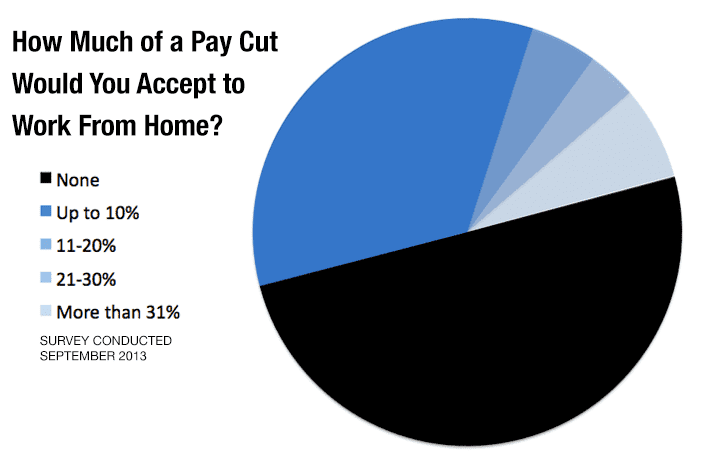 The responses were quite diverse, with a surprising number of people willing to take an extremely large paycut for the right to work from their home office. The numbers by group were as follows:

Though telecommuting appeals to a lot of people, not every career is compatible with working from home. So, this study questioned 501 technology-based employees, an industry that adjusts well to out-of-office work.

According to this study, the average pay cut of 7.9% can seem like a somewhat small number. While it might not seem like much, it can be depending on salary. For example, the average salary for tech workers is $85,619 according to a 2013 study by Dice.com. If we do the math on that, the average tech worker is willing to accept a $6,764 yearly pay cut in order to work from home. Quite the number!

Willingness to Take Salary Cut is at an All-Time High

Although telecommuting is becoming increasingly more popular among companies, employees are more willing than ever to take a pay cut in order to work from home. A 2008 study by Dice.com found that 37% of IT workers polled would accept a salary that was “slightly less” in order to work from home, defined as a 10% reduction. Three years later, a new poll from Dice found similar stats, reporting that 35% of workers would accept a 10% pay cut or lower in order to telecommute full time.

GetVoIP’s survey shows that 53% of respondents would be willing to take a pay cut of more than one percent, showing that tech workers are more willing than ever to take a lower salary in order to work from home.

This most recent survey shows that telecommuting continues to be a popular and attractive employee perk for many companies – so much so that most tech employees – 53% – would be willing to take a pay cut of some kind in order to leave the office.

The balance is important for employers, who must consider the productivity tradeoff – is a 7.9% pay cut worth it if the relative decrease in productivity is more than eight? Probably not. But if productivity can be maintained, the benefits are obvious for many tech companies.

GetVoIP surveyed 501 tech employees through Google’s Consumer Survey tool from August 30th, 2013 to September 4th, 2013. Respondents were prompted with a vetting question “Do you work in the technology field?” before they were asked the follow up, “How much of a pay cut would you accept in order to work from home?”. Google gathers responses by requesting answers in exchange for access to premium content.

Michael Ventimiglia
Michael has extensive experience in a number of fields ranging from journalism to copy and technical writing. Mike currently resides on Long Island, where he pursues his interests in the arts, more specifically music, literature, and film. Mike’s...
More posts from this author