SIP Protocol 101: What it Is and How it Works 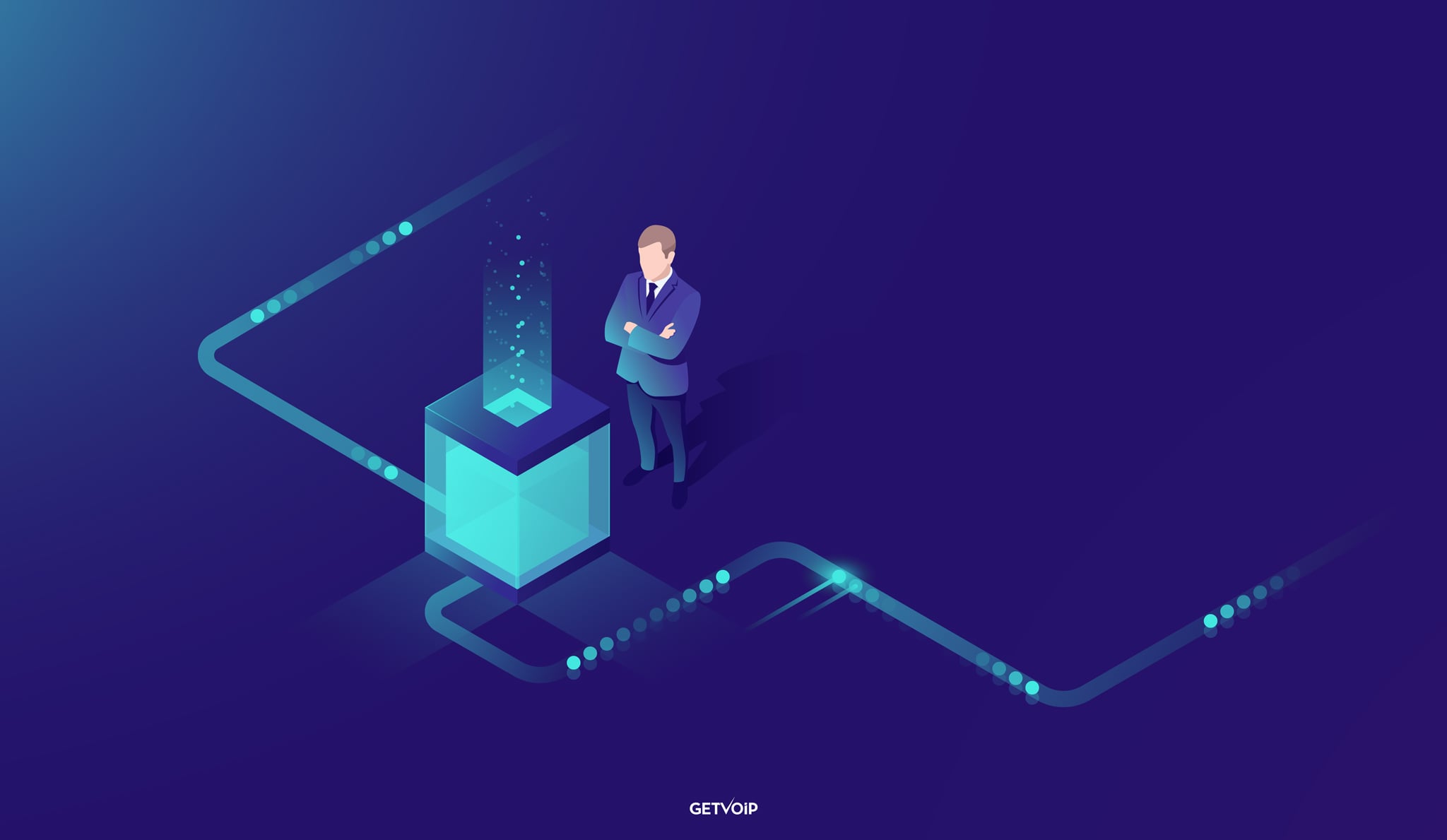 If your business uses the voice over internet protocol for its communications, there’s a good chance it’s powered by Session Initiation Protocol (SIP). Voice over IP (VoIP) tends to be the blanket term for any call made over the internet, and SIP technology is what makes many of those telephone calls possible.

In this article, we’ll cover the following sections:

SIP is defined as the application layer protocol that initiates, maintains, and terminates IP-based calls, chats and messaging. This means it handles SIP session management for audio calls, video conferences, and general various messaging applications. SIP is not the only way to power VoIP communications, but it is becoming the most prevalent way to do so.

This protocol was developed by Mark Handley, Henning Schulzrinne, Eve Schooler, and Jonathan Rosenberg in 1996. It was initially conceived as a way to improve the way IP-based calls were handled. As SIP emerged in the earlier days of the internet, it started off as a technology to support phone calls.

However, the technology was quickly adopted as a way to simplify all real-time calls. It was first used to establish multicast multimedia sessions on the now-deprecated virtual network Mbone. SIP was eventually accepted as a permanent element of the IP Multimedia Subsystem, which is a common framework for delivering IP multimedia communication services. SIP has become standardized by the Internet Engineering Task Force (IETF) through RFC 3261.

SIP trunking usually goes hand-in-hand with SIP. This allows for companies using a SIP-enabled PBX to send and receive calls over the internet. This technology helps connect legacy phone systems to the internet. SIP trunks are virtual phone lines that occupy bandwidth on a data line. That eliminates the need for traditional phone lines.

With SIP trunking, you can eliminate the costs that come with traditional phone systems that connected to the Public Switched Telephone Network (PSTN). SIP trunks also enable these businesses to scale as needed. Thanks to its original design, SIP technology can help to improve any business’s communication channels.

Where is SIP Used?

SIP is used to start and end IP-based calls or chats between individuals or teams in a variety of internet-enabled applications. These calls are started by sending data packets between specific IP endpoints, also known as SIP addresses. These endpoints coordinate with specific physical SIP-enabled devices, and those devices are what allow you to communicate with other people who are also using SIP.

Initiating a SIP call triggers an invite, which will look similar to an email. Communicating through this protocol can connect users to the internet-based methods of communication in multiple ways. That means that when you receive an invite, you’ll be able to answer it on any SIP-enabled device — whether that be your laptop or mobile device.

Those SIP requests are sent to the called party through proxy servers, which act as virtual switchboards. A SIP server transfers a message from its point of origin to another device, which starts the dialog between participants. This transmission between network endpoints is referred to as a unicast.

Here’s a breakdown of common ways to deploy SIP and how each of them works:

One of the most common uses for SIP is internet telephony As SIP is significantly cheaper than a traditional phone system, the technology offers a great alternative to other methods of connecting to the PSTN, such as PRI lines. These calls are made with one of two types of SIP-enabled phones — hardphones or softphones.

A hardphone can also be known as a deskphone or a hardware SIP phone. These phones operate like a traditional office desk phone. But they are connected to IP networks using WiFi or ethernet cables, which can transform a legacy phone system into an IP phone.

Thanks to SIP trunks, this enables them to make outbound phone calls without taking up any extra bandwidth. It’s a great option for sales and customer support teams who spent much of their day making and receiving phone calls.

Softphones, also known as Software SIP phones, are software platforms that power SIP calls on a number of devices. These applications can be installed on a desktop, laptop or mobile device, allowing you to make a call from any channel powered by the internet. Some SIP providers give users with softphones the ability to toggle calls between devices, creating a seamless user experience.

This integration means that your business should easily find a video conference calling solution that will work for your needs. As the coronavirus pandemic has forced a majority of workers across the globe to work from home, video conferencing has become a vital piece of technology for offices — so the quality of service is more important than ever.

SIP is commonly associated with voice and video calls, but it can also power instant messages. When SIP is used for these messages, it’s referred to as SIP SIMPLE, which stands for Session Initiation Protocol for Instant Messaging and Presence Leveraging Extensions.

The protocol works in one of two ways for instant messaging. There’s the paging mode, in which messages are sent as a single transaction. With session mode, a distinct communication session is initiated and users actively exchange instant messages.

Just as with SIP video and audio calls, SIP instant messages can be sent from any SIP-enabled device. As SIP effortlessly powers these methods of communication, it’s proven to be an invaluable part of any company’s repertoire of technology.

How does SIP Work in VoIP Calls? 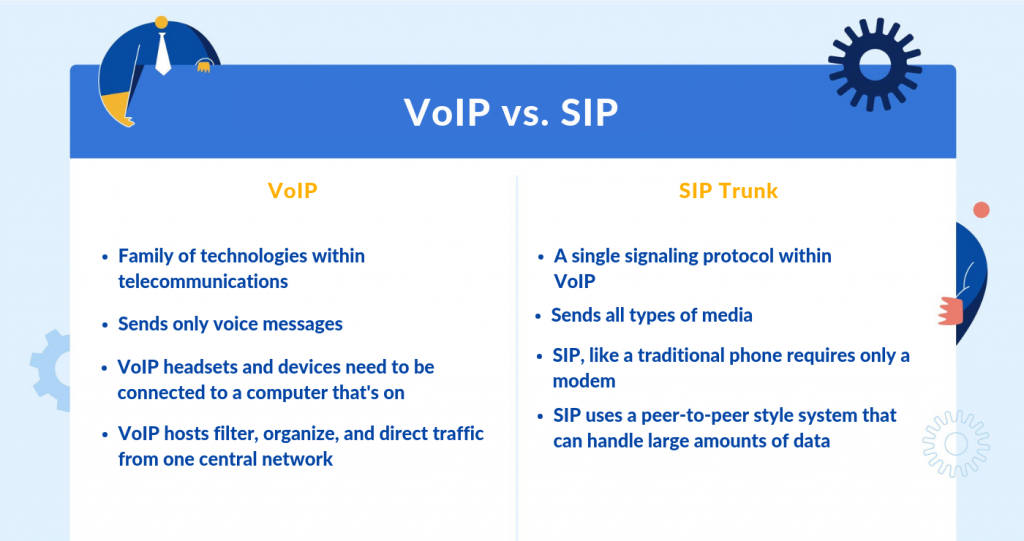 As previously mentioned, SIP is a protocol that powers many VoIP applications. But it’s important to note that they are not the same thing. Both refer to ways to initiate calls and other communications over the internet. VoIP is the technology that allows those methods of communication to happen.

But one of those calls cannot happen on its own, and that’s where SIP comes in. Multiple communication protocols need to be deployed in order for IP calls to happen. SIP happens to be one of the most prominent protocols to power those communication sessions.

SIP communicates with two or more IP endpoints to exchange messages. Codecs are used to convert the audio and/or video signals from each sender’s message and convert them to compressed digital packets of data. This allows a SIP provider to send those data packets over the internet. Codecs vary in compression sizes.

The first of these is G.711, which what is used by the PSTN. It provides top-tier voice quality but requires a higher level of bandwidth. The other compression speed is G.729. This doesn’t require quite as much bandwidth, but it doesn’t deliver the same level of voice quality.

While it’s the most prevalent protocol use to make calls happen over WiFi, SIP is not the only one involved in the process. One such protocol is the session description protocol (SDP). After SIP notifies each SIP address of the incoming call, SDP conveys specific session-related information so participants have the information they need to join that call.

As Software Advice says, the information sent in these SIP messages includes the event details, the time in which the call is taking place, and the type of media that will be used to power the call. All of this information is included in the SIP message sent to each participant in the call.

The real-time transport protocol (RTP) powers the audio data of the call. This protocol carries encoded packets of audio data to stream for real-time video and audio calls. This process isn’t directly to SIP’s protocol. Instead, it runs parallel to it.

However, this protocol does work in tandem with the RTP control protocol (RTCP). This process exchanges data between each SIP address related to the quality of the call. This data includes data packets exchanged, number of packets lost, and overall lag time. SIP providers can monitor this protocol as a way to judge the quality of service.

Data packets from the previously mentioned protocol are sent to their final destinations through separate transport layer protocols. The Transmission Control Protocol (TCP) prioritizes sending data packets in the correct order, as opposed to sending them as quickly as possible. The User Datagram Protocol (UDP) does the opposite. For this reason, UDP is considered to be the ideal protocol for these calls, as it ensures communications happen in real-time.

Conclusion: The SIP Protocol Takes Your Business Calls to the Next Level

If you’re looking to get the most out of your business phone system, a SIP-enabled platform is the way to go. This technology offers the unique ability to enhance the quality of both traditional and IP phone systems. That can provide significant benefits to any business.

Using the SIP protocol for your communications sessions eases the cost and maintenance effort that comes with a traditional phone system. A SIP-powered telephony system grows with you and can handle a large amount of data as well. Not to mention, SIP technology allows you to adapt to new channels of communication as they continue to emerge.

Cision previously reported that the global SIP market was worth $7.63 billion in 2018 and was poised to grow up to 10.7% between then and 2023. This growth is a reflection of the benefit of using the SIP protocol for your business calls. If you’re ready to make the switch, take a look at our list of the best SIP trunking providers.