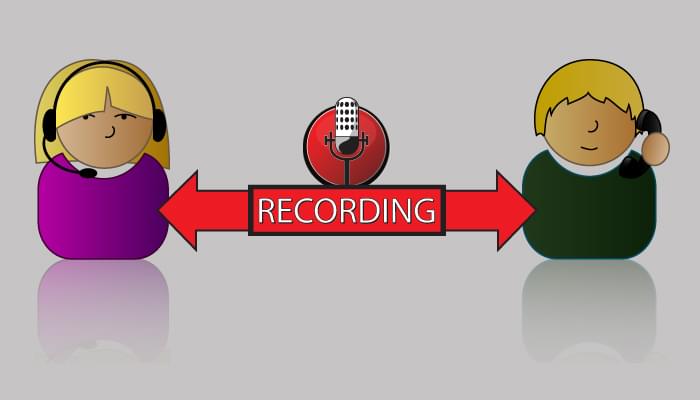 Call recording is becoming an increasingly necessary part of business operations. Laws in place today make it so that financial institutions must keep searchable records of trade information. Many businesses that have nothing to do with the finance industry are also recording calls to protect themselves and their customers. There are three major ways to record a VoIP phone call. The first is to have a hosted solution essentially do the work for you, the second is to have software record your calls with a computer, and the third is to have a hardware appliance that intercepts and copies the VoIP data.

Calls can be recorded using a few different methods. Calls can be recorded individually by activating the record function (usually by pressing the * key and a preset number) before or during a call. Call recording can also be paused this way. Calls can also be recorded with a technique called “look back,” where the entire call is recorded, even if the call recording command is sent after the call has started. It’s a great way to record conversations that you don’t know ahead of time will be important.

Once the calls are recorded, then they must be played back. Calls, like music, can be recorded in different formats, and usually converted from one format to another easily. Also like music, calls can be tagged with important information, and some information is automatically tagged, like the phone number and the time of the call.

Businesses record calls for different reasons. Banks and financial institutions are tightly regulated, and must record every transaction, as well as conversations leading up to transactions. Calls are often reviewed for training purposes. If you forget important details that are on a certain call, such as an important phone number, it helps to be able to comb through your own files.

One gigabyte of disk space adds up to about 35 hours of recording time. While that may sound like a lot for one person, obviously if you have 35 people in a call center, it adds up to only an hour. Fortunately, disk space is cheaper than ever.

1 – Hosted Call Recording: In a hosted solution, no major equipment is on your site. Instead, everything is hosted on the central office of the provider, and you connect via the web. Call recording equipment is no different. The recording hardware and recording servers are all on the provider’s site. Some hosted providers allow a gigabyte or some other amount of recording space for free, others offer recording only as a paid subscription.

2 – Software-based Call Recording: In software-based recording, recording software is on your computer or server. Software can be used to record calls not just over the phone, but also for softphones Skype, Google Talk, Google Hangouts, and so on. The software works by recording whatever goes through your computer’s sound card.

The software must be set, either through Asterisk, or in the software itself. Call recording software records at the source, but technically, there are two (or more) sources. A phone or Skype call has multiple people talking on it, and each is a source. So the software must select the source, or pick both sources, called channels. Depending on the options, the two channels can be separated into discrete left and right. The software parameters can be set to remove silences in the conversation as well. You can also select the format and quality of the final file. The greater the quality, the more space it will take up.

In some cases, one side can be louder than the other side, but there is free software that can fix that easily. The calls can be recorded in one channel, or separated into multiple channels. Generally, sound is recorded in mono, meaning only one speaker, as opposed to stereo. Stereo would require twice as much memory.

3 – Hardware/Appliance Call Recording: In an appliance based recording, a device, usually a rack-mounted appliance, is placed among the VoIP equipment. The device is connected to the web and to the other rack-mounted equipment via LAN cables. It does what’s called “port sniffing,” which means it reads and interprets data that is transferred over a specific network port. VoIP calls only transverse the firewall on specific ports for security purposes. So, the appliance sniffs the port for VoIP data and records it. Appliance devices can be small, or they can be large enough to monitor hundreds of extensions at a time. Rather than have a built-in hard drive, appliances connect to server databases that record the calls online.

VoIP call recording is different than traditional wiretapping or other methods of call recording. The fact that the call is broken up into packets and sent over the internet means it cannot be recorded using the same methods that worked for analog telephony. But there is a new generation of VoIP calling options for your personal or business use.