Free VoIP Features You’ll Never Have to Pay Extra For 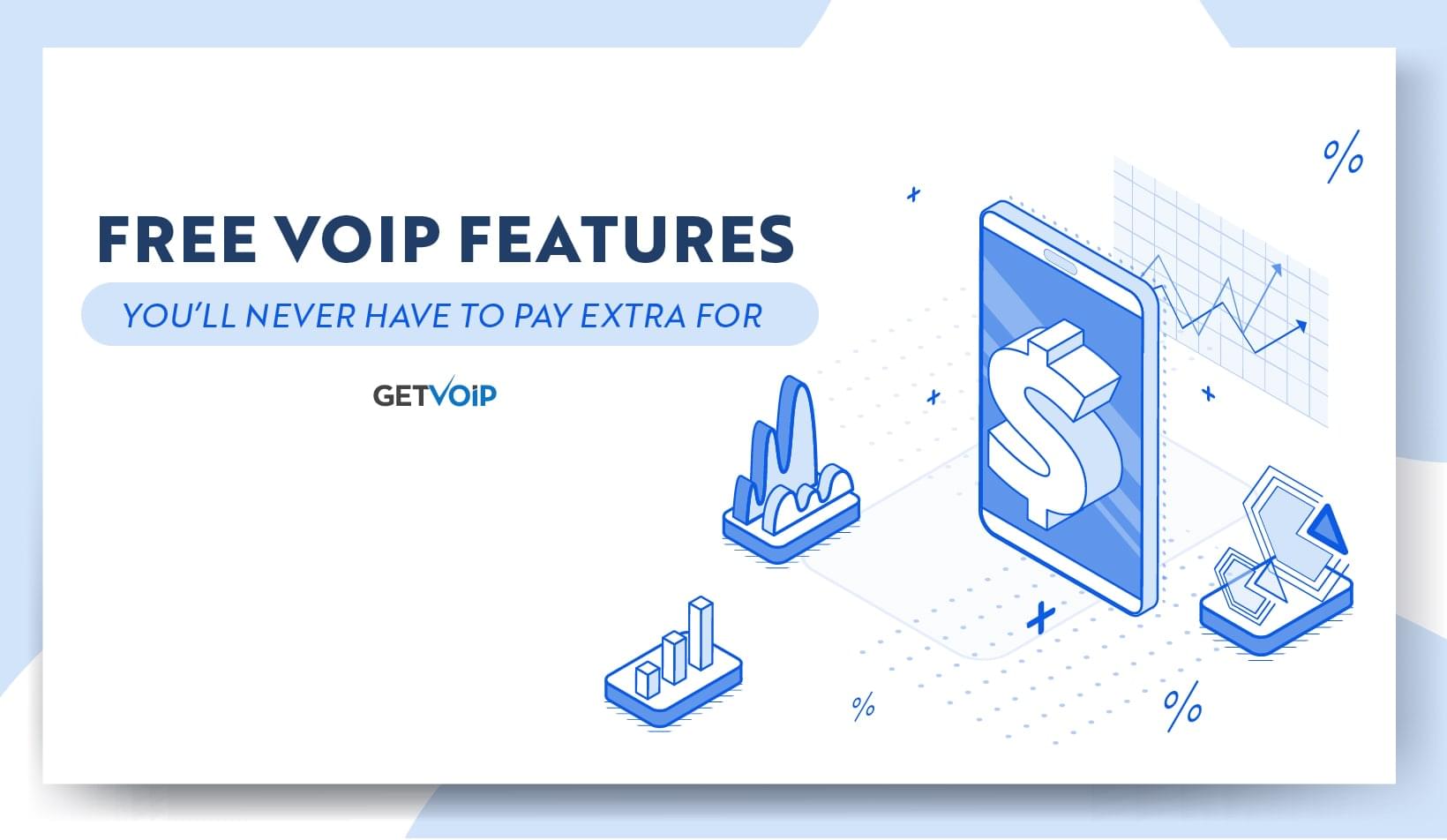 One of the things we constantly tout about VoIP for home and office is the low prices and the money you can save. But if there’s one thing better than cheap it’s free. Traditional phone carriers often make their subscribers pay extra for features we’ve come to expect. There is no “emergencies only” grade of VoIP the way there is for traditional landlines. Instead, you get dozens of features included with every plan. Nearly every VoIP provider gives the following twenty features for free with their first minute of service.

One: Caller ID
Caller ID is the ability for a phone to display the name and phone number of any inbound calls. In the past, it took a separate device to decode this information, but now most home phones have this feature built in. Caller ID has been standard in cellular phones since they first became popular. So why do landline providers make you pay extra for such an expected service?  VoIP providers never charge you for it.

Two: Call Waiting
How long has it been since you last heard a busy signal? No one possibly expects to hear one these days, but many land line providers still consider this an extra feature. Not so with VoIP. With VoIP, important calls can get through to you no matter what.

Three: Caller ID on Call Waiting
Many providers give call waiting on calls when the phone is on-hook, but once you are on the phone, you’ll simply get a beep, without telling you who is calling you. Again, VoIP has this feature free of charge with every minute of VoIP

Four: Three Concurrent Channels
With a landline phone, when there is more than one phone in the house and someone is using the line, the second person to pick up the phone will interrupt the first conversation. Three concurrent channels means that when you pick up the phone and someone is using the phone, you hear a dial tone and can call out. That’s the second channel. The third channel means that even though two people are on the phone using the same number, a third call can get through, although you’ll have to drop one of those calls to take it.

Five: A “Cloned” Line
Just to clarify the point made in the previous feature, when you have VoIP, you have multiple phones all using the same inbound and outbound phone number. Depending on the device, a residential VoIP subscriber may plug two phones in the same device, and only use one inbound phone number. In many business VoIP hosted solutions, you can get many inbound channels on the same number. OnSIP, for example, has 25 concurrent channels for every phone number.

Six: Custom Outbound Caller ID
With VoIP, you get to choose your outbound caller ID. This is a simple, yet effective business tool, or a simple courtesy as a residential caller. Most cell phones, by comparison, will tell you the location of the subscriber or simply say “wireless caller” if that phone is not in your own phone’s address book.

Seven: Do Not Disturb
Also called “DND” for short, business VoIP subscribers can press a button on their phone and have calls automatically go to voicemail, instead of ringing. But most residential VoIP subscribers also have this feature. By setting call treatments or call rules, you can have your phone not ring during certain hours of the day, or put numbers on a blacklist.

Eight: Network Failover
VoIP has a record of reliability, but it is dependent on factors like power and your Internet connection. That’s why you can set up a failover number ahead of time. The VoIP network will automatically reroute your calls to that number if calls can’t get to the VoIP Adaptor.

Nine: Online Voicemail
Once upon a time, we had answering machines, and as technology got better, we made the switch to Voice Mail, which you could call in from any phone, even when you weren’t at home. But VoIP goes one step further. Because VoIP is an online service, you can check your voice mail from your computer as well. All you have to do is log into the web portal of your VoIP provider and press an icon. Many providers also email you a copy of your voicemail.

Ten: In-Network Calling
No matter where in the world you are or where you’re calling to, when you connect within your VoIP network, you can expect it to be free. This is a great money saver if you have family separated by many miles, or for companies that do a lot of internal communication.

Eleven: Call History
This is a great feature that you can use your VoIP phone number for or check online via your web portal. You can check who you’ve called and who called you for literally hundreds of calls. It’s great if you lost an important number and you need to dig through your history to find it again.

Twelve: Call Statistics
This is similar to call history. With call statistics you can tell who you have called the most, and how much time you’ve spent on the phone. For residential customers, it can be a neat way to remind yourself of how much money you’re saving by using VoIP; for business subscribers it can be a valuable tool.

Thirteen: Block Selected Calls
Because all of your calls are on a call log, all it takes is a mouse click to block calls from a certain number. Often there are community blacklists that report annoying telemarketers. In addition, you can set it to block any call that doesn’t report caller ID.

Fourteen: QoS
Internet traffic works by breaking down data into packets and reassembling them on the other device. When certain traffic gets priority over other traffic, it’s called Quality of Service, or QoS. Although it’s ideal to have a modem, router, or other device that has QoS built in, the VoIP packets have priority headings, giving them a head start on all the other data, which means your calls won’t sound jittery or drop.

Fifteen: Mobile App
Every VoIP provider has their own rules regarding mobile apps. Some have apps for Android but not iOS, others it’s the other way around. Depending on whether you pay by the minute or get unlimited minutes, you might get billed differently. But the concept is the same regardless of what VoIP provider you have, and nearly all of them have some form of a free mobile app. With the mobile app you can make and receive calls, some of them let you receive a fax, you can also check voicemail.

Sixteen: Support
Again in this case, every VoIP provider has their own rules regarding whether you can get chat and/or phone and/or social network support, and whether you get 24/7 support. But when you have VoIP, you can count on having many ways of being helped around any technical issue, especially at the beginning. Most business VoIP providers have 24/7 phone support.

Seventeen: Add Your Own Address Book
You can augment your inbound caller ID by entering information into your web portal. The name that you enter will show up on your phone when you receive a call.

Eighteen: E-911
By federal law, all VoIP providers that connect to the PSTN must provide enhanced 911 support. With E-911, the operators get information on their screen that tells you your exact address, making it possible to make an emergency call without speaking. A word of warning, though, you must fill out E-911 information as soon as you activate your VoIP service.

Nineteen: HD Voice
Wideband audio, also called HD voice, doubles the sound quality of your calls, effectively making them sound as good as the songs on your iPod. The extra bandwidth needed for HD voice just isn’t available with PSTN lines, and it’s an included feature in every VoIP call. Please note that to get the best quality, you’ll have to both have HD voice.

Twenty: Make Calls When You Aren’t At Home/In Your Office.
With VoIP, all you have to do is take the device with you and connect it to any working LAN port and you can make calls anywhere. This is a great way to work from home, or to stay connected on a trip. In addition, there are many easy ways you can make VoIP calls through your computer or with your mobile device and connect through your VoIP provider, often for free.

With VoIP, you get more than you pay for. As this list proves, you get a lot of features. The VoIP market is very competitive, and the technology is cheaper than antiquated landlines.