What is Call Blasting & 3 Mistakes to Avoid

How are you maximizing your outbound dialing? While call center technology, like predictive dialers, increase your chances of making contact, this type of technology can be costly. According to research done by Forrester, live agent communications cost $6 to $12 per interaction. When you automate processes, you reduce this price significantly. This is why many businesses opt to use technology like call blasting – it removes the sometimes costly human element. Still, when working with a system like this, you have to be careful because missteps are not cost-effective.

What is Call Blasting?

Call blasting is a VoIP technology that allows a business to contact a large number of people instantly by sending hundreds or even thousands of messages to a preset group of numbers. By now, most people understand an email blast – you select a combined group of recipients, and your email is sent to everyone on the list. Call blasts work in a very similar way; you create a message and load in an Excel document or database program, and all the numbers in the spreadsheet are called, and the prerecorded message is played.

Call blasting is an efficient means in which to get a voice message out to a wide audience quickly. Consider this: how long would it take for your call center team to dial 1,000 phone numbers? Even with software like a predictive dialer, this can take hours to manage this call volume dependent on the size of your center. With call blast software, all the calls are made concurrently without the need for agents, so you cover a lot of ground in mere minutes.

The recipient of the call blast receives an automated message that either pushes them through an automated outbound IVR system or schedules a callback for a later time. In terms of an outbound IVR system, the blast is useful for helping customers navigate self-service options like bill pay or helping them complete customer satisfaction surveys. You even use it for appointment scheduling.

Conversely, some businesses use call blasting as a marketing tool, which is certainly problematic if misused, or at worse, illegal. Before we get into that, not every provider calls it call blasting. Here are a few alternative names for the tech:

What Does Call Blasting do for Business?

So, who benefits best from this kind of broadcasting? First, it’s critical that you understand that, based on federal law in many countries, certain phone blasts are patently illegal. Outside of these uses, how can your business utilize blasting without incurring fines?

Here’s how you can make it work:

Effectively, this is a technology used under fairly specific circumstances. If you’re in need of a system to send reminders, disseminate information, or guide your customers through specific processes, then blasting systems are very useful. You can even sidestep restrictions imposed by the DNC registry as long as your customers opt-in to receiving voice or text messages.

Despite its many uses, it’s pretty obvious that this is also a technology that can be easily abused. Being able to dial thousands of homes in a few minutes in order to sell a product or even to bill collect is something that can do more harm than good. As a result, robocalling for profit is almost always illegal in most countries. But, why is this type of telemarketing and blaster calling illegal? Let’s take a look at two situations where blasting proved to be VERY problematic.

The Case of Pierre Poutine (Canada)

In Canada, it’s perfectly legal for political candidates to use blasting to reach voters, but in 2011, voters started to receive spurious calls through voice broadcasting. As many as 40,000 voters received phone calls from someone pretending to be Elections Canada. These calls stated that the polling stations that they typically used would be unavailable and that they would have to use another. The alternative polling stations were then unusable.

This was clearly designed to fool voters and reduce voting numbers in areas of Ontario that would vote in the Canadian Federal Election. It was only discovered because the campaign of Conservative candidate Marty Burke used a call blasting service called RackNine. RackNine was also used by a “Pierre Poutine,” who made the calls on a burner phone using PayPal credit but still used the same IP address as the campaign.

The Case of Rising Eagle and JSquared Telecom

Voter suppression isn’t the only illegal use of this kind of calling, though Canada’s instance wasn’t the only time this sort of fraud happened. Call blasts were recently used by a pair of fraudsters, John Spiller and Jakob Mears. These two individuals had charges levied against them by the FCC with proposed fines being up to 225 million dollars. This is because they used a combination of call spoofing, virtual numbers, and call blasting to make more than a billion robocalls.

During these calls, they offered plans from Aetna, Blue Cross Blue Shield, Cigna, and UnitedHealth to callers, but once the messaging was over, customers were transferred to one of the duo’s contact centers. Instead of helping the customers achieve a plan with one of the previously mentioned insurers, they were presented with other plans not from those providers. The numbers used were even faked to appear as if they were coming from those providers.

This case really shines a light on the dangerous efficiency of this system; the pair made the billion calls in just the first quarter of 2019.

The legality of this kind of blasting is dependent on usage. The situations you just read about are just two cases of abuse, but both have far-reaching implications. For reasons like these, blasting for marketing or fraud is illegal in the majority of countries. For example, in England, the Information Commissioner’s Office (ICO) states:

“A person shall neither transmit, nor instigate the transmission of, communications comprising recorded matter for direct marketing purposes by means of an automated calling system…”

While there are accepted uses of the tech, fines for misuse start at around £180,000 per violation.

When used correctly, this technology can be very beneficial, but you’ll want to tread carefully. In the United States, there are strict laws protecting consumers, and one of the most important is the Telephone Consumer Protection Act (TCPA).

As we covered in our cold calling software guide, the TCPA governs the use of dialing software that marketing campaigns use to reach third-party leads. The rules of this act are ironclad, so here are a few mistakes and how to correct them so that you do not run afoul of the law.

Most companies use Excel documents and databases to store customer information. These need to be consistently updated so that you’re not accidentally calling the wrong households. Remember, even when a customer consents, they can opt-out at any time, so maintaining customer info is critical for calling campaigns.

You’ll need to consistently keep your Excel spreadsheets updated to ensure that all numbers are callable. It’s also a good idea to keep an internal “do not call” list that’s outside of the official registry. This covers you if a customer asks not to be reached again in the future.

Mistake 2: Not Getting Consent

Just because a caller is a customer doesn’t mean that they’ve given express consent to be reached for future marketing attempts. This is an easy way to score a violation. Remember, calling someone on the DNC list without express consent will net you fines as large as $43,280 per violation.

Be clear with your customers; you’ll need express, written consent to be able to reach them at home or by cell phone via voice broadcasting software.

Mistake 3: Attempting to Cover Your Tracks

You might think that it’s a good idea to simply hire a middleman center to handle your call blasts, but this is a mistake. Most countries that ban blasting to specific customers will fine the hiring company and not the firm that’s making the outreach. At best, both companies will be held liable.

Instead of chancing hiring a firm that will potentially mishandle your outreach, use a solution from a provider that has outbound IVR or call blasting features. You don’t need a massive staff for the outreach; the very nature of call blasting is to perform extended outreach with fewer agents. When bringing this kind of outreach in-house, you can be 100% sure that you’re reaching callers and staying compliant with local telecom laws.

Which providers have this kind of service? Here are three to consider as well as pros and cons for each: 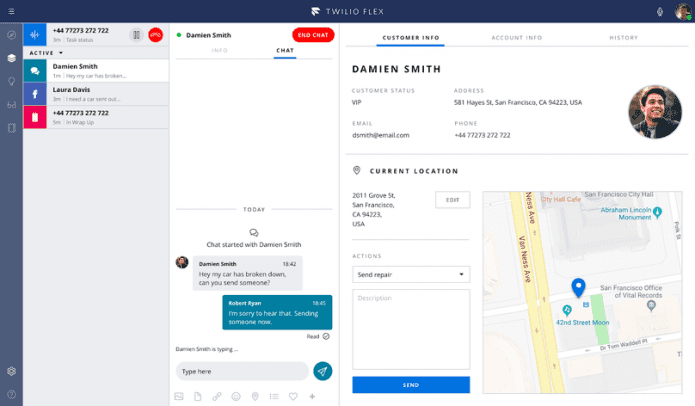 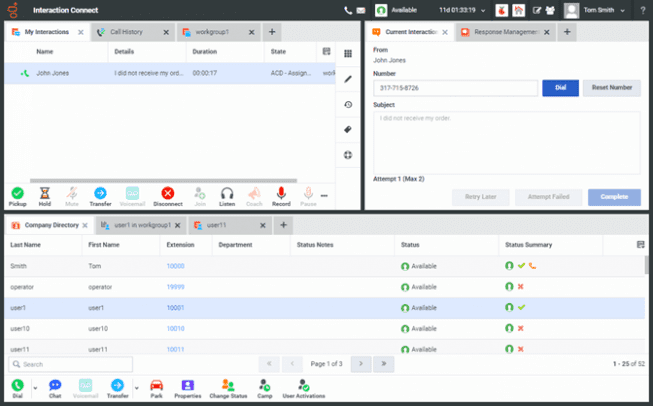 As a provider, Genesys has an extensive outbound IVR system that utilizes automated voice calls, social media posts, or SMS messages to reach customers. As we stated in our Five9 vs Genesys guide, this provider excels at bringing omnichannel communications to the contact center. You engage your customers who have opted in on their preferred platform and eventually drive these same customers to your agents. Automated suppression also lists auto-flag numbers with a history of spam complaints. 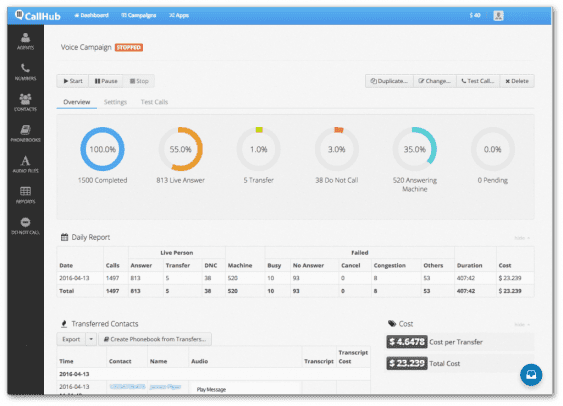 Unlike the other two providers, CallHub specializes in call blasting. With this software, you simply upload an Excel spreadsheet or a CSV file with customer data in order to begin the process. After setting up a recorded message, you then start dialing. Features like dynamic caller ID ensure that the customer sees a local number rather than the number of your call center.

Is Call Blasting Worth it for Your Business?

Whether or not call blasting is a good idea will depend on your business structure. Are you looking to keep your customer satisfied and are looking for a quick way to let them know about things like scheduling or sending important alerts? Call blasting is useful for these functions and allows you to reach thousands of contacts during a single shift.

On the other hand, if you’re looking for a system to drum up additional business by making unsolicited calls, then call blasting will likely cost you thousands, if not millions, of dollars in fines. It’s simply better to follow the rules and consider another avenue for reaching new customers.