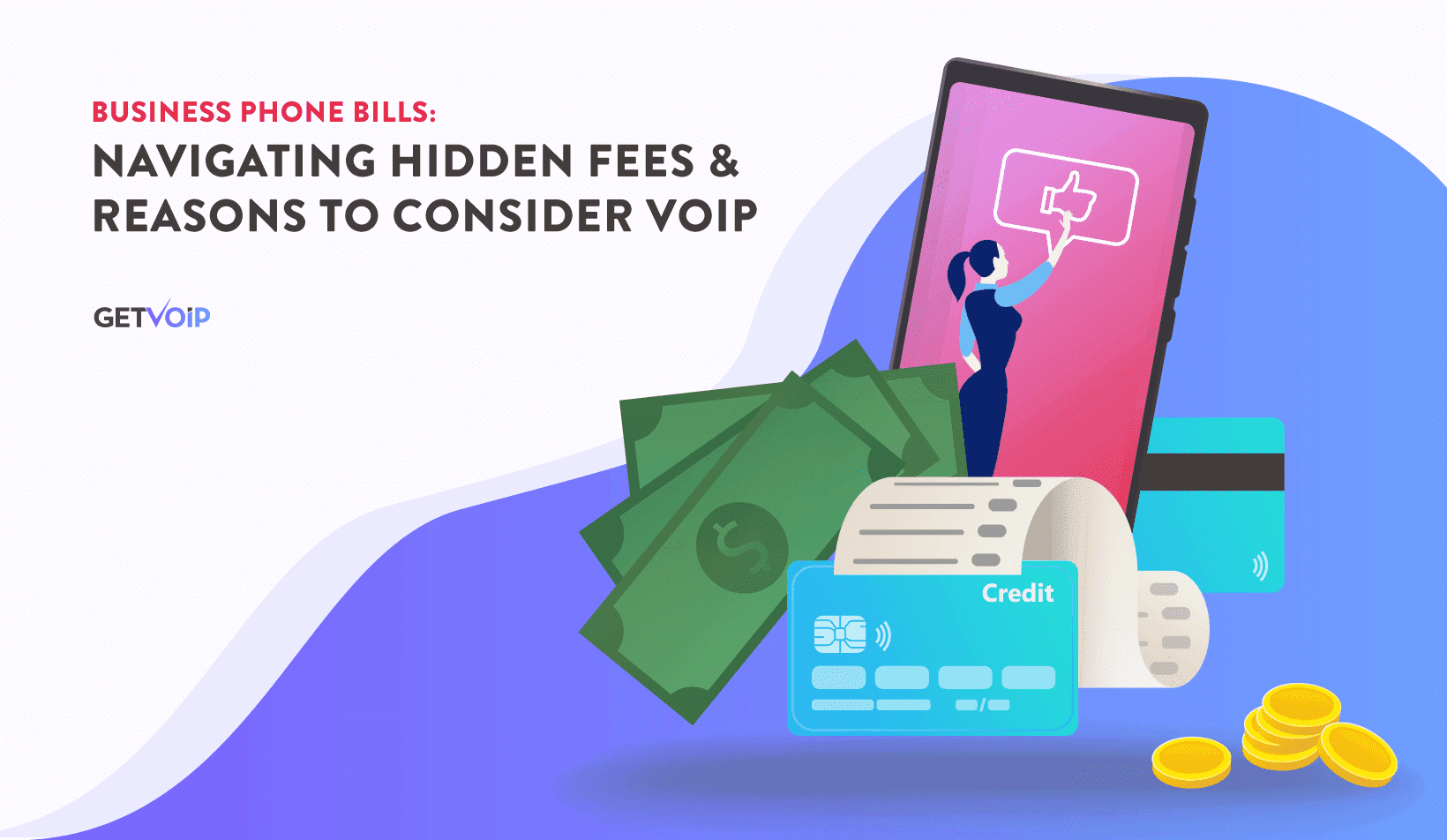 It can be easy to overlook the amount of money your business is spending on its phone service – it does need the service after all. Phone calls are the most common way that new clients first engage with a company and phones remain a go-to for customer support. Given that necessity, phone providers often feel comfortable tacking on various charges that can significantly increase the cost of your monthly business phone bill.

Some of the charges may be for services that you rarely (or never) use, while others are ambiguously named “maintenance fees” and everyone’s favorite: taxes. There’s no limit to the level of creativity that some business phone companies display when finding ways to nickel and dime their customers. Unless you’ve already carefully audited your company’s phone bill, there’s a good chance that you’re paying more than necessary.

If you’re out of touch with just how much traditional phones are costing your business, we’ve jotted down a few pointers for items that you might want to keep an eye on the next time your phone bill arrives. And if you’ve never considered trying an Internet-based VoIP provider such as Nextiva, Vonage Business Cloud or RingCentral, we’ll also cover some of the core benefits you can expect from switching to cloud-based telephony.

Items to Watch Closely or Question on Your Phone Bill

For starters, you may be able to reduce your monthly phone expenses by bundling different services into a single bill. Providers will commonly offer a discount for such packages and it may likewise reduce your company’s administrative costs by consolidating the bills into one payment. However, this also leads to a more complicated bill where providers can cram in additional charges that might otherwise not be possible with a simpler bill.

The FCC has gone as far as creating FAQ pages covering subjects such as phone bill cramming to help inform people about the habit of telephone companies making unauthorized charges. The agency notes that the more your phone bill begins to look like a credit card bill, the more you should be concerned about whether you’re paying a fair amount.

“Deception is the hallmark of cramming. Crammers often rely on confusing telephone bills to trick consumers into paying for services they did not authorize or receive, or that cost more than the consumer was led to believe… The FCC has estimated that cramming has harmed tens of millions of American households. “

You’ve probably experienced the shock of receiving your first phone bill from a new service. The phone company’s initial quote likely didn’t mention expenses from taxes, surcharges or that you’d be billed a month in advance on the first bill (providers sometimes charge from the installation date as well as the next month on the first bill).

Phone companies generally have to pay sales tax on the service so it’s not a surprise that they collect this from their customers. However, you should make sure that the percentage collected is actually in line with your local sales taxes and not inflated.

On the other hand, surcharges and other such items are entirely subjective and may provide more wiggle room for negotiating your bill. Here are some additional items that are worth keeping an eye on:

Rollover lines – These are set up so that your business can handle many calls at once. They’re most commonly used for operations to receive multiple calls at the same time, sparing your customer the dread of receiving a busy signal. However, you may not need the number of rollover lines you’re paying for, and they’re generally not cheap at $30 per line. Note that VoIP services allow you to receive as many calls as your company can answer without paying for any additional lines, and if nobody’s available to answer, VoIP packages commonly include an automated attendant, call queuing and so on.

Wire maintenance – This fee purportedly covers the cost of wiring inside your business, but when’s the last time your service provider has actually performed any semblance of maintenance on these lines? Would they even be able to provide any support in this realm? What’s more, your company may already have an arrangement with the vendor who supplied your phone hardware and that’s who you’re more likely to call if something does go wrong with your internal system. Communicate this to your phone service provider and see if they’ll drop any fees associated with so-called wire maintenance.

Long distance & toll charges – Is a bulk of your bill made up of charges associated with long distance or toll-free calls? There may not be much you can do to negotiate these fees with your telephone company, but you may be able to avoid many of the costs by making long distance calls during windows when the service is free or by handling that communication through other mediums such as email or VoIP, even if you don’t fully commit to Internet telephony for all of your calls.

Users/extensions – As mentioned, phone companies typically charge businesses per line. Tally up the lines your company actually needs and do away with the rest. This also applies to VoIP providers, who likewise commonly charge on a per user or per-device basis. Additional features may also be charged on a per-user basis. For instance, Nextiva charges $2.95 per line for transferring voicemails to text messages.

Unused features – Speaking of which, it’s not uncommon for telephone services to squeeze in charges for features that you may not be using. Call recording, for example, may not be of any use to your business yet you might be paying for it. You might also be paying for perks such as emergency roadside assistance. Also beware of “third-party” charges which might involve items that aren’t relevant to your operation.

At the same time, you should be careful about removing too many features, and perhaps even consider adding some that would boost the productivity of your employees. Part of the appeal that VoIP has for many business owners is simply the number of capabilities that come with Internet-hosted services, not to mention that such feature-packed offerings are often much cheaper than traditional telephone lines.

Why Your Business Should Consider Switching to VoIP

Given that your company is likely already paying for a broadband Internet connection and may have even built a full blown intranet, there should be minimal friction and considerable savings when switching to a VoIP service.  There isn’t any additional hardware needed except for possibly an IP phone.

Most companies charge somewhere around $20 a month for a business VoIP line that includes everything you’d expect from your standard telephone line (business voicemail greetings, call waiting, etc.) along with a long list of features that generally aren’t included in traditional phone offerings, or aren’t available at all.

For example, Nextiva’s “Office Pro Plus” plan costs $20.95 per month (with no setup fees) and includes features such as an application for computers and smartphones that provides team presence, text messaging, video calls, conferencing and more.

Aside from that app and the ability to make unlimited calls, the plan bundles in a dozen or more features such as a professionally recorded greeting, transferring voicemails to emails, HD hold music, a button or link that you can place on websites for customers to call you in a single click, and so on.

Good luck finding most of that from a conventional phone provider, and good luck negotiating a rate that is competitive with $20.95 for a similar feature set.

Automated attendants are among the biggest features that tend to comes with IP-based telephony services and can be a game changer for routing calls around your business and taking a load off your receptionist, allowing them to focus on more important tasks. VoIP systems in general allow for a greater degree of automation and customization, which translates to greater efficiency and perhaps giving customers a stronger impression of your business.

Put simply, if your telephone service isn’t providing much more than a dial tone and you’re paying more than $20 or $30 per month for that, your business is likely far better off with a VoIP package from any number of providers. Here are the five top-rated business VoIP providers according to ratings from hundreds of GetVoIP users:

The Bottom Line – VoIP May Be the Easiest Cost Savings

For all the creative ways that telephone companies bloat their bills and for all the ways you might be able to negotiate a lower rate, VoIP may be the easiest way to save money on your company’s communications. Along with simply being cheaper than traditional telephone services, cloud-based communication platforms enable a broad range of features that can have a considerable impact on operational efficiency and the overall effectiveness of a company’s ability to communicate internally as well as with customers.