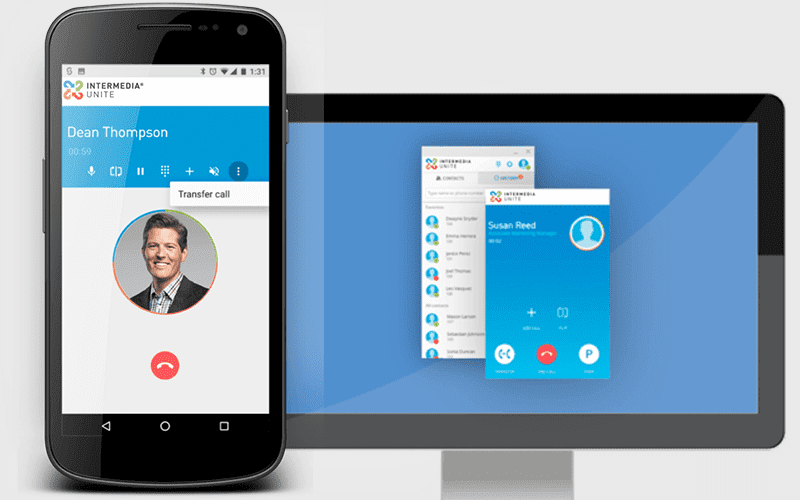 It seems as if the Unified Communications and Collaboration market is always changing and growing. Innovation is constant, new players are always emerging, and new solutions make their way onto the market it seems like every few months. The latest announcement we have heard comes from the Cloud PBX and UC provider Intermedia. Just back in September we had learned that Intermedia had acquired AnyMeeting in an effort to boost their UCaaS offerings.

Well today, we get to finally see that acquisition come to reality, with Intermedia launching their latest UCaaS solution, Intermedia Unite. By combining their existing voice and telephony technologies with newly acquired video collaboration tools, Intermedia is now able to offer a truly unique UCaaS and collaboration solution, directly aimed at the SMB market.

What Is Intermedia Unite?

By placing their focus on video collaboration, Intermedia is able to offer a solution that fills a gap in the market previously taken up by smaller third-party solutions, much like AnyMeeting. In the past, we took a close look at those video calling solutions, specifically those with screen sharing. But most solutions do not offer an entire package, they focus on video specifically. What Intermedia has done is create a true UC and Collaboration tool, with powerful video features built in as the main focus.

Michael Gold, CEO of Intermedia, explained in the announcement:

“Through our recent AnyMeeting acquisition, we’ve joined video collaboration and screen sharing with our leading Cloud PBX and workplace collaboration offerings in one extremely secure, reliable, and robust product. The result is Intermedia Unite, a truly integrated, highly mobile UCaaS platform that enables businesses to realize greater productivity and collaboration, while being even easier for partners to sell, set up, manage, and support.”

One of Intermedia’s vendor strengths is that they offer multiple solutions that all integrate together seamlessly, from Cloud PBX and SIP Trunking, to productivity and email tools, as well as security and compliance and even file sharing. Well, now Intermedia has taken all of their existing technologies, and included them into one seamless platform that also integrates with their existing product portfolio

What Does Intermedia Unite Bring to the Table?

Since Intermedia Unite is a UCaaS solution, there isn’t just one specific feature or function that platform delivers, but rather it encompasses a number of different aspects and methods of communications that make up Unified Communications.

According to their own announcement, Intermedia Unite is a true UCaaS solution, which includes:

So overall, Intermedia Unite seems to be a truly capable UCaaS platform, including some of our favorite features like screen sharing, along with the same great telephony functionality that Intermedia has become known for. On top of it all, users also gain access to 24/7 support, and can engage in an 99.999% uptime guaranteed SLA with Intermedia.

Why Enter the Crowded UCaaS Market?

So, this is a question many might be wondering when reading this announcement. After all, there already exists a multitude of different UCaaS solutions and platforms, including tools like Slack and Skype. So, why does the market need another UCaaS solution, or rather, why does Intermedia think it is worth breaking into this existing market?

Well, Intermedia actually touched on this a bit within their announcement of Unite. According to Elka Popova, VP of Digital Transformation at Frost & Sullivan, the VoIP and UCaaS market is expected to experience “double digit growth, expanding from $3.75 billion in 2016 to $14.83 billion in 2023.” Popova also went on to explain that despite a solid number of solutions already existing, “the market is relatively untapped and can support a large number of providers, each with its own diverse background and skill set.”

And I think that is exactly what Intermedia is looking to take hold of. By leveraging their latest technologies from their AnyMeeting acquisition, Intermedia Unite represents a unique option on the market, utilizing Intermedia’s background of IP telephony, with AnyMeeting’s background and skill set of video collaboration.

But looking beyond just technological capabilities, Intermedia also feels they have a strong and stable partner network capable of delivering this solution to SMBs, and along with their announcement of Unite also highlights some changes being made on that end as well.

“We believe that partners are the conduit to the SMB,” said Mark Sher, VP of Unified Communications Product and Marketing at Intermedia. “We built Intermedia Unite with an eye toward making it the easiest UCaaS solution for partners to sell, provision, install, and support. Their clients will be able to hit the ground running, with the integrated tools they need to be more effective with their customers, be more collaborative, and ultimately be more productive. In turn, partners will be able to take advantage of the high-growth UCaaS market, delivering high-quality, dependable products generating strong new revenue streams.”

And so, to help bolster this existing partner network, Intermedia has introduced new intuitive partner tools to help shorten the sales cycle, including:

Simply choose Intermedia service quantities and prices, then add other partner services or fees to create a single quote — Intermedia even calculates the taxes.

Easily make real-time system or endpoint changes, including enabling or disabling features system-wide, by group, or by individual user.

Intermedia went on to explain that these enhancements have been made in an effort to reduce the number of support calls and administrative hours necessary in order to help shorten the overall sales cycle, and enable partners to better service their clients and customers.

I always like to see when provider’s actually make use of their acquisitions, and provide real world, tangible evidence of the new assets making their way into the product portfolio. And, that’s exactly what Intermedia has done. Following their acquisition of AnyMeeting, just two quarters later, Intermedia is now offering an entirely new solution to its user base, leveraging that exact technology it absorbed in the acquisition.

I agree that there was room in the market for a video focused solution, and absolutely understand the benefits of video collaboration. In fact, screen sharing is one of our favorite under appreciated features, and can go a long way in providing a truly productive collaboration session. I’d be happy to go hands on with Intermedia Unite to see how it truly works under the hood, because I think it stands as a strong contender for a new UCaaS platform.