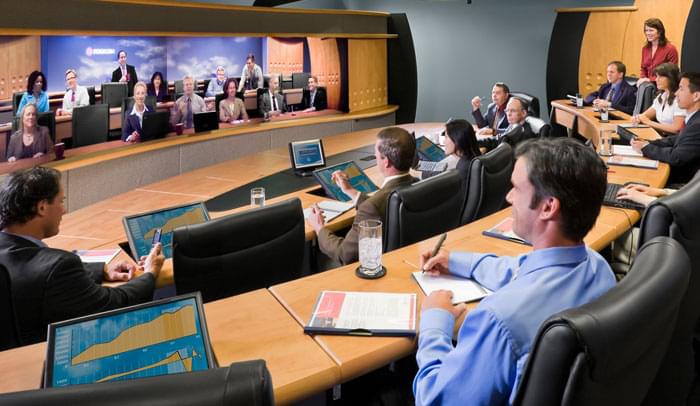 “Telepresence” and “videoconferencing” are terms that are thrown around often in the world of telecommunications. While they both deal with communicating through audio/video remotely, it might be best to point out what separates one from the other. There are intrinsic differences in the goals and deployment of each service that make them both viable solutions for a business wanting to round up its remote staff. Let’s take a look at a few of the key points of emphasis.

Environment:
Both telepresence and videoconferencing aim to provide meeting attendees the impression that they’re talking face-to-face and in the same room as each other. While videoconferencing provides ample features that can mitigate distracting local factors, telepresence has long been the best bet in making things feel most “realistic” to a certain degree. There’s no getting around talking to computer screens when there’s long-distance communication involved, but telepresence systems remove all the peripheral distractions.

For starters, they do away with the call’s control panel. In fact, some call organizers even allow remote parties to handle all of the dialing and setting-up of the calls. This ensures that the only thing the meeting attendee has to deal with is talking and responding to the person or persons on the screens in the room. This distraction-free deployment of video calls isn’t currently available for videoconferencing services.

The downside to placing such an emphasis on distraction-free calling is interoperability. Telepresence systems that have led the pack—like Cisco and Polycom—have long struggled with letting their own telepresence users play nice with other brands’ telepresence users. Videoconferencing upstarts have begun to take aim at this as mobile dependency and mobile technological advancements have ballooned over the past few years. You may not get a distraction-free environment with videoconferencing services, but you have a better shot at interoperability.

Audio/Video Quality:
Telepresence systems are the chiseled, well-dressed older brother of videoconferencing. While the latter is notorious for erratic video quality and inconsistent audio handling, the former places a premium on high-end video and audio fidelity. Again, telepresence systems are only concerned with giving the user the least amount of distractions as possible—call quality being chief among them. It’s important to note, though, that technology has definitely improved in recent years—especially over IP—and videoconferencing solutions are becoming better at handling meetings of any size.

Cost:
Companies have long poured upwards of hundreds of thousands of dollars into telepresence systems to ensure call quality and emulate the experience of attendees being in one room and talking to each other—in person. In some sense, you really are getting what you pay for. But technological advances in the last few years has meant that you don’t have to make a deal with the devil to get your company on the cutting edge of communication. Videoconferencing services cost fractions less than their telepresence brethren.  There are even several free video conferencing options, and the list of impressive standard features are ever-expanding. File sharing, interactive whiteboards, and screen sharing are among the features flaunted by modern videoconferencing services. And while videoconferencing absolutely makes you aware that you are in front of a computer and not in front of the person you’re talking to, you’re sacrificing the distraction-free environment that telepresence systems provide in favor of advanced remote collaboration.

Final Thoughts:
Telepresence systems and videoconference services employ different means to reach the same ends—to get people to communicate through audio/video remotely. While telepresence has long been the expensive standard for call quality and distraction-free call environments, the gap is being narrowed by considerably less expensive videoconferencing solutions. The option you choose really is a matter of preference, however. As the world shifts to a heavier dependence on mobile devices and file sharing, I expect that more companies will begin to make the switch to videoconferencing services—even at the expense of some call audio/video fidelity.