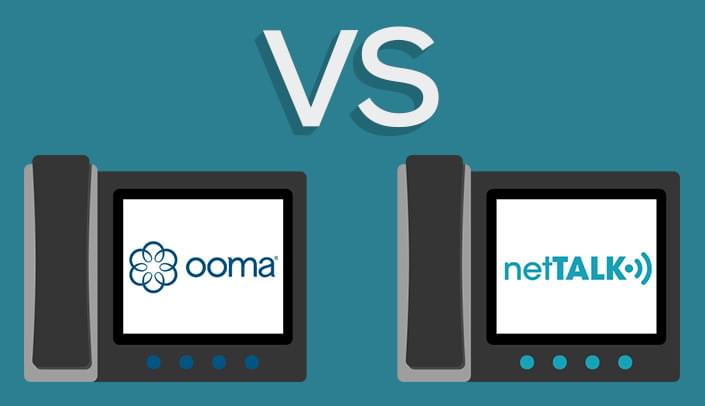 netTALK and Ooma were two of the earliest names in residential VoIP, entering the market in 2009 and 2007, respectively. Both companies follow the model of selling VoIP hardware that consumers hook up to their traditional wired or wireless phones, and offering inexpensive ongoing services with no contract. Ooma differs from many VoIP providers because it offers a free tier without a lot of bells and whistles. netTALK offers a year of free service, and a paid subscription after that.

Hardware:
Ooma sells the Telo for $129 MSRP. The Telo connects with an Ethernet jack to the modem or router, and connects to the phone. Like many analog telephone adapters, it has a bypass jack for a computer. The Telo is unique in that it has a speaker and buttons for playing voicemail, making it like an old-fashioned answering machine. Premium subscribers even have the option of playing the messages out loud as they come in, so you can screen calls, which is a neat feature, but more of a novelty now that every phone has caller ID. Ooma subscribers have the option of checking their voicemail on the Telo’s speaker, on their phone, or from the Ooma web site portal.

Ooma subscribers have the option of paid upgrades to the Ooma Telo, including a Bluetooth adapter than lets you take calls to your mobile number on your home phone; a Bluetooth/Wi-Fi adapter, which also lets the device connect to your network wirelessly rather than be chained to a router; A device called the Linx that connects wirelessly to another legacy phone; the HD2 Handset, which includes a color screen and supports HD voice; and the Safety Phone, a curious device made for senior citizens that makes it easy to dial emergency numbers. Up to four total Linx, HD2, or Safety Phones can be connected to the Telo, in addition to the two legacy phone jacks. Ooma premier subscribers can get an adapter free or certain fees waived as an introductory gift.

netTALK sells the netTALK Duo Wi-Fi, a small device that looks more like a thumb drive than a phone adapter, for $50. Like the Telo, one end connects to a traditional PSTN phone. The Duo can connect to a computer, an Ethernet port, or through Wi-Fi. There are also non-Wi-Fi Duos available for less than $50, but because connecting to Wi-Fi requires a different model rather than an upgrade, I don’t believe the few dollars you save are worth it.

Subscription Prices & Features:
Ooma Premier costs $99/year, or $9.99 month-to-month. Basic and Premier subscribers get a number of features common to VoIP, including:

Premier Subscribers get many other features, including:

Ooma also offers a mobile app for Android and iOS. Basic subscribers can make calls for $0.019/minute, or buy a bundle of 1,000 minutes for $4.99. Premier subscribers get unlimited outbound and inbound minutes to US numbers and other Ooma subscribers. The app is free for Ooma subscribers, but is not available as a standalone service.

netTALK is free for the first year, and costs $29.99/year. There is only one subscription tier for netTALK, and customers get the following features:

netTALK has a free mobile app for Android, iOS, and Kindle. Subscribers can use it to make unlimited outbound US calls, but cannot receive inbound calls. They also have a PC application that subscribers can use to make video or audio calls. Surprisingly, this application is not Mac compatible.

netTALK also allows for SMS texting, something that Ooma does not offer. Ooma Premier subscribers can get  voicemail transcription, also called Voice-to-Text, for an additional $4.99/mo, a feature that netTALK does not support natively.

International Calls:
netTALK has two international calling tiers. Subscribers can get unlimited calls to Mexico and Puerto Rico for $70/year. The second tier expands to 60 countries, including many mobile numbers. If you’d rather pay by the minute, you can do that without a subscription. All calls to Canada are included in the basic plan. In-Network calls are free.

Ooma offers both Basic and Premium subscribers the option of the World Plan, which offers unlimited calls to 61 countries. You may also pay per minute without an international subscription, but you will be charged a $0.039 connection fee per call. In-Network calls are free.

Customer Support:
In addition to 24-hour email tickets, netTALK has live chat on its website Monday-Friday from 10-4 ET. They have phone support with the same hours, but they don’t make it easy for you. Way at the bottom of their support page, they have a corporate address and phone number, but it’s right below the section for business partners. So, it looks at first glance that the number is only for people looking to partner with netTALK. I called the number, and you can call customer support at extension 2. According to GetHuman.com, a web site that rates customer service numbers, the average wait time was over 40 minutes, with a rating of one star out of five.

Getting Ooma’s customer support was much easier. A quick Google search puts the phone number right at the top, even before the search results. Ooma offers live customer support Monday-Friday from 5-5 PT and 8-5 PT on weekends. Live chat is available 24/7.

Portability:
One category where netTALK wins is portability. Both the Ooma Telo and netTALK Duo are portable, and will work with any wired Internet connection. The Duo has built-in Wi-Fi capabilities, which is a $50 upgrade for the Ooma. The Duo is small and compact, and will easily fit inside a suitcase, a backpack, or even your pocket. The Telo is small, but has a clunky shape when compared to the Duo. Note that both devices require a traditional wired or wireless phone, and do not function as a speakerphone. For the best portability, you can get a mini phone kit available at retail stores.

Additional Fees & Terms:
Number porting costs $40 for Ooma, but Premier subscribers can get that fee waived as an introductory gift. netTALK offers US number porting for $19.95, or Canadian numbers for $29.95. If you wish to get a new number rather than keep your own, the new number is free with both providers.

Both Ooma and netTALK offer a 30-day money back guarantee. NetTALK will accept returns 31-60 days late for a 25% restocking fee, but will not refund any money after 60 days. Additionally, netTALK will charge a 25% cancellation fee, or up to 50% between 31-60 days. The remainder of the plan amount charged will be given in the form of an international call credit to be used in accordance with netTALK Terms of Service. Ooma will give you a refund, minus the cost of return shipping, for up to 30 days. If you cancel the service, you will not be refunded for the unused portion of the term.

Both netTALK and Ooma charge a small amount for Government fees and taxes, which are determined in large part by what state or province you live in.

The Final Bell:
It says something that a Google search for “netTALK support” has the BBB complaint about the bad service on the first results page, whereas a search for Ooma lists the customer service number. netTALK also has some pretty odious return policies. But, assuming everything works as advertised, can it match up to Ooma? Over two years, a subscription to Ooma Premier will cost you $327, while two years with netTALK will be only $80. Similarly, an international plan is $120 per year with netTALK, compared to $216 for Ooma. In addition, the app for netTALK works on Kindle. There’s no question that netTALK is very competitive.

But, for me personally, I’ve been following Ooma for a long time. I can tell, even since the last time I compared them to another provider, that they are continuing to add more customer service, more gadgets, and more features. This is a company that is always moving forward. netTALK hasn’t made any headlines since 2012, with their introduction of their then-new Wi-Fi adapter. To me, netTALK seems more like an also-ran than an innovator. Ooma continues to win over its subscribers to incentivize them to give them more business. netTALK is a clear winner on price, but to me, how well you treat your customers matters more.