Viber vs. WhatsApp: Which App Does More? 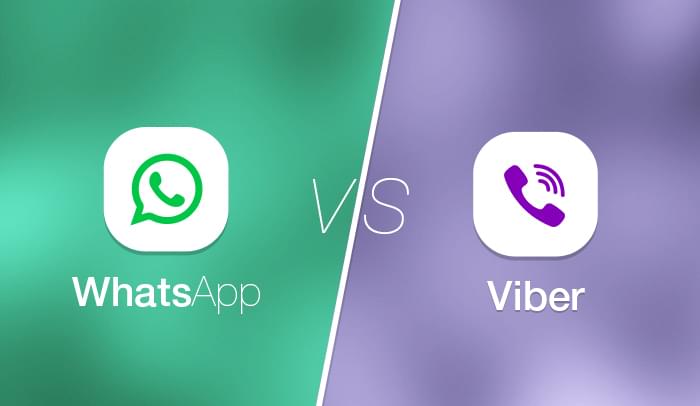 Communication apps are a dime a dozen nowadays. There are plenty to choose from, each offering a different set of bells and whistles that make the user experience unique. Among the most popular of today’s communication and mobile messaging apps are Viber and WhatsApp. While they share some of the same standard features for messaging, they’re both fundamentally distinct from each other.

To help you decide which messaging app is best for you, we’re looking a little closer at what both of these apps provide. Here’s what we’ve come up with.

Viber and WhatsApp are free for users that wish to message other users with that app. Viber adds free VoIP calling to other Viber users—something WhatsApp doesn’t offer. After one year, WhatsApp users must extend their subscriptions for a minimum of $.99 for one year in order to keep using the service. We’ll get to the features that make each app distinct from each other soon enough, but in terms of pricing, Viber and WhatsApp give you bang for the buck—they just provide different sets of features.

Both Viber and WhatsApp are found on the most popular mobile operating systems on the market. But Viber takes the cake here because of its Windows and Mac apps, giving users the option to really have access to their app anywhere. You can even switch a call from mobile to PC and back to mobile—if you’re feeling especially adventurous.

In terms of usability, both apps work almost intuitively. Almost everything about your account or app experience can be taken care of with a visit to the app settings. There, you can go change your profile photo, change your privacy settings, backup your messages, and even read through the fine print and legalese. A killer feature here could be emjoi options—which is incredibly important for people that are more expressive through smileys and emoticons than through plain, old-fashioned words. And if you fall into that category, WhatsApp might be the best choice because they have a more robust emoji library.

But, if you just want to be able to use the app in as many instances as you can dream of, this is where Viber and WhatsApp diverge. If voice communication matters to you, this is an easy choice. Viber is better equipped for users that demand voice communication options. While WhatsApp counters with their voice recording feature, it’s not like Viber’s experience of being in a VoIP call with another user.

Security:
By default, when you use WhatsApp for the first time with a valid phone number, it uses your phone’s contact list to find which of them already have WhatsApp installed. From there, you immediately have their WhatsApp contact card—and they have yours as well. This can be disabled in settings once you log in, however. WhatsApp’s recent acquisition by Facebook might make some users second-guess tinkering with this app, considering Facebook’s track record of privacy mismanagement. But WhatsApp does a pretty good job of organizing blocked users and limiting your online visibility if you wish to do so—because there are instances when you wouldn’t want everybody to know you’re online, after all. These options are all in the app’s settings.

Viber also uses a valid phone number to register its app. Then it syncs your phone contacts to the app’s contact list when you log in for the first time. One thing worth noting that Viber does is that they use Google Analytics to collect data from its users and how they operate the app and how it stores data. If you want to turn off this feature, jus head to the app’s settings.

With regards to message encryption, WhatsApp has dealt with it better. All WhatsApp communication between a mobile device and their server is encrypted. For Viber, on the other hand, encryption has been a touchy subject… but the tides are beginning to change. As of April 2014, Viber’s Android app has added encryption to video clips, audio clips, and location data so that the data can’t be spied on as easily as before. (It’s currently working on its other apps, too.) But some of the old unencrypted data still exists in Viber’s Amazon Web Services repository—and can be accessed without complex authorization— and that might worry some users. It’s good to know that Viber is making encryption a priority now, though.

Neither Viber nor WhatsApp blows the other out of the water here, so this category is close to call. But, since WhatsApp has already been an encryption stalwart here, they get the slight edge.

The Final Word:
Viber and WhatsApp both give you a unique communication app, full of great features. But Viber is a robust VoIP communication app that’s available across all the major mobile and PC platforms. WhatsApp, on the other hand, offers all the bells and whistles except for voice calling; the app is only for mobile.

In terms of what you get and what you’re paying for—even though you’re not going to pay an arm and a leg for either app—I believe Viber is the best choice you can make. Its levels of encryption still need to catch up to what WhatsApp has already been wheeling out for years, but it’s not so far behind in that category. With Viber, you’ve got the versatility to use it anywhere you are and you can make actual phone calls with it—and the developers are constantly adding security components to it. Not bad at all for a free app.