5 Career Lessons From Game of Thrones 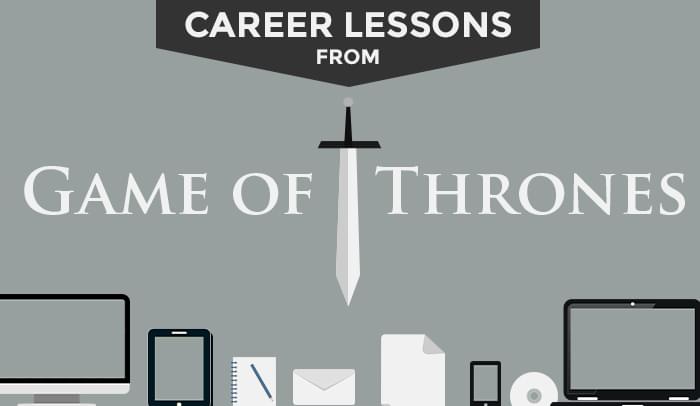 HBO’s “Game of Thrones” is a cultural phenomenon. You can’t go into a Starbucks anymore without seeing two people in the corner, sipping their java and yapping about how life would be if they could have pet direwolves. Maybe I’m exaggerating a bit. But the truth is that the show has pervaded our social consciousness in recent years, attracting more and more viewers as the seasons progress.

Even though the show takes place in a fantasy world filled with spectacle and dragons and direwolves and wildlings, if you take a step back, there’s a lot to glean from the human element of the characters on the show. They are each wired uniquely and driven to do the things that matter to them. Looking at it from another angle, there are 5 things I believe you can take to heart from the show that can aid you in your career journey… Oh, and don’t worry. I’ll try not to reveal too much from recent plot lines, but do be warned that there are spoilers below.

In the show’s first season, Robert Baratheon is the ruler of the Seven Kingdoms. But he eventually becomes complacent and squanders away his potential for even more. While complacency could be a good point to harp on, it’s his inability to pay attention to details that’s most striking to me. In the “Game of Thrones” universe, the hair color of your children quite often reveals their parentage. Robert should have had red flags going up when his son—and heir to the throne—Joffrey had hair color that didn’t match his own. Robert didn’t notice—or he didn’t really address it. It led to his death and the violent rule of his twisted illegitimate son.

Ok, so you might have more to pay attention to than what color your hair is. But it’s important to not underestimate the little things in your professional life. Even the most menial tasks can be precursors to more important events. If you treat each email and task and delegation with the belief that no single detail is an insignificant one, you’ll be on the right track.

Arya Stark has had quite a run on “Game of Thrones” so far. And I mean that in a literal sense. She’s always running to stay alive, avoid detection, and make the most of her situation. (Watching your father get executed can do that to you.) Driven by revenge but knowing she needs to stay alive to accomplish her goals, Arya spends her time on the run, utilizing her skills in the variety of circumstances she comes across. Warrior, thief, cupbearer. You name it, she’s done it. And she’s managed to survive.

Like Arya, always remember to make the most of every situation. Granted, you might not have to deal with witnessing your father’s execution at your 9-to-5 gig, but there are often situations that arise that are out of your control. New roles, new projects, new challenges. No matter where you are, make sure to utilize the skills you have that you can bring to the table. It’ll take you onto newer and fresher responsibilities.

Without giving away too much about Daenerys, just understand that she has risen through the ranks to become one of the most powerful characters on the show. Sure, she’s had some luck along the way—being betrothed to a Dothraki khal can help your career trajectory a bit—but the one thing that’s defined her growth on the show has been the fact that she’s not averse to listening to the counsel of others. Not only does she seek out help from her lowly servant Doreah, but she also entrusts the aid of valuable minds like Ser Jorah’s.  (Not everybody is trustworthy, but that’s a different story altogether.) She understands that they all have something valuable to offer her—especially as she learns the ropes of being a Dothraki khaleesi and plans on taking back her family’s throne in Westeros.

The takeaway here is that it’s important to always value the input from the people around you, filtering out the fluff. Even CEOs and people in leadership have people advising them, so don’t ever assume that success means you never have to listen to people again. If anything, being a “good listener” is a career you should never retire from.

Viserys Targaryen makes a critical mistake in the first season of “Game of Thrones” and it ends up costing him his life. He arranges his sister Daenerys’ marriage to the Dothraki Khal Drogo in exchange for the khal’s aid in retaking the Iron Throne—the one from which his father had ruled many years ago. But he forgot one critical little thing: to establish parameters for the khal’s partnership. Sure, Viserys got the khal to agree to help… but Viserys just didn’t establish when the khal would help. Viserys relied on an assumption and his business arrangement didn’t survive. Needless to say, he didn’t either.

The moral of the story here is that you should always keep track of what happens at work. Keep those receipts and monitor your calendar feverishly; it’ll help you long-term. If you’re in charge of a project, set hard deadlines and stay on top of the calendar, because assuming work will get done isn’t a professional way to handle delegation. Instead of expecting things to work out in due time, set realistic parameters for projects and work hard to see them get done.

Whatever you do, don’t be like Joffrey Baratheon. He is the young ticking-time-bomb-of-a-ruler that forces everybody to walk on eggshells around him. He doesn’t honor many promises and executes people because they look at him the wrong way. It doesn’t take a saint to realize this isn’t the most pleasant way to lead any group of people.

If you’re a leader or have aspirations to be one some day, understand that you don’t have to be a maniacal tyrant to get people to listen to you. Instead, try leading by example. Be vocal, but understanding. Take on roles other people might not want to take. Be willing to take the blame for your failures if you are willing to also take credit for successes. Better yet, deflect credit to the rest of your teammates for a job well done. Whatever you do, don’t be like Joffrey.

If you’re on the fence about how to position yourself for professional success, take these tips from “Game of Thrones”. Past all the blood, lust, scandal, and mystery of the show, there’s a resonating truth that abounds: true success is earned. Hopefully, that’s an adage that will stick for you, too.