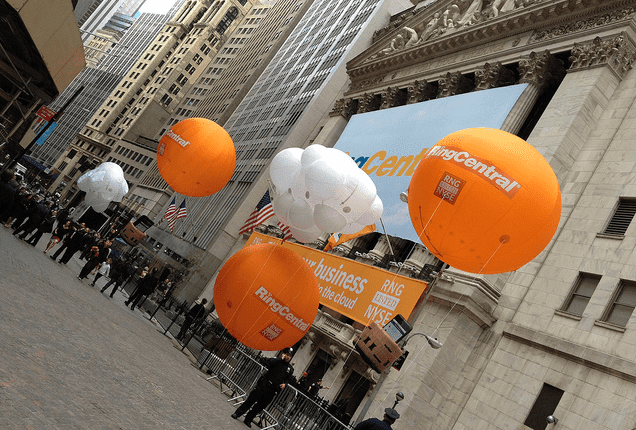 RingCentral, one of the top names in hosted PBX and business telephone solutions, announced recently that they are expanding their offerings to enterprise customers. Specifically, they have a more powerful platform for those companies that can afford the features. The new enterprise platform is mobile-centric, offering telepresence-like features on both mobile devices and computers. The new feature set reflects the ever-changing landscape of VoIP, and highlights RingCentral’s need to continue to improve if they want to stay on top.

Fortune 500-Style Meetings In Your Hands
The new enterprise feature set’s biggest highlight is the HD conferences. The RingCentral conference allows up to 25 members in a single teleconference with HD video, and software that automatically highlights the person speaking. It’s like Google Hangouts but at a professional level .The participants in such a call can be audio-only, mobile, or a computer. In other words, any platform is compatible with this feature. During the teleconferences, participants can share screens and link in to cloud storage like Dropbox. As a whole, the RingCentral Enterprise level is to the high end Cisco and Polycom Telepresence what hosted PBX is to a traditional PBX: instead of large and expensive equipment, RingCentral offers a smaller, more mobile version, that they host for a monthly charge. RingCentral exclusively gets their meeting platform from Zoom. A quick look at Zoom’s web page shows that mere mortals can get access to their service for as low as $7.99/month. One can only speculate as to what kind of deal RingCentral made with Zoom, but knowing RingCentral’s huge customer base, it looks like the agreement was a shrewd move for both parties.

VoIP’s Competitive Marketplace
To be sure, RingCentral’s hosted PBX service is not lacking. With over 300,000 customers, RingCentral is definitely a top player. Even their most basic SMB package boasts the best deal in toll-free calling, a respectable fax plan, and mobile apps. Nonetheless, the new package stands as an answer to smaller VoIP providers that have powerful platforms of their own. Vocalocity was acquired by Vonage, the company that brought residential VoIP to the masses. Vocalocity recently revamped their Desktop platform, adding new Salesforce CRM integration, among other features. Fonality has its Fonality Five, a strong feature set that’s part of top-level desktop software. 8×8 continues to add patents to their portfolio. Nextiva’s NextOS is also dynamic and improving all the time. The list goes on.

For the business consumer, the trend is skewing in the direction of having more features available at a higher price, with the lowest tiers still rarely going below $25 per month, except for the forwarding services like eVoice. Hosted PBX adoption rates are nearing 75% for medium-sized businesses. The competition is no longer incumbent PBX systems, but with other hosted VoIP providers. VoIP providers like RingCentral want to differentiate themselves from the competition with their higher-end offerings, preferring to highlight the advantages of their software rather than race to the bottom on price.

Who, then, is the market for the new Enterprise tier? I see three major advantages for RingCentral. First, there is the anchoring effect. If an SMB is looking at a hosted solution, the Enterprise class might be out of the range, but the “Premium” middle tier looks like a better deal, as compared if RingCentral only offered two tiers. Second, there is the aspirational market. A company with 500 employees may be considered the median for a medium-sized business, but the features of the highest tier may be well worth the extra money. Having the ability to have meetings with 25 participants at a time may be a very useful feature, and even more so for companies that have employees who work from home or are often on the road. There’s less of a need to come into the office if the office can come to your hotel room or home. As GetVoIP has surveyed, employees are willing to accept lower paychecks for the privilege of working from home. RingCentral’s new tier offers a new tool to do that. The third, obviously, is the actual enterprise market. All you have to know is basic math to realize that a business with one thousand employees, paying $45 a seat, equals $540,000 per year for RingCentral. Since Fortune 500 companies can afford to buy the type of equipment that VoIP providers host, VoIP providers must offer features that warrant the huge expenditure of changing over to a hosted solution compared to sticking with their existing contractors. For any enterprise-class business that chooses RingCentral, the cost savings of BYOD is trumping the “wow factor” of huge telepresence rooms.

The Market is Massive
RingCentral’s latest feature set is indicative of the hosted VoIP market as a whole. We have constant innovation, integration of cloud services rather than on-premise hardware, and competitive pricing. We can be sure that other VoIP providers will respond with more goodies as part of their premium tiers or long-term contracts. This is just a prediction as an analyst, but I think the next step for other VoIP providers may include contracts with other vendors and hardware manufacturers. We may see a hosted VoIP provider make an agreement with a large wholesale club or electronics retailer; we may see VoIP providers sell or give away smartphones and tablets instead of IP phones; and, of course, we may see a provider offer enterprise-class meetings with up to 100 participants. Whatever the next step is for hosted VoIP providers, you can be sure that the winner will always be the customers. We will continue to see more features that add productivity and add to the businesses’ bottom line.