Study: 37% of Americans Are Against In-Flight Cell Phone Use

2014 may see the end of the FCC’s twenty-two year long ban on in-flight cell phone usage. Earlier this month the FCC met to discuss the future of their self-imposed ban, which resulted in a 3 to 2 vote in favor of lifting the ban, or at least considering doing so. Though some welcome this change, and even deem it necessary, others reject it and call into question the practicality of this dissolution.

While the federal commission has their own reasons for reviewing this ban, many Americans are caught in the crossfire. Sure, many have taken a side in the matter, either pro or anti; however, the vast majority remains unsure, or even uninterested. So, to find out where most people stand, GetVoIP conducted a survey of 2000+ Americans ranging all age groups. In participating, respondents answered one key question: Do you support in-flight cell phone use? 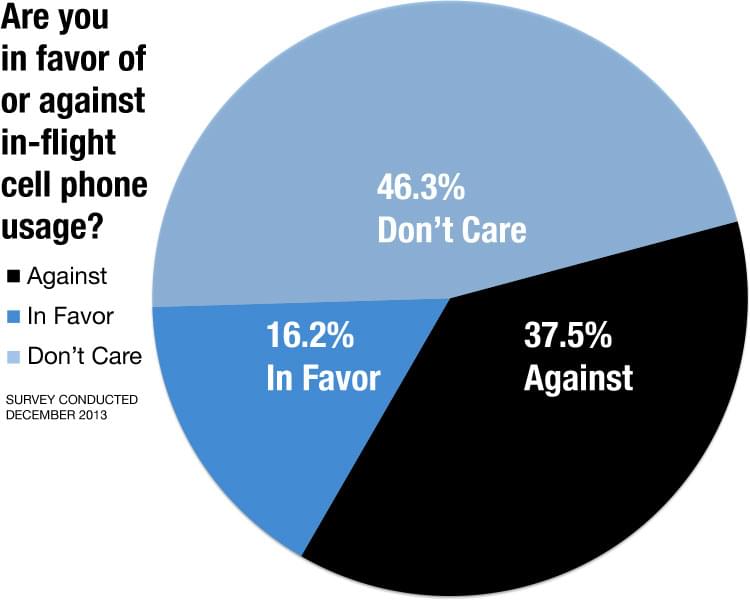 What’s The FCC’s Reason For Change?
Simply put, the FCC’s move to review, amend, or otherwise alter their ban comes in the name of modernization. Established in 1991, the ban was set in place to avoid communications from interfering with ground based communications. Since then, however, new technologies have essentially fitted planes with their own cell towers, which makes the ’91 ban all the more obsolete. “Where the rationale for the rule doesn’t exist, the rule shouldn’t exist,” states FCC Commissioner, Tom Wheeler. Essentially, the initial ban was put into place for safety-related reasons; however, those reasons are no longer practical. Therefore, the FCC feel that the ban itself is in need of review.

That being said, many Americans may move to believe that this change is necessary. It makes sense after all; however, most Americans are still divided on the matter.

Do Americans Really Support In-Flight Cell Phone Use?
The reality of this matter is simple: most Americans are just plain indifferent. Less than 20% of respondents replied in favor of in-flight cell phone use; however, the remainder wasn’t against the in-flight usage either (less than 40%). Instead, the majority, which was upwards of 45%, replied that they simply did not care. With than in mind, one has to wonder why the FCC seems so deadest on reviewing, amending, or even dissolving their band. 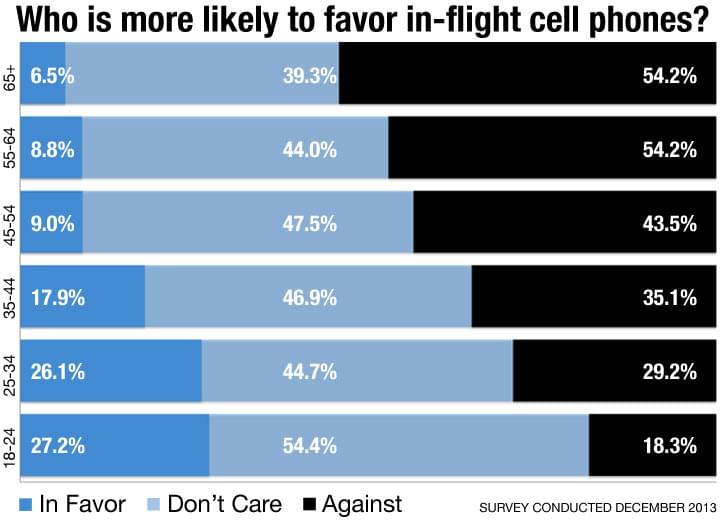 Americans 45-54 Are 8% More Against In-Flight Cell Use Than Those 35-44
The spikes in numbers of those against removing the ban jump as groups get older; however, aside from the first grouping, they are not as significant. For example, about 35% of respondents between the ages of 35-44 replied against in-flight cell phone use. Additionally, around 43% of respondents between the ages of 45-54 replied the same way. That’s a rise upwards of 8% over groups only a decade apart.

46.3% of American Just Don’t Care About In-Flight Cell Phone Usage
Despite the variances between those for and against, a sizable portion of respondents from every age group reply indifferently—i.e. they don’t care. Though this number is not always the highest percentage, it is always sizable, and worth noting. Why? Because it is far less predictable than the other classifications.

Americans 18-24 Are 15% More Indifferent Than Americans 65+
Indifference is not affected by age as systematically as the percentages for and against; however, age does seem to have some affect. Yes, there is a very big disparity between the age groups at opposite ends of the spectrum; however, this deficit is not gradual. Instead, this percentage fluctuates sporadically. For example, there is a very big drop between ages 18-24 and 25-34 (around 10%); however, across ages 25-34, 35-44, and 45-54 this percentage increases by about 5%.

Why Most Don’t Americans Care About This Ban?
Many Americans may not care about this issue because they simply feel their opinion is irrelevant. Sure, the FCC has their own ideas and agendas, but so do many other departments, commissions, and agencies. For example, the Department of Transportation (DOT) announced their consideration of their own ban, which would prohibit in-flight calls aboard airliners. Additionally, airlines such as Delta and Jet Blue have already stated that their current policies will remain the same, regardless of the FCC’s reconsideration.

With this in mind, many Americans may lack interest in the matter because of the lack of urgency. Sure, there are many in favor of lifting this ban, but there are even more opposed and even indifferent; therefore, it might not happen. Additionally, even if the FCC is able to push any changes through, many agencies and airlines have already rejected their terms—which again results in little or no change.  Americans may not be invested because they feel there isn’t much, if anything, at stake. As such, many remain indifferent and/or uninterested.

Methodology
GetVoIP surveyed 2001 Americans via Google Consumer Survey Tool throughout December 2013. Those who participated were asked the question: Are You In Favor of or Against In-Flight Cell Phone Usage? Respondents were given yes, no, and “don’t care” response options. Google gathers responses by requesting answers in exchange for access to premium content.

Michael Ventimiglia
Michael has extensive experience in a number of fields ranging from journalism to copy and technical writing. Mike currently resides on Long Island, where he pursues his interests in the arts, more specifically music, literature, and film. Mike’s...
More posts from this author