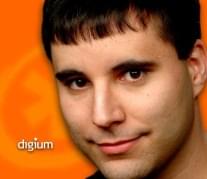 In continuation of our Leaders & Innovators series, GetVoIP.com is proud to present an exclusive interview with founder, chairman, and CTO of Digium (now Sangoma), Mark Spencer. Born and educated in Auburn, he wrote Asterisk as a personal solution to the high costs of PBXs, which inevitably became a renowned, cost effective telephony platform for the masses. At a young 35, Spencer has achieved more than most individuals can hope to in their entire lifetime. With a fervor for technology dating back to his later years in elementary school, Spencer is best associated with a distinct pattern of bringing things “to the next level”. As a top open source software, Asterisk relegates users the freedom to modify, change, and improve upon their communications. Spencer released Asterisk to the world back in 1999, and it has since become one of the most downloaded platforms on the market.

Digium are constantly updating their offerings, improving the industry at large through certification and training courses, new integrations, and builds for their breed of IP phones. Developers, partners, and others from the community come in droves for their annual three day conference at Astricon to learn more about the communications tool kit. The company just concluded its fifth Asterisk World event at the ITExpo in Miami as well. Spencer is often on hand at these events, giving powerful keynote addresses to large technology audiences. Aside from providing insights for the community, Mark continues to be a driving force in the seemingly infinite strategic vision and direction of Digium. We had the opportunity to ask him a number of questions pertaining to where the company has been, and where it is going…

How is Digium setting itself apart from companies that have been in VoIP hardware for longer?

Mark: Asterisk has always been about pushing the limits of what we could do in terms of communication.  Our focus traditionally of course was on the server side, the PBX, conference gateway, etc.  However, we reached a point at which we truly felt constrained by the limits of the traditional SIP, analog and other IP handsets in the market.  We also felt like the experience wasn’t as smooth for integrators because you’d sometimes have “dead keys” that didn’t work as expected or required unusual keystrokes to implement features.  It became increasingly obvious that we needed to have an endpoint that could supplement Asterisk and Switchvox not just by integrating more cleanly with both (including everything from provisioning to conferencing and voicemail), but that would be extensible by integrators and end users to allow their own applications at the device level to interface with the sophisticated technology they could create on the Asterisk and Switchvox side.  So ultimately, this was really about extending the reach of the developer beyond the backroom and right to the desktop.

Of course from the business side, it also helps us better monetize the Asterisk marketplace because not everyone needs an analog or digital interface card, but nearly everyone needs a phone. By properly differentiating our product line, it helps us diversify the revenue stream we use to support the company and the project itself. Asterisk has always been about pushing the limits of what we could do in terms of communication.

How would you describe the office environment and culture at Digium?

Mark: I think we have a unique culture at Digium  – we have always tried to ensure that we make it a fun place to work and not just the status quo.  We push the boundaries as much as practical — I’m somewhat famous around Huntsville for having a hammock in my office in which many a coworker has come to sit and talk about what was on their mind.  Of course as we’ve grown, just what people think is fun has changed a bit (not everyone in sales likes to wear flip flops and listen to loud electronic music while they work for example), so we try keep a balance and stay focused on being as relaxed as possible about things that aren’t core to the business, while being very tied to metrics on the things that are.  For example, what an engineer wears, or if an engineer has a huge pet rabbit they bring to work, well that doesn’t really make much of a difference in terms of our product.  However, the timeliness of our tech support team is very important and the appearance of our sales team may matter depending on the customer.

We make an effort to keep people connected to the goals of the business including monthly meetings and quarterly “town hall meetings” where we talk openly about the company’s performance, opportunities and challenges. On the lighter side of things, we celebrate monthly birthdays, have bagels every Friday and have many volunteer opportunities where people can get together for fun projects that also make a difference in our community.  Once, I even took a popcorn machine around the office, powered by a bunch of universal power supplies and delivered hot popcorn to everyone at work.  We’re a pretty active group, so it’s pretty common to see our team running, walking, riding or meeting for soccer, tennis or racquetball.…even the occasional game of ping-pong downstairs, masquerading as a meeting.

Can you explain how the name Asterisk came about?

Mark: The Asterisk symbol is the wildcard symbol in Linux, Unix and even DOS. Since I rarely think small, from the beginning, I wanted Asterisk to do everything in telecom (of course oblivious to the challenge associated with that) and felt the name was appropriate (not to mention it is a key on the keypad of the phone, so a little a little pun in there too – a tradition in open source software titles).

Following the tech crash of 2001, how did Digium manage to ‘pick up the pieces’ and push forward?

Mark: Actually, the tech crash of 2001 was one of the most important and beneficial events in Digium’s history.  In fact, had the crash not occurred, I’m not sure that so many early adopters would have been willing to take such a chance on an unproven product to initially make the change to Asterisk that enabled us to bootstrap the business.