A Brief History of the Telephone Number 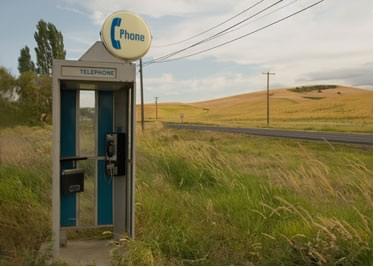 The first telephones had no numbers at all. In the nascent days of the telephone, telephones were sold in pairs. You would turn a crank and that would generate electricity to ring a bell at the other end. Over time,  the existing telegraph infrastructure was modified for telephones. Operators would connect person-to-person, and this was possible because the pool was so small. It was common for operators to be familiar with everyone they talked to.

It was an outbreak of measles in the town of Lowell, MA during late 1879-early 1880 that inspired telephone numbers. Dr. Moses Greeley Parker was afraid that the town’s four operators might all fall ill, and so he suggested that the town’s 200 subscribers have numbers so that new operators could easily be trained should the need arise. Parker later became a major stockholder in the American Telephone Company, and the New England Telephone and Telegraph Company, the precursors to AT&T.

Each digit on the phone from 2-9 had three letters, and Q and Z were left off. Long before the practice of vanity numbers, the first two, digits denoted the town or area. The remaining digits came after connected the individual. Within the area, it wasn’t always necessary to dial the first digits. At first, there were three local digits, then later four.  In the 1930s, New York was the first city in the US to use the standard of two letters, then five letters, such as “Pennsylvania 65000,” to signify the Hotel Pennsylvania, which was immortalized in song by big band leader Glen Miller.

Toll free dialing was introduced in 1967 by AT&T in what was originally called “automated collect dialing.” At first, it was a novelty, but by the 1980s, centralized databases created a huge boom in that area. In a practice that continues to this day, smart businesses would buy a vanity toll-free number that was easy to remember and would bring in business. The prefix “888” was introduced in 1996, and “877” and “866” were introduced in 1998 and 2000, respectively.

In the days of rotary phones, areas with the most populated areas had easy to dial area codes, such as 212 for New York City. Originally, the number “1” as the second digit would signify long distance, but as more numbers were taken, 11-digit dialing, the practice of dialing 1 before a long-distance call, became prevalent. In some areas today, you have to dial ten or even eleven digits to reach a local number.

The future of telephone numbers is no numbers. Most of us have cell phones that remember phone numbers that we forget as soon as we input them. There are only a finite number of numbers to go around, and we’ll see the load-balanced out by SIP addresses, used in conjunction with click2call and IP phone shortcuts. We’ll likely see a huge adoption of wired VoIP and wireless VoLTE, which has better sound quality. Speaking only for myself, I predict that phones of the future will have a feature that lets you transfer, either wirelessly or by “bumping,” your own phone’s SIP credentials to another phone, and instead of dialing you will enter or say the person’s name to “dial.”