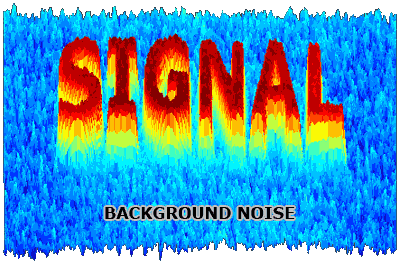 A signal-to-noise ratio (SNR) is the comparison of the desired signal to unwanted noise. In telecommunications, the signal can be your voice, or even video information, and noise can be feedback, hum, hiss, grainy image quality, or anything else that degrades the quality of the signal.

A ratio higher than 1:1 indicates more signal than noise. While SNR can be an extremely technical term that is determined by complicated formulas, it is also easy to understand outside the technical realm. If you are at a party and there is music, other people talking, and music, and you are talking to another person, there is a lot of noise that degrades the quality of your signal. In fact, in such a situation, you would probably have to strain to hear your friend and have him repeat himself many times, just as you would if you were having the conversation over the phone and had a degraded signal. If you were in a large empty room and there was a slight echo, that counts as noise as well, but in this case it would be very low. If there were a slight echo over the phone it would be much more noticeable. The engineers who design electronic systems like VoIP phones, audio codecs, and home theater systems, take human perception into account when they design those systems.

The signal to noise ratio can be affected by a number of factors, but the most common factors happen inside the wires, so to speak. Cable modems, for example, are designed to operate within certain dB ranges. If there are signals that go outside that range, it can temporarily go out of sync with the cable modem termination system (CMTS), which is the equipment at cable provider’s installation that provides high speed data service. As a result, there can be packet loss or other poor performance. This interference is often caused by other electronics, such as a microwave or cellular phone. The FCC specifically has legislation to avoid electronics interfering with each other, called Title 47 CFR Part 15, or, as you may have seen on a sticker on nearly every piece of electronics you own, including VoIP phones, simply “Part 15 of the FCC rules.” The market has also responded with newer technologies designed to work at higher frequencies, and tend not to interfere with each other, such as DECT. Even over the same network, the quality of the hardware can make a noticeable difference. We here at GetVoIP.com have tested phones for sound quality and found, not surprisingly, that newer phones sound better than older ones.

Analog distortion and digital distortion have different qualities. When there is too much gain in a signal, it is overdriven. Overdriven signals distort. In an analog environment, such as a guitar amplifier driven by a tube, the sound can be quite pleasing. Overdriven digital signals tend to chop off the high and low ends of a signal, also called the peaks, making it choppy and unpleasant. While there is some room for distortion in art, when it comes to communication, you want the signal to be as clear as possible.