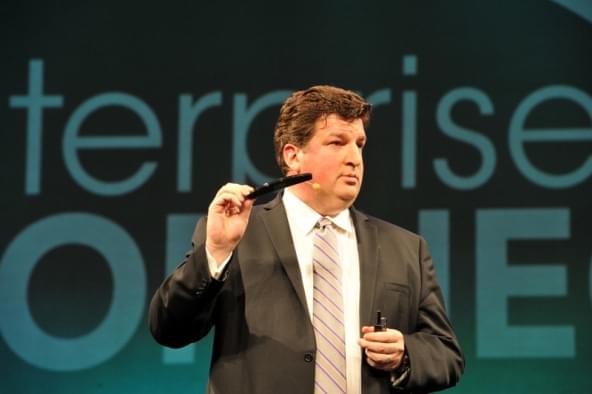 Today, CCO of Siemens, Chris Hummel shed some light on things that weren’t exactly so clear. The first, was elaborating upon just what a CCO is – Hummel describes his position at the company as an “everything else” sort of role. That is, his responsibility is to touch upon the less tangibles and make them reality, along with “doing the things others don’t want to do”. With this considered, Hummel noted that Unified Communications thus far, has not delivered – yet not all is lost, as the potential is undoubtedly there. With this potential, comes a promise – to make that potential an achievement. Hummel emphasized before getting into the meat and potatoes of his keynote, that keeping this promise is a formidable challenge, with the consumer not exactly helping their own cause.

This promise, more specifically, is to allow unified communications to take all different communications channels and bring them together, harmonizing the business process. Again, this is the end goal rather than the current state of being. Chris did not give any inkling of this uphill battle being utterly hopeless, projected that voice, video, data and more, “asynchronous”. The promise doesn’t end there, as it’s also to include focus on however you communicate, followed by unifying it in an approach that all people use, optimizing it to your specific business.

‘Bringing it all together’ is not an outcome, rather its a technical capability. Enhancing productivity, saving money, etc – it sounds great in theory, but is extremely difficult in practice. The reality is despite all the standards and approaches, the offerings are too diversified for consumers to be universally connected, thus the terms unified and communications have become mutually exclusive.

Chris accurately called the technology a stovepipe, as in a paradoxically pigeonholed excellence in communications, rendered incomplete due to incompatibilities. The responsibility inevitably falls on the consumer – with a “unified” solution always ending up being adopted by too few. The value again, is extremely high, yet the execution is imperfect – on the same wave,  impact is high while adoption is extremely low. Only 15-20, maybe even 35% of IT workers use a unified communications solution. This number needs to be corrected in order for this to ever work.

Providing support and encouraging teamwork, while delivering information, analytics. In the process, the goal is to create the “anywhere worker”. Unifying the platform is the next step, making all services (tablet, smartphone, windows, iOS) able to coexist and exchange without any compromise. According to Hummel, employing mobility should be  the “norm rather than the adjunct”, and I couldn’t agree more.

Siemens has interestingly been swapping out chips in desktop devices in favor of mobile chips, focusing on the UX in what’s become common practice at the company. The ultimate goal among many in all of this, is to embed capabilities into the way you work. In reiteration, Siemens is addressing all these issues by improving user experience that drives adoption, integrates into the way you work (such as e-mail, which gained popularity when it became part of the work flow) and delivers on that promise by creating a platform, whether it be traditional, cloud-based, or otherwise.