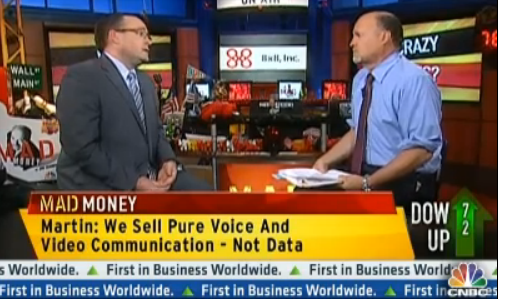 8×8, Inc. Chairman & CEO, Bryan Martin, appeared on Jim Kramer’s Mad Money to discuss his company’s transition from small to medium business customers, the value of its patents, and what to expect in the future. Jim’s initial assumption was that 8×8’s stock wasn’t much to call home about (pun intended), yet Bryan was quick to dispel those doubts by revealing the current and long-term success 8×8, Inc. is shaping up to be in a highly competitive telecommunications market.

As a company, 8×8 has undergone a huge transformation, starting as a semiconductor company ten years ago, and working their way up to the top of the business VoIP ladder. About ten years ago, 8×8 was forced by the internet crash to become a service provider, moving from the residential VoIP market into the business market. That exact market is the smaller end, with Bryan noting the average customer buying 14 lines from the company. Mr. Martin continued by giving mention to 8×8’s devotion to being more than a long-distance provider – rather, a turnkey solution including phones and service, along with capabilities and features to engage interoperability and mobile use.

Bryan used an interesting term by accrediting 8×8 as being  “hardware & bandwidth agnostic”. That is, 8×8 does not sell any data, and is purely geared towards marketing voice and video communication. The conversation continued by touching on 8×8’s patents (along with their most current, 83rd US Patent), cross-licensing, and exactly how vital that is to the provider as a business and service.

Martin and Kramer then segwayed into some future insights: in the past two month periods, access lines are going down for the last two years, and have since stabilized. However, even while the market is declining, the penetration of this type of technology is already at 8.2%, while the home phone market is up to as much as 30 percent. Bryan believes the business sector will follow suit as far as the boom in access lines.

Working beyond past disappointments, 8×8, Inc. now stands as a “worthwhile investment”, and there are many reasons why. In the past 18 months, 8×8 has started making sales to larger enterprises (about 50-1500 extensions, their biggest client). Kramer closed by saying he was still “speculative” because of the size of 8×8, but did use the term “compelling”, a large leap for an otherwise skeptic (and in most cases, rightfully so) finance and stocks critic. As the fiscal year comes to a close, 8×8, Inc. shows little to no signs of slowing down with remarkably solid foothold in the industry.