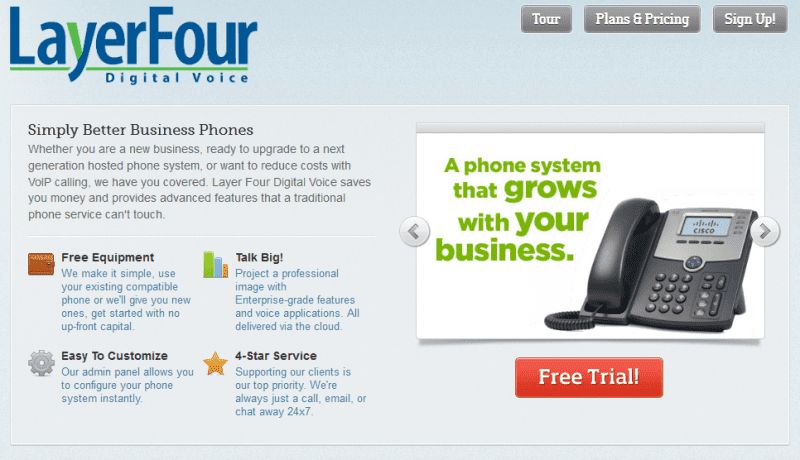 Layer Four Digital Voice is both hosted and managed. It’s pretty common in the VoIP industry to share space and even equipment with other VoIP providers or web service providers. Layer Four, on the other hand, owns all the equipment, and maintains their hardware in secure facilities. This is surprisingly rare. It should come as no surprise, though, that a company known for their existing infrastructure would make their own backbone available to their VoIP division.

Layer Four has straight ahead pricing. They have three metered plans, which include a mobile only plan, and one unlimited plan. The virtual PBX plan, which starts at $19 monthly—not monthly per user—and each inbound phone number is $4.95. It includes only 800 minutes, which are 1.3 cents after that. That’s a solid plan for small businesses. The mobile only plan ($14/mo/user)  is similar, with 1,000 minutes, 1 local number included. Both the virtual PBX and Mobile plans are BYOD. The professional plan ($24/mo/user), which supports up to 50 extensions, includes free equipment and two local numbers, but still gives you only 1,000 minutes. The unlimited minutes plan ($29/mo/phone) offers the same feature set. It seems unusual that even the premium plan only includes two phone numbers, but much less so once you understand that each phone number supports up to 25 simultaneous calls. Additional phone numbers are $4.95 each, and toll free numbers are $8.95, with one included in the professional and unlimited plans.

The pages that listed the features were, in a word, understated. The graphics were small, and you couldn’t enlarge them with a mouse click. The page also had a lot of sales and tech jargon, such as “Our SOAP and REST based APIs allow you to integrate your phone system into any application,” and “Access your complete CDR history online or through the REST-based API.” Rest assured, though, Layer Four provides the feature set you’ve come to expect, and a few extras, such as Text2Speech and a Click2Call widget.

Customer support is open 24/7, which includes help chat, a knowledge base, and phone support. Layer Four has a 30 day free trial. If you cancel your service, you’ll be billed for PSTN calls, but not VoIP calls. Surprisingly, you don’t just get a free equipment lease, you can actually keep your equipment if you cancel after 12 months. Given the fast pace of VoIP and UCC hardware innovation, perhaps that isn’t as good a deal as it may sound. Still, it’s another rarity, and goes to show the confidence Layer Four has that you will stick with them as your business needs grow.

After reviewing Improcom yesterday, I’d say the experience of navigating their respective web sites is about the same. These are straight ahead companies are short on flash, but long on value.