In Color! Features of the Cisco SPA525G IP Phone 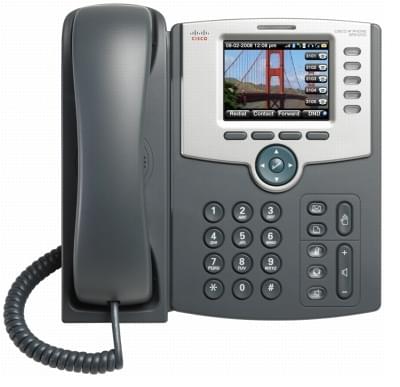 As part of my trial with RingCentral, we bought a Cisco SPA525G2. Now I hate to nitpick, but they sent us a SPA525G. It’s one generation behind, not the promised SPA525G2. I doubt there’s much difference between the two. But still, if ordering an almost $400 IP phone, I would have expected to have the latest version of it, being that technology and software is updated at the speed of light these days.

The first thing I noticed is the color screen, obviously. Having used the PolyCom 550, I can tell you that the color screen is more than a gimmick; it really makes it easy to read the caller ID, go through the preferences, and select the lines. In contrast to the PolyCom 550, the SPA525G has four buttons lines up vertically, instead of four buttons in a rhombus shape—this also makes it easier to see what button you’re pressing for what command. Staying on the screen, the phone has a lot of preferences that you can play around with, including selecting from about a dozen rings, picking out a “screen saver,” changing the network settings, and so on. You can set your built-in Wi-Fi and Bluetooth, change rings, use news and weather widgets, even play MP3s.

I have to get hypercritical for a moment, and tell you the few things I didn’t like about this phone. The interface gets a little confusing. It isn’t a touch screen, and the soft keys can make it a bit daunting. For example, the phone has a weather widget. The screen said “enter a zip code or search for a city.” The most natural thing at that point would be to just enter the zip code on the phone keys. Instead, it acted more like a cell phone text, and I had to press, for example, 2,2 to get to “B,” and the “0” key adds a space. I’ll admit this is a pet peeve of mine, (my Blu-Ray player is the same way,) but to me this whole concept is entirely unacceptable. You have a device with a D-pad, you can select a letter that way. Cycling through letters with number keys is so 1990’s. Also, if it says “enter a zip code,” and you have a phone keypad, this should be a no-brainer. And, here’s another annoyance: as I fiddled with the zip code, I saw a “back” softkey, and not a “main menu” softkey. I pressed the back button a few times, and without paying attention, I hit the call-return button, which was the same softkey. Maybe other people pay attention to how many times they press a button, but I prefer to just hit “back” until it can’t go back anymore. Errant button pressing is bad. Speaking of bad buttons, let’s also point out that the menu hardkey has an icon of a folded document, like a scanner. That’s also confusing. And, if I’m going to talk about strange things about this phone, I have to mention the one thing that was missing that blew my mind: No visual voice mail notification. We can put a man on the moon, we can create a supercomputer that can win a game show, but we can’t have an icon of a “full envelope” to tell me I have voice mail. Where’s my jetpack, I thought this was the future!

Let’s get back to the good things about this phone. It has a USB port, which is for uploading MP3s and pictures on to your phone. It has built in Bluetooth and Wi-Fi. The sound is phenomenal. The HD voice comes through clearly, either through the speakerphone or the handset. You can seamlessly switch between the handset and the speakerphone with no beeps or drop in audio. The volume key also doesn’t beep at you, and it has a very nice decibel range. You can also “pre-dial” and skip the dial tone. The hard buttons, other than the document, are intuitive. The Cisco SPA525G has a hand button for hold, an envelope for voice mail, a crossed out microphone for mute, and headset and speaker buttons, too.

The verdict: The Cisco SPA 525G is a great IP Phone. As much as the aforementioned details annoy me, they are pretty common in the way that hardware is designed. (As I said, my Blu-Ray player has the same problem.) Which brings us to the advantages of Unified Communication: the phone can have all those little annoyances due to its form factor, but I can overcome them all by using my computer. If I have a voice mail, my email will notify me. If I want to change the way my phone is set up, I can change it on my computer. I can add contacts into the RingCentral portal, and within a second the caller ID info is in my phone. Once you get the phone up and running, the SPA 525G promises to be an easy-to-use phone that will save you time and hassle every day.

Here is the unboxing and assembly video: